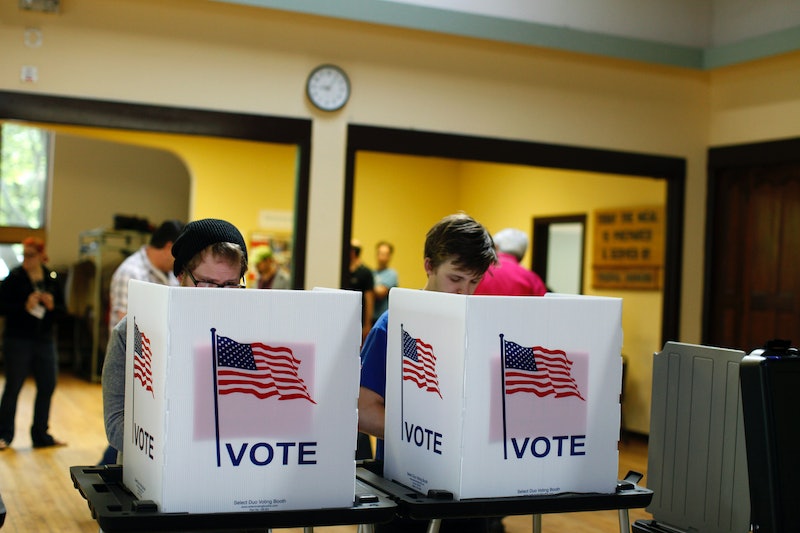 Right now, the big talk about the 2016 presidential elections centers on who’s running, who isn’t, and what every contender’s odds are looking like. But, before you know it, the talk will move from speculation to reality, and we’ll be done musing on who we want to vote for and actually cast a ballot. This season, the biggest days are those when a new competitor announces a presidential bid. But come next spring, the biggest day will be Super Tuesday. But what is Super Tuesday, and why should you care?

Super Tuesday refers to the Tuesday when the biggest number of states in the U.S. holds their primary elections and caucuses. This specific Tuesday, as The New York Times puts it, is the "closest that Americans get to a national presidential primary." This is a huge day for candidates. On Super Tuesday, the direction of the campaign largely starts to take shape, and candidates prove just how electable they are as they accrue delegates.

If a candidate wants to win 2016, they’ll need to do well on Super Tuesday. While the exact date of this year’s Super Tuesday remains up in the air, it usually occurs in either February or March. In the 2012 elections, Super Tuesday took place on March 6. Ten states partook in that Super Tuesday, but it was nowhere near one of the biggest Super Tuesday’s in 2008, in which almost two dozen states held primary contests on the same day.

While 10 states still have yet to solidify primary contest dates in 2016, at this point it looks like Super Tuesday may fall on March 1. On that day, seven states — Colorado, Massachusetts, Oklahoma, Tennessee, Texas, Vermont, and Virginia — are set to either hold a primary election or to caucus. However, the entry of the 10 other states on the calendar could easily skew which Tuesday ends up having the largest number of states.

Moreover, The Wall Street Journal reports that Southern states might have something special cooked up for 2016’s Super Tuesday. In what could become a big moment in the 2016 GOP primary, seven southern states might be planning a Super Tuesday together. While non-Southern states could also hold elections on that day — which, according to The Wall Street Journal’s report in February, would be on March 1, 2016 — this Southern group would be composed of seven powerhouse southern states: Texas, Florida, Georgia, Tennessee, Alabama, Mississippi, and Arkansas.

If this Southern state Super Tuesday pans out, Democrats will likely have to focus even more so on doing well in early contests in Iowa, New Hampshire, South Carolina, and Nevada. Because with Texas and Florida ranking as the second and third most populous states, respectively, and as the home states of a few GOP contenders, this Super Tuesday could have some massive implications for 2016.

More like this
What To Know About Martin Bashir After Watching 'The Crown'
By Bustle UK
Matt Hancock Broke a Major Rule With I’m A Celeb
By El Hunt
Florence Pugh Just Wore Two Different Color Boots & I'm So Into It
By Dominique Norman
'Waterloo Road' Is Back, With More Than A Few Familiar Faces
By Sam Ramsden and Vivian Iroanya
Get Even More From Bustle — Sign Up For The Newsletter