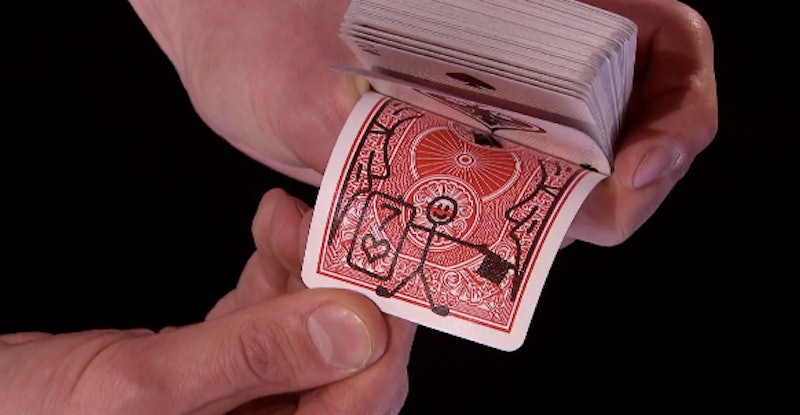 Kudos to those who can appreciate a good magic trick without the apprehension of a philistine, because Jamie Raven of Britain’s Got Talent (current home of known bitter human and furry chest-pie champion Simon Cowell) has somehow pulled off the greatest card trick of all time, or at least, one that should be in the running for such a title. Jamie, who had his sleeves rolled up and had the camera tight-zoomed on his hands the entire time, somehow also managed to literally pull money out of thin air during his set, wowing both the audience and the judges. Jamie if you’re reading this, I know a girl with some student loans for whom you could work some of that “magic.”

So here’s the deal: Raven explained that this was one of the tricks he first performed upon meeting a woman he’d later marry. It’s one he’s worked on for many years, and it was an interesting stunt to watch. What was totally bizarre, however, was the way Cowell’s face looked at the end. It’s not that he didn’t look surprised, but maybe he seemed too surprised. Maybe the calloused panel judge expressed too many words of support that outed him as an accomplice to Raven’s gig, because it was Cowell’s card call that was ultimately called.

Call me crazy, but something about this feels fishy. A master sleight-of-hand can pull of making even the simplest of card tricks look complicated. But this one’s so grand, so elaborate, and seems to rely too heavily on too many variables that I wonder in earnest whether Cowell was in on the whole thing. Take a look to decide for yourself: