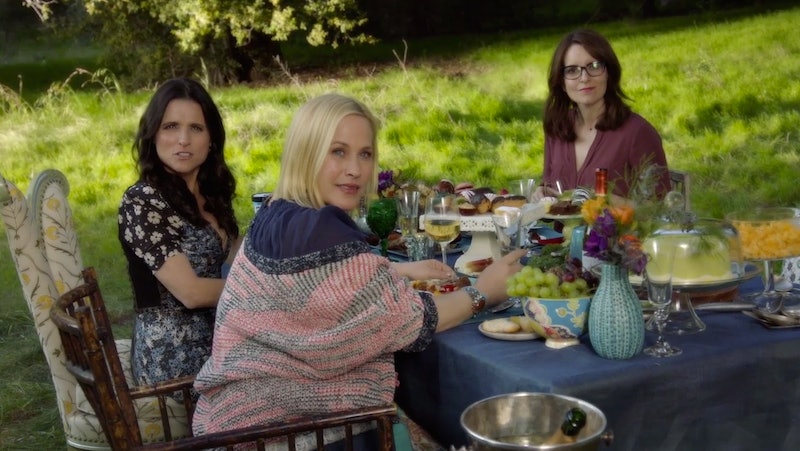 Imagine taking a jog in the woods, only to come across the most lavish table of food in a clearing with Tina Fey, Julia Louis-Dreyfus, and Patricia Arquette all dining together. Well, that's the premise for the Inside Amy Schumer Season 3 premiere sketch, Julia Louis-Dreyfus' "Last F**kable Day." The episode, named after the sketch, aired on April 21 and was pretty much perfect from start to finish — and the gang of Arquette, Fey, Louis-Dreyfus, and Schumer was the cherry on top.

In the sketch, the older actresses ("older" as in older than Schumer — not "older" as in actually old) are enjoying this beautiful day outside to celebrate a special occasion — Louis-Dreyfus' last f**kable day. See, according to the media, there is a day when a female actor is no longer seen as being believably, well, f**kable. Fey uses the example of how Sally Field was Tom Hanks' love interest in Punchline, but his mom in Forrest Gump (which was filmed less than 10 years later). As the women explained to Schumer, when you become "unf**kable," your choices in roles change dramatically. For example, all of the actresses had just auditioned for the role of Mrs. Claus — but Jennifer Lopez got the job. Because she's totally not f**kable...

Of course, Schumer — and any civilized person — knows that all three women are extremely sexy and thus, f**kable. But Inside Amy Schumer is holding no prisoners when it comes to its "feminist agenda" for Season 3, lampooning the fact that men in Hollywood never have a last f**kable day. (See: Jack Nicholson.) Arquette lamented the fact that she wasn't hired for an AARP TV spot because the director thought she was too old to portray Larry King's wife.

In a great twist, Louis-Drefyus is actually pretty thrilled to lose her f**ckable card: "I can grow my pubes out." Truly — in Louis-Dreyfus's words — it is a "Godsend" to no longer be considered f**kable. *Drinks entire carton of melted ice cream*

And there's no use trying to delay the inevitable — women will become unf**kable no matter what. As Louis-Dreyfus said (before following up that pint of ice cream with an epic burp and fart), if you get plastic surgery like The Real Housewives, you'll end up looking like "a purse that melted in a car accident." Plus, if you reach your last f**kable day, you get to be honored in a Viking funeral-style farewell — aka just going home in a rowboat while smoking a cigar. Can I do that now, come to think of it?

Although the trio of Arquette, Fey, and Louis-Dreyfus only knew Schumer as "that girl from the television who talks about her p**sy all the time," the women provided Schumer with some sage advice. While Schumer may be considered f**kable in her new movie Trainwreck , her day of unf**kability will come — just like it did for the Emmy Award-winning Fey and Louis-Dreyfus and the Academy Award-winning Arquette. But maybe when Schumer's day comes, she can star in the movies titled Whatever It Takes or She Means Well (you know, "something with a kitchen on the poster") alongside those other hilarious, yet apparently unf**kable, women.