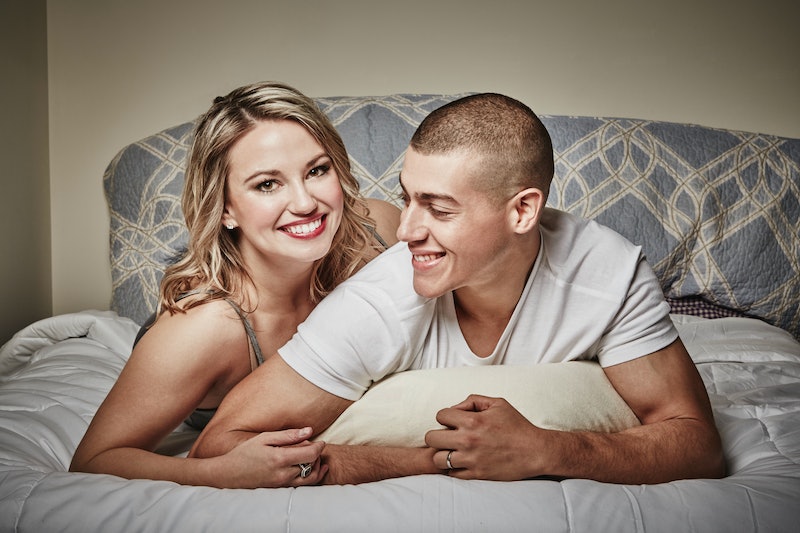 If you thought The Bachelor was the most out there reality show about finding love, you're wrong — Married at First Sight now holds that title. From the moment I heard about the show, I knew I'd love it, and when the first episode of Season 1 matched up Cortney and Jason, I was hooked. Doug and Jamie might have started out messy on that first episode, and Monet and Vaughn were clearly not meant to be together, but Cortney and Jason? They seemed perfect for each other from the first moment they met at that altar. They might have been the youngest couple to participate in the experiment, but they knocked it out of the park, and even though they've definitely faced their share of obstacles, Cortney and Jason made getting married at first sight work.

Because really, who in their right mind would agree to meeting their future husband or wife at the altar? Thinking about putting myself in that position is terrifying. How did FYI find people who actually wanted to do this? And then, you watch the show and you realize that it takes truly adventurous people to do it, and that's exactly how I'd describe Cortney and Jason. Want to convince someone to take on this experiment? Introduce them to those two. After watching them for a season, it's obvious there are plenty of reasons to love them.

They had instant chemistry.

From the moment they met, it honestly did seem like fate that Cortney and Jason would be matched up. When Jason was obviously a ball of nerves at the altar, Cortney was miraculously able to keep her cool and remind him to breathe. And to me, that's a perfect example of what marriage should be: Being what your partner can't be for them in tough moments like that.

They face real problems and make it work.

And not just problems unique to people who have only known their spouse for a matter of weeks, but issues any couple would face, too. Where to live, odd working hours, stupid, nitpicky fights — Cortney and Jason dealt with it all, and they were always able to set aside their pride for the good of the relationship.

They sacrifice for each other.

As someone in a long term relationship with a firefighter, I know what Cortney and Jason both had to give up during those months that Jason was in the fire academy. It really is as hard as it looks. Remember how Jason was gone all the time and when he wasaround, he was exhausted? And how he couldn't be around for holidays, leaving Cortney alone? That's exactly what it's like at first, and it's hard to maintain a relationship, especially a new one, with that kind of stress placed on it. But they got it done!

When Cortney went home to see her family after feeling homesick, she came back to New York to find that Jason had moved all their stuff to a bigger, better apartment, even though he was working constantly and was exhausted. When you want to make a relationship work, you have to do stuff like that. You have to find time to make the person you're with feel important, and these two have it down.

Their second wedding was too cute.

Although I could have definitely done without the orange suit, even if it is perfect for Jason.

And they just took the sweetest trip to Disney World.

More like this
Nicole & Chris Hinted They’re Still Together After 'Married At First Sight'
By Brad Witter
It's Official: Molly-Mae Hague & Tommy Fury Are Parents
By Sophie McEvoy and Sam Ramsden
'Love Island' Has Added Yet Another Bombshell To The Villa
By Bustle UK
'RHOP' Stars Robyn & Juan Reportedly Got Remarried & Filmed The Ceremony
By Brad Witter
Get Even More From Bustle — Sign Up For The Newsletter
From hair trends to relationship advice, our daily newsletter has everything you need to sound like a person who’s on TikTok, even if you aren’t.