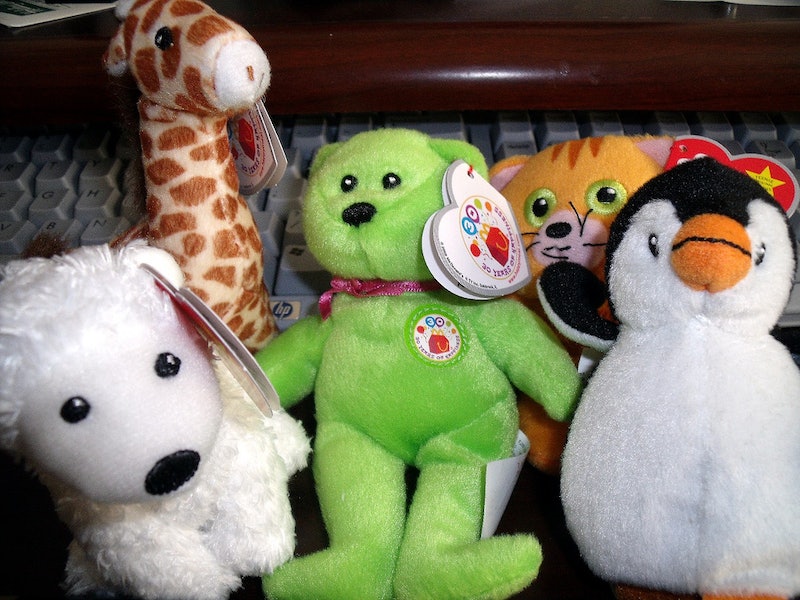 Although it's undoubtedly been many years since most of us thought of our Beanie Babies, there's no denying how much we loved them back in the '90s. But with the resurfacing and subsequent auction of Princess the Bear over the weekend, I got to wondering: Where might our favorite Beanie Babies be now? Is there some sort of Beanie Babies: Behind the Music we could consult? I mean, it's been over 20 years since they were first introduced — so if they were real, what might the retired Beanies have gotten up to in the meantime?

Ty first launched their Beanie Babies line in 1994 with nine original animals: Legs the Frog, Squealer the Pig, Spot the Dog, Flash the Dolphin, Splash the Whale, Chocolate the Moose, Patti the Platypus, Brownie the Bear (who was later renamed Cubbie), and Pinchers the Lobster (sometimes known as Punchers due to an error on his tag). They soon became a bonafide craze; people scrambled to collect as many as they could, with “retired” designs upping the ante considerably. By the early 2000s, though, interest in them began to fade; Ty almost retired the line completely a number of times, although the plans to do so never really stuck.

Beanie Babies are still around these days (and in a few different forms, at that); they've never seen quite the same amount of popularity in recent years that they did in the mid to late '90s, though, so for most of us, they're just fond memories. But if our favorite Beanie Babies really were retirees, what might they be up to? To be fair, I didn't actually talk to them (because they're, y'know, stuffed animals)- — but if I had, I imagine the interviews would have gone something like this:

Bongo wasn't always called Bongo. He doesn't really like to talk about it much these days, but when he first hit the scene, his name was actually “Nana.” Why the name change? “Well,” the monkey tells me as he lights up a cigarette in the bar at which he's agreed to meet me, “I realized that 'Nana' wasn't exactly a hip and happening name. If I wanted to achieve any sort of fame — any at all — I needed to make a change. So I figured, why not go with Bongo? I'd been playing the drums for so long by that point that it just seemed to make sense.”

The choice was a good one; his musical career took off shortly thereafter, with the height of his popularity granting him everything he'd dreamed of and more. “The kids, they loved me,” he reminisces. “I played birthday parties, mainly; it was a good gig to have. All I had to do was play my drums and look cool.” He still looks cool, if a little older — but then again, we're all getting older, aren't we?

Bongo isn't going by Bongo anymore, either, by the way. By the time he played his final farewell concert at the end of 1998, he had had enough of fame. “At that point, I realized that everything I thought I had ever wanted — the spotlight and all the attention that goes with it — wasn't actually what I wanted anymore. Maybe I had never even wanted it to begin with; I'm not totally sure anymore,” he says. So he withdrew from the limelight, settling deep in the jungle with a few trusted pals and loved ones. He spends most of his time these days just hanging out: Swinging in trees, eating bananas, and grooming his buddies. “It's the simple things, you know?” he says. “All this” — he gestures with his cigarette, which he calls his “one vice” — “it's just bells and whistles. I'm happiest when I'm away from it.”

He's requested that I not reveal his current name so as to protect his privacy. It's a request I'm happy to grant; retirement is treating him well. I thank him for taking the time to venture out of the jungle and into the city for one last interview. He's earned a good, long rest.

Garcia knows he stands out in a crowd — “It's the tie-dye fur, you know?” he says — so he's mostly just decided to roll with it. “I've always marched to the beat of my own drummer, so to speak,” he tells me as he scoops ice cream into a homemade waffle cone at his home in Vermont. “You want some?” he asks, gesturing at the carton. I pass; he licks the scoop. “More for me, then!” he laughs.

Although he suffered from bullying in his youth, the brightly-colored bear was an immediate hit when he arrived on the scene as an adult — largely, it's believed, due to his refusal to conform. “I think it had something to do with the fact that I was just so kooky. Still am, you know? But at the time, being applauded for your kookiness wasn't super common. I like to think I made a difference,” he muses, “The things that make you 'weird?' They're also the things that make you special. We should celebrate them, not make fun of them.”

But alas, Garcia's moment in the sun was to be a brief one, indeed. Due to his similarities with a certain rock musician, he was shelved in compliance with an alleged lawsuit. Shortly after he went into what some might call forced retirement in May of 1997, a new Beanie hit the scene — one who looked mysteriously like Garcia himself. His name was Peace, and he, too was all the colors of the rainbow. The only difference? He had a peace sign tattooed across his chest — and he didn't share a name with anyone else, either living or dead.

That was when Garcia bought his house in Vermont and took up residence in the state. Although he had never been a woodsy kind of guy when he was younger, he likes it in the forest and near the mountains; he enjoys “the freshness of the air.” It also doesn't hurt that he's made friends with the creators of a much-lauded local ice cream company — hence his freezer stocked full of all his favorites. “Not going to lie — this cherry-flavored one with the fudge chunks? Definitely the best,” he says.

Does he resent having been cleared away in favor of another bear almost identical to himself? “Nah,” Garcia scoffs as he takes another lick of his ice cream cone. But then he pauses. “Well, maybe a little,” he admits. “It stung at the time, but I've gotten over it since then. It's been almost 20 years, you know? You can't hold a grudge; it'll kill you to keep all that rage pent up inside. Besides,” he adds. “Peace is a cool dude. We hang out sometimes.”

Garcia has also continued campaigning against bullying in his old age. “It's still a problem,” he notes; indeed, he adds, “In some ways, it's even worse now than it was back then. But every little bit helps — so every kid we can encourage to be different and accept differences, instead of trying to squash them into society's arbitrary molds, the better.” He pops the last of his ice cream cone in his mouth. “Life's more fun when you're weird, you know?

Chocolate the Moose has seen a lot in his time. One of the original nine Beanies first introduced in 1993, he was also the last of that set of nine to retire at the end of 1998. “People went nuts for us,” he tells me in the living room of his comfortable suburban home. “I've never seen anything like it, and I hope never to see anything like it again. Isn't that right?” he adds, giving the tiny little moose sitting next to him — the spitting image of him — a chuck under the chin. The mooseling giggles.

Chocolate's home is full of these miniature creatures; he takes care of them when they have no where else to turn, and the love and devotion he clearly feels for each one — and they for him in return — is palpable. His house is a sanctuary for these “Teenie Beanies,” as they were known, and he's never been happier than he is now.

Fame never sat well with Chocolate; even as he profited off it — “And boy, did we all profit,” he says — he couldn't help but feel there was something a little bit troubling about the manic way in which people collected his kind. “I mean, all we needed to do was exist, and everything we could ever possibly want or need followed,” he tells me as he adjust the spectacles sitting on his nose (his eyesight isn't great these days). “But why? It never made any sense to me, this fame-for-fame's-sake thing.”

But it was only when the Teenie Beanies arrived that he began to have an idea about how he might use his fame for the forces of good. “I was there — I saw how crazed people got over them, and how quickly they tossed them aside once the fad had begun to wane,” he says. “And even though their popularity faded with each successive generation, they just keep making more of them. But what were the poor things to do once their owners no longer had a use for them?”

Chocolate bought the house — a two-story affair with a finished basement — with his earnings from his years as a public figure and renovated it himself. Then he opened his doors to whoever needed his help, and they've stayed open ever since. “I figured if I was going to be independently wealthy at such a young age, I may as well do something useful with it,” he says.

He still keeps a candy jar in the kitchen, by the way. His trademark poem once described his sweet tooth — and it's never gone away. “We all need a few indulgences, don't we?” he chuckles.

More like this
Remember These Ancient Pieces Of '90s Tech?
By Lucia Peters and Emma Carey
11 Trends From The ‘90s That Made You Feel So Cool
By Julie Sprankles
8 Creepy Things You Probably Did In The '90s
By Julie Sprankles
David Schwimmer Doesn't Remember This Classic 'Friends' Episode
By Sam Ramsden
Get Even More From Bustle — Sign Up For The Newsletter