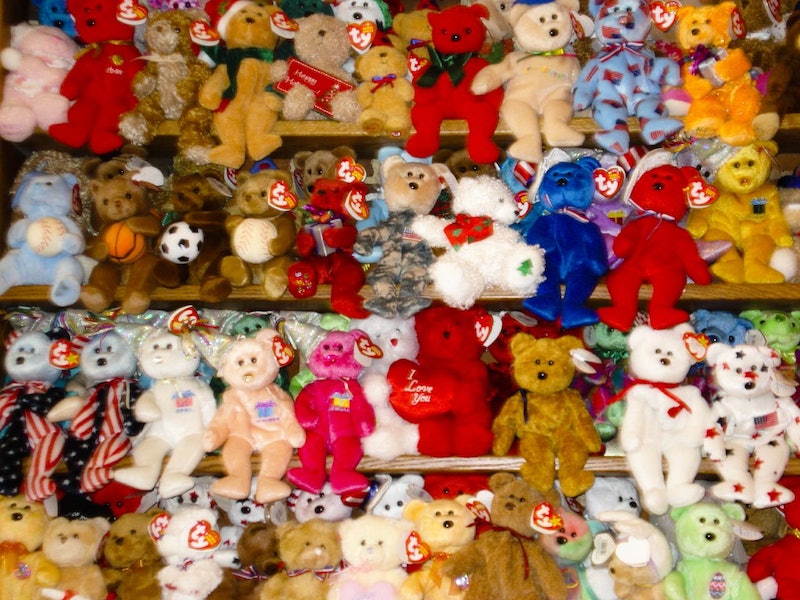 In light of the couple currently trying to sell their Princess Diana Beanie Baby on eBay for $30,000 after picking her up for about $15 at a flea market, it's perhaps unsurprising that a lot of us nostalgia-loving folk have Beanie Babies on the brain again. We've taken a look at how much these little guys tend to go for on eBay a few times… but can you really put a price on fond memories? Apparently yes. Yes you can. But even as we consider the dollar amounts of these loveable bean bag toys, let's take a walk down memory lane. Remember these 14 Beanie Babies you absolutely had to have?

I was in middle school when Beanie Babies were at their height, and I was an unabashed collector of them. In retrospect, perhaps it was odd that I was so fervently devoted to them; I'd never shown any interest in collecting things as a hobby before, nor have I taken it up in any measure of seriousness since. But I did love stuffed animals — although I had and loved several American Girl dolls, stuffed fuzzy creatures were always more my jam than Barbies or whatever — so maybe that explains it. In any event, there was one independently-owned store on my hometown's Main Street and an outpost elsewhere that stocked Beanie Babies — and I was there all. The time. I even had a whole bunch of little handmade “sleeping bags” for them in order to make sure they were comfy at night. Not kidding.

It will surprise no one that I owned pretty much all of the Beanies on this list. I think my parents ditched them when they moved out of the house in which I grew up (and all the way across the country) a number of years ago — which is totally fair, given that I am a fully-grown adult who shouldn't be using her parents' house as a storage unit. I still think back fondly on these floppy, bean-stuffed toys, though. Don't you?

Introduced on January 7, 1996 and retired on May 5, 1997, Garcia was coveted mostly for his tie-dye exterior. I highly doubt anyone under the age of 15 who had him was at all interested in the Grateful Dead, but maybe I'm wrong. Thoughts?

Garcias with misprinted tags can go for a couple thousand bucks on eBay, but more typically he's available for less. As Bustle's Pamela J. Hobart noted over the weekend, though, be careful of falling prey to the “the asking price is high, so it must be worth it!” fallacy — an observation that applies for the prices in the higher range for all of the Beanies that follow.

Peace was pretty much exactly the same Beanie Babie as Garcia; the only difference was the peace sign emblazoned on his chest. I had both of them, for some unknown reason. Like Garcia, Peace can fetch a pretty penny (around $2,000) on eBay if he's unique in some way, but he's also available for around $15.

Bongo had a long and healthy run between his introduction in August 1995 and his retirement in December 1998 — although interestingly, he wasn't always known as Bongo. His original name was Nana. Typically he goes for about $15 on eBay, although there are some exceptions: The one seen here is up for $99, and there are other rare ones going for anywhere between several hundred and several thousand dollars.

My love of moose coincided with the popularity of Beanie Babies, so of course I had Chocolate. This little guy has the distinction of being the last of the original nine to be retired: He was available from January 1994 through the end of December 1998. Chocolate could fetch between a few bucks and several thousand on eBay, depending on what year your particular model dates back to.

Due to the birthday listed on Patti's tag — January 6, 1993 — she's believed to have been the very first Beanie Baby. One of the original nine, her color changed from time to time; she was always somewhere in the magenta/fucshia/raspberry family, though. The most expensive Patti on eBay is going for more than $10,000 (!!!) because she has a double tag; you can also get her for about $3, though, if you're willing to settle for one made in 1997.

Personally, I just enjoyed the fact that Tank, who was around for about a year in 1995, was such a dramatically different shape than all my other Beanie Babies. He may not be the most expensive of the bunch — his priciest listings on eBay are for about $130, with most of the others being in the $5 range — but I mean, look at him. He's adorable.

Daisy was the first Beanie Babie I ever got; I believe I was given her as a gift. I insisted on calling her Moo Cow, though — it's anyone's guess whether my refusal to call her by her given name bugged her. A plain ol' Daisy can be yours for just a few dollars on eBay — but Daisies dating back to her year of origin (1994) can go for as much as $775.

In retrospect, the Princess Diana bear is perhaps a little questionable. It seems more than a little gauche to capitalize on a notable death by selling really expensive stuffed animals. Regardless, though, there's no denying that a Princess in good condition these days is pretty valuable. Again, I wouldn't actually expect yours to sell for $90,000 (or even $30,000)… but hey, I suppose you can always try if you really want to. Just bear in mind (pun not intended, I swear) that there are plenty of Princesses going $15 that are much more likely to sell.

Manatees were super huge in the '90s, so of course there was a Beanie Baby to celebrate the trend. Manny had his day in the sun between January of 1996 and May of 1997; these days, his pricess range between about $5 and $40 — which sound pretty reasonable, actually.

Even if you weren't into unicorns, odds are you had Mystic the Unicorn Beanie Baby. She first hit the scene in 1994 with a brown horn; by the time she retired in 1999, though, she had a much cooler iridescent horn. Her prices are all over the place on eBay, but that might have something to do with how many versions of her there were.

I had the green-y blue version of Iggy, but three different varieties were introduced during his run. You can get a set of all three for just under $120 on eBay.

I had outgrown my Beanie Baby phase by the time the Birthday Bears came along in the early 2000s, but I still like the idea of there being a themed bear for each month. Perfect birthday gift for the stuffed animal lover in life, much? You can snag the 2002 edition of the March bear for less than $5 on eBay.

Pouch was cool solely for gimmick: She actually had a little pouch on her tummy, complete with a little joey. She doesn't appear to be super coveted, with her listings mostly only going for a few dollars, but she's still kind of awesome.

I had almost forgotten about Peanut until I started writing this post. Mostly light blue, a few dark blue versions were accidentally produced and are now considered pretty valuable (even though you can get them on eBay for $30).