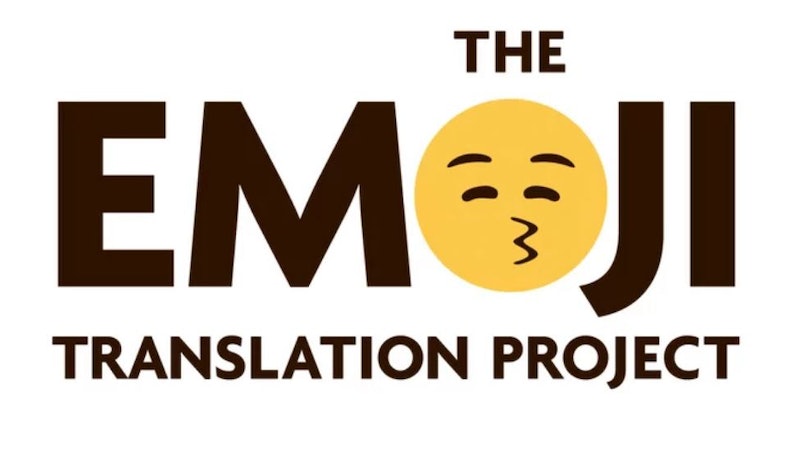 You know, for someone who ends up writing about emoji all the time, I don't actually use them that often. In fact, they're often a downright mystery to me — so it's a good thing that the Emoji Translation Project is on the job. Created by Fred Benenson and Chris Mulligan, this Kickstarter campaign hopes to give people like myself who are functionally emoji illiterate the tools we need to translate emoji expressions into English and vice versa. How awesome is that? Answer: Super awesome. Super, super awesome, even. So awesome.

You might remember Benenson from his Emoji Dick project, which translated Herman Melville's classic Moby Dick into emoji. While he was working on Emoji Dick, the idea occurred to him that maybe it might be possible to use the phrases from his version of the tale to create new sentences. That, of course, presented its own unique set of problems — namely, that you'd only be able to write sentences that sound like Melville — so what could be done to broaden the playing field, so to speak? Easy: Create an emoji translation engine.

It might seem a little goofy to put so much effort into translating English phrases into emoji and back again, but I actually think it's more than just a silly little diversion. As linguist Tyler Schnoebelen learned while working on his dissertation at Stanford, emoji have their own grammatical rules. Not only that, but they've actually evolved to be that way. They're clearly a language all their own, and furthermore, it doesn't look like it's a language that's going away anytime soon. As such, why shouldn't there be translation tools out there geared towards helping us figure out what it all means? Clear communication is key for so many things, after all. It just makes sense.

The Emoji Translation Project is twofold: First, to publish an emoji phrasebook; and second, to create an emoji translation engine. Here's what we can expect from each piece of the puzzle, if they manage to pull together the funding.

Think of this one like the sorts of phrasebooks we used to travel abroad with before smartphones and temporary international data plans: It will include a selection of commonly-used emoji phrases and their English equivalents — so no matter where you go, you'll have a handy little pocket guide to speaking emoji. Since this part of the project is an actual book, some of the funding will go towards printing it (and all of the other costs that go with making physical books). They're teaming up with Brooklyn-based design firm CHIPS on it, too, so you know it's going to look cool. Here's a quick taste of what we have to look forward to:

Which, incidentally, brings us to...

As cool (and as potentially useful) as the phrasebook is, let's face it: The idea of an emoji translation engine is infinitely more interesting. Granted, I was the kind of kid who would spend hours sending phrases through Altavista's Babelfish translation engine until I ended up with the most hilarious strings of gibberish I could create… but still. Translation engines are always super interesting,

Any kind of translation engine, explain Benenson and Mulligan, “requires massive 5amounts of text that exists in both languages.” But, while there's (obviously) a heck of a lot of content in English on the Internet, there's comparatively little in emoji. So that's where the Kickstarter money for this part of the project will go: To pay people to translate sentences from English to emoji in order to build up a big enough database of both languages. They estimate they'll need between $4,000 and $7,000 to pay translators for enough work to “ensure a viable translation engine.”

I get a little lost in the technical details, so I'll let Benenson and Mulligan tell you what the next steps will be once they've got their human-powered emoji and English data set:

We will then use those sentences to train a translation engine powered by statistics and machine learning. This method goes beyond a simple find-and-replace system, and actually models how ideas are represented in emoji, and then how simple ideas are composed to communicate complex ideas.

The end result will be an algorithm capable of translating any phrase from English to emoji (and back, we hope). Along with sharing the data, we’ll make the trained engine publicly available online for anyone to use, just like Google Translate. Just think of something you want to express in emoji, and press “Translate!”

There are a ton of amazing-sounding incentives, too (which is where the rest of the funding will go once the phrasebook and translation engine are created): Hardcover copies of the phrasebook, hilarious T-shirts, and even signed copies of Emoji Dick.

Head on over to the Emoji Translation Project's Kickstarter page to find out more or kick in a few bucks (the goal is to raise $15,000) — and don't forget to watch the pitch video while you're there. It includes emoji subtitles, and it is magical. Just sayin'.

More like this
Why Can’t I Go Live On Instagram?
By Emma Carey
Kris Jenner’s Advice For Kim Kardashian Is Going Viral On TikTok
By Courtney Young
How To Add Music To An Instagram Post
By Emma Carey
How To Use The Crying Filter On Snapchat, TikTok, Instagram & More
By Emma Carey
Get Even More From Bustle — Sign Up For The Newsletter