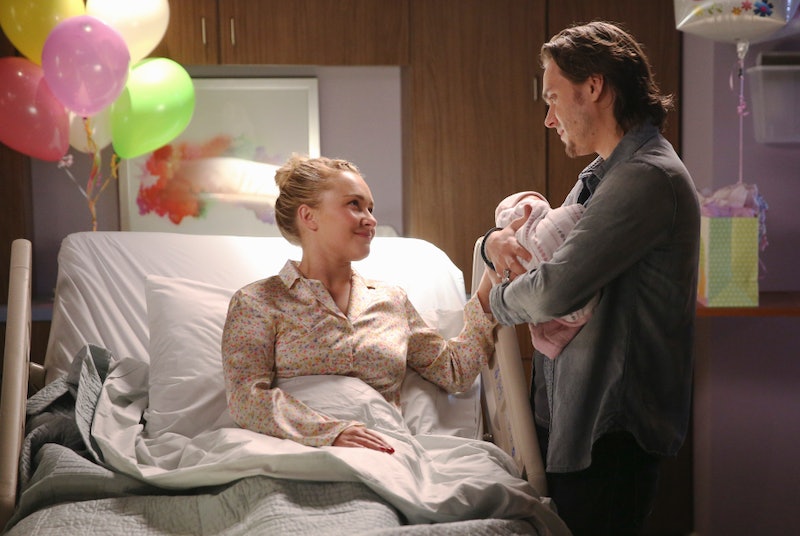 Juliette may be having trouble handling her baby and her music career at the moment, but with the birth of Cadence, Avery and Juliette officially became Nashville 's coolest parents (minus Rayna and Deacon of course). They both fell back in love after being brought closer thanks to Juliette's pregnancy, got married in the most low-key, honest way, and gave their baby an awesome, musical name. Cadence, for those who are not familiar, is a sequence of notes or chords at the end of a musical phrase. As someone who also shares a name tied to music, I'm not only a fan of Cadence's name, but I also find it to be a clever tie-in with Avery and Juliette's shared passion. Now the question is, will Cadence become a popular name to use on real-life babies in the world today? To be fair, there are quite a few TV babies with names that are certainly worthy of imitation.

From Emma on Friends to Lola, the newest addition to Lucious Lyon's family on Empire, there are dozens of babies from television that can inspire people to name their kids in the real world. These are just some of the names to consider, based not only on the names, but the personalities of the TV babies themselves.

Cecilia is not only an adorable name, but the kid herself is pretty cute. Should we really have expected anything different? Her parents are Jim and Pam, aka one of the most perfect TV couples around.

Sure, Emma's own aunt got her name wrong on multiple occasions, and Rachel stole the name from Monica (who ended up giving great names to her twins: Jack and Erica), but Emma just fits her name perfectly. And she's so dang sweet. I mean, think about it, this is a baby who at a young age already appreciated the rap stylings of one Sir Mix-A-Lot.

Georgina may be an annoying character, but she sure did a top-notch job naming her baby. Milo is all at once a sweet, endearing, intelligent, cunning, mysterious, and slightly nerdy name. Basically, his name incorporates his mother Georgina and almost-stepfather Dan's personalities.

Brady Hobbes, Sex and the City

Miranda named Brady Hobbes after Steve's last name and her own. Hopefully, Brady never changes his last name, because we don't want a kid named Brady Brady running around and causing trouble.

Sure, Dexter the series declined sharply in its last few seasons, but the one thing the show and its titular character did right was name the baby. Harrison is a sweet remembrance for Dexter's father modernized in a fun way. And Harrison is a precious baby, even if he did get covered in his mother's blood at one point. Poor kid.

Marvin Waitforit Eriksen, How I Met Your Mother

That middle name is gold. And it's nice that Marshall and Lily wanted to honor Marshall's dad by naming the baby after him. Though I have to be honest, I prefer Hurricane Eriksen. I just can't get it out of my head. Damn you, Ted.

The sassiest kid on TV, Lily Tucker-Pritchett made her name cool for a whole new generation.

Named after Liz Lemon (but also not really), Liddy gets two of the coolest parents in the whole world and got her nickname thanks to Liddy Dole, J. Gordon Liddy, and Jack's martial arts instructor Li Di. Also, Jack has her attend baby leadership conferences, so she'll probably become president before I make anything of myself.

Any Braverman is worth naming your kid after. They're all perfect.

Her mom may have had an affair with Lucious which makes the Lyon King her father, but she's still a precious child with a beautiful relationship with her half-brother/once-presumed father Jamal. Sure, she's not exactly a baby when we meet her, but she's young enough and she's cute enough so I'm counting it!

Obviously, any baby Eric and Tami Taylor have is going to be perfect. So when Tami gave birth to Gracie Belle, I immediately loved her and her extremely adorable name. If it works for the Taylors, I literally need no other explanation to make it work for me.

Brennan and Booth may have a child together now, but Michael Staccato is the original Bones baby. Plus, he has one of the best middle names around. Like cadence, staccato is a musical term which makes sense given Angela's father's profession.

A sweet name for an even sweeter kid. Her parents may have been going through a few rough patches lately, but she's still as adorable as they come.

As Leslie Knope would probably say, any baby of Ann Perkins is the most perfect and beautiful baby in the entire world. Or as Oliver's father Chris would say, "This baby is literally the best baby ever." Chris and Ann do a great job naming their second child as well: Leslie Traeger. Bet Knope got a huge kick out of that one.

The original awesome baby. No one beats Michelle Tanner.