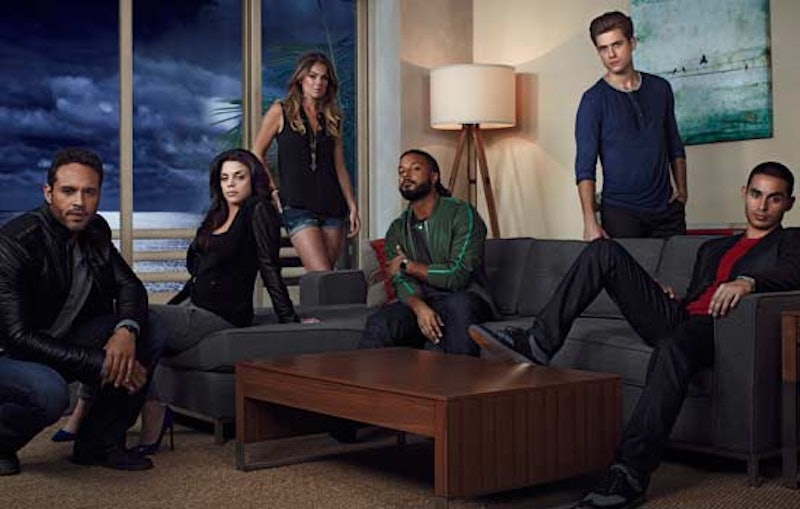 The end of each month means two things: payday is approaching, and we learn what the Netflix gods are giving and taking away. This May, one of several new releases will be Seasons 1 and 2 of USA's Graceland — which is amazing news, because Graceland is the coolest crime show you need to be watching. Its premise is downright bizarre (but based on an actual place): six agents representing different branches of the law (including the FBI, DEA, and ICE) all live in a beach house so gorgeous it will make you drool. Together they live and work undercover, solving gritty crimes — in addition to having spaghetti nights.

If that sounds like a strange mix of tones, fear not, it works — especially for summer watching. Graceland is not as light and frothy as USA's old school shows like Royal Pains. There's a bit of torture here and drug addiction there — but the light, domestic moments balance everything out. And, considering Season 3 is set to debut Thursday, June 25 on USA, that gives you plenty of time to binge watch the first two seasons before the Season 3 premiere.

Since I figured you might need a little extra convincing to watch Full House: The Government Agent Edition, though, I came prepared with handy dandy examples:

Tough woman with a heart of gold is a cliché for a reason — and Charlie is that reason. She plays the role of big sister to the rest of the agents, gets extremely invested in cases, and will still threaten to shoot the love of her life if he steps out of line. Add in the part where she once took drugs (despite being a recovering addict) just to keep her cover from being blown, and it becomes clear Charlie is the ultimate badass who will still make you her special marinara sauce if you have had a bad day.

Mike is a rookie agent sent to the Graceland house to investigate lead agent Briggs. While undercover, Mike develops a serious mancrush on Briggs, which makes his job much harder than he thought it would be. The duo have an intense, back and forth relationship where the power dynamic is always shifting. Deep down, though, they both know they are totally bros — and that makes for some heartwarming TV.

Obviously, I don't want to give too much away — but over the course of two seasons, Graceland has presented enough twists to give you whiplash. Loyalties change on an almost episode-by-episode basis, which makes for exquisite binge watching material — trust me, you will not be able to stop hitting "next episode" until you, well... see what happens next. (Note: If you have already watched the first two seasons on TV, an epic marathon serves as an excellent refresher course.)

One the very first rules Mike is told about the house is there should be no relationships between agents. Of course, that means he immediately develops feelings for Paige. Then, we have the intense chemistry between on again/off again lovers Briggs and Charlie, and a compromising relationship that develops between Johnny and a mark — so, basically, no one follows the rules ever and they all fall in perfect, inappropriate love.

The Domesticity Will Give You Life

Between all the missions and secrets, the agents are a family at heart. That means we occasionally get bonfire scenes, moments of the team goofing off at the beach, and teasing each other at the local bar. The camaraderie between Mike, Briggs, Charlie, Johnny, Paige, and the perpetually grumpy Jake keeps the darker parts of the show from overtaking the fun, summery goodness of it all.

Because Graceland Makes Everything Better

When I settle in for a good binge watch, I look for three things: quality, addictiveness, and mood. Graceland has the perfect mix of good writing/acting, pace, humor and seriousness, so it's totally binge worthy without being overwhelming — and Netflix is awesome for making it possible for us all to watch the first 26 episodes without interruption.

So, what are you waiting for?!

More like this
15 Romantic Movies On Netflix That Are Perfect For Snuggling Up On The Couch
By Rachel Simon and Grace Wehniainen
15 Intriguing Movies On Netflix That Are Based On True Events
By Mary Kate McGrath, Shannon Barbour and Grace Wehniainen
Everything We Know About When To Expect Money Heist: Korea Part 2
By Kadin Burnett
Wait, What’s Going On With Ben In That Umbrella Academy Season 3 Post-Credits Scene?
By Gretchen Smail
Get Even More From Bustle — Sign Up For The Newsletter