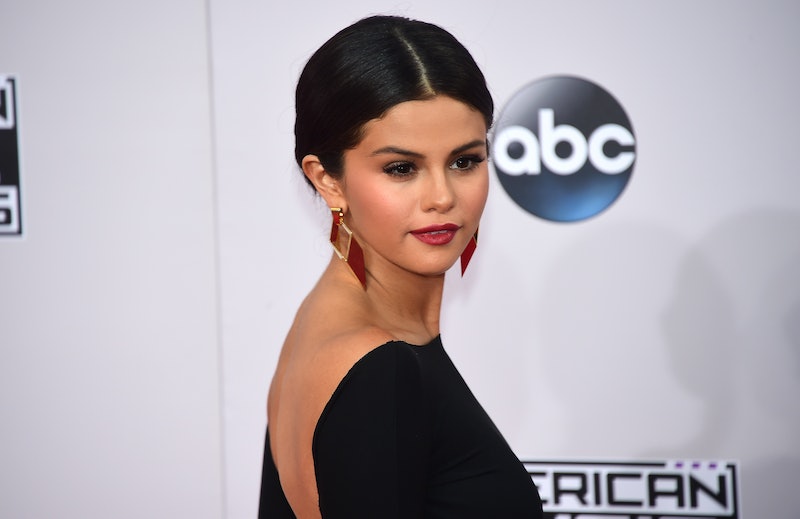 The Internet can truly be a terrible, horrible, no good, very bad place — as evidenced by the fact that Selena Gomez was fat shamed recently, wait for it, she wore a bikini on vacation in Mexico and did not look perfectly Photoshopped. Seriously, how dare she? While anyone with a conscience or the slightest amount of common sense or a semblance of empathy for other human beings has been contemplating how these trolls' behavior could pass as acceptable, the pop star has been busy turning something body negative into something body positive. As her best friend Taylor Swift would say, she has been shaking it off because she is a badass, body positive woman.

Tabloids absolutely hit a new body shaming low, reporting on Gomez’s “ill-fitting pink bikini” and oh so poignantly (insert the heaviest of sarcasm here) observing that the small amount of material was “working overtime to cover the 22-year old’s assets.” And yes, they offered up offensive word play, topping their post off with, “Things are getting thick down in Mexico," which is obviously the worst. Not because being fuller-figured is bad, and not because Selena Gomez is even fuller-figured, but because implying that people being fuller-figured is worthy of ridicule is hugely problematic.

The real story, however, is how, all the while, Gomez was busy enjoying her vacation and devising the perfect Instagram post to combat the hate, because good girls and positivity do get to win sometimes. Shortly after the Internet body shaming began — and the whole of digital media flipped its lid — the Hollywood sweetheart posted a photograph of herself posing in a bathing suit with the caption, “I love being happy with me y'all #theresmoretolove.” And she’s right. We do love her even more now before because brushing off the critics with self acceptance can only be appropriately described with emoji praise hands. Take that haters.

In the sea of shaming and body image issues, Gomez's public self acceptance message and attempt to stand up and silence the bullying was positive and perfect. However, she also inadvertently sends a strong message on the regular — from the red carpet to the beach — by choosing to wear whatever the hell she wants, regardless of the endless supply of critical eyes. Now, that is body positivity. Let's explore all the fashion freedom:

1. When she donned only a towel after being cyber bullied about her body.

No, it's not a fashion choice and she was likely "wearing" said towel for a photo shoot, but choosing to share this non-outfit on Instagram after being told her body was somehow unattractive: That shows she loves her body no matter what anyone else thinks.

2. When she flaunted positive messages for Seventeen Magazine.

3. When she owned short shorts for V Magazine.

In this sick world we live in, Gomez has felt the wrath of cyber bullies openly discussing her body. She has had plenty of shade thrown her way, yet she went topless for V magazine, donning only a pair of short shorts and pretty much flipping the bird to the haters, showing off both her assets and her confidence.

4. When she went from pretty princess to badass babe at the MTV Video Music Awards.

This dress made for a total Madonna-esque, I-am-woman moment at the MTV Video Music Awards. Gomez is a badass babe with a beautiful body and she wasn't afraid to show it off in this edgy number.

5. When she got inked with positive vibes.

While it was more of a beauty choice than a fashion statement, Selena made positive waves when, on her own journey to self acceptance, she got a tattoo that reads, "Love Yourself First." Amen, sister.

6. When she wore lingerie while talking feminism with Flaunt Magazine.

Flaunt she did while posing in black lace lingerie for photographer and well known advocate for women, Amanda de Cadenet, while also casually discussing her views on what is and isn't feminist.

7. When she went braless before #FreeTheNipple was even a thing.

You don't want to wear a bra? You go girl. I mean, when the spotlight shines heavy upon you, you must know the paparazzi will photograph you whilst frolicking about New York City braless, so the fact that she decidedly freed her nipples anyway is proof that she has little concern left for what others think of her body.

8. When she went public with her pajamas.

Because self-confidence is sometimes about wearing a pajama set in public and showing just how comfortable you are all covered up.

9. When she showed off her curves at the American Music Awards.

Hello! Miss lady has an hourglass figure and she is letting the world know that she has found the confidence to show it all off. Backless, red carpet braless and va-va voom.

10. Whenever she posts a swimsuit selfie.

Livin' ain't easy when you are putting your swimsuit-clad self on blast for all the world to see. Any woman — especially one with millions of eyes on her — gets props for loving their body and having the confidence to post a swimsuit selfie.

11. When she wore this dress on the Rudderless red carpet.

Gomez's candy apple red Dior mini dress screams body confidence. The short on the bottom, plunging on top, tight-fitting satin silhouette number bares her cleavage, shows off her legs, and could only be this expertly worn by someone comfortable in their own skin.

Selena Gomez, haters gonna hate, but you keep doing you.