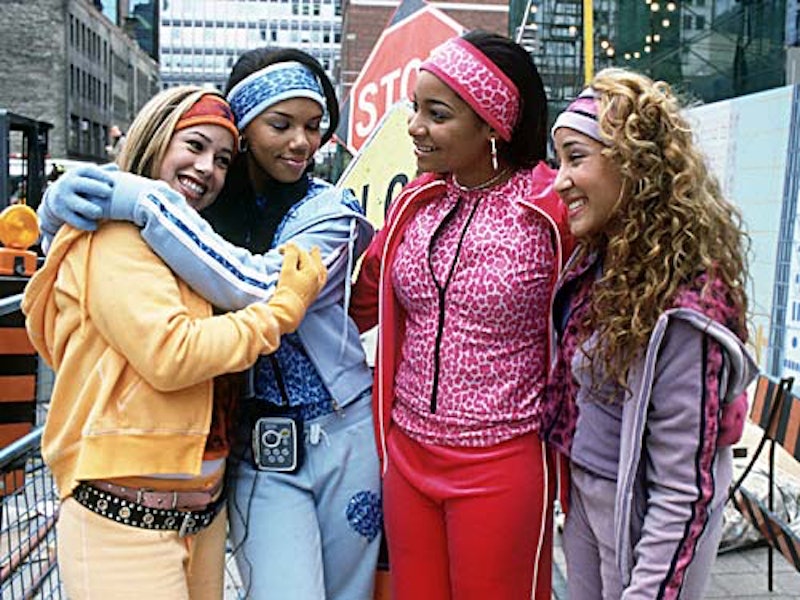 Arguable the most Cheetah-licious of the Disney Channel movies, The Cheetah Girls live in a strange, untouchable time capsule that I'm unable to understand. Like with most things in the early '00s, I was a baby goth detached from the world of bubble gum pop movies, so I never watched the 2003 classic when it first aired. However, now that my eyes have finally graced this film, I have to say — it operates sort of like a pink animal print. Which is to say, it's tacky, hard to look at, but secretly fun in its way.

And it has a classic plot: Galleria (Raven-Symoné), Chanel (Adrienne Bailon), and two others are looking for pop stardom as the Cheetah Girls and hoping to win their school talent show. Producer Jackal Johnson wants to sign them (or something) and thoughts of fame gets to Galleria's head. In-fighting begins, feelings are hurt, and issues between friends and family are tested.

The Cheetah Girls is in the same vein of Disney Channel sister movie Cadet Kelly: It's heart is well-meaning, but it's delivery is absolutely ridiculous to anyone who's over the age of 11 and living in any time after 2005. So while Raven-Simoné and friends definitely bring the attitude, it's hard to take the majority of the film seriously.

Especially in those outfits.

Anyway, enjoy this chronological account of strange things from this fierce film.

1. The average crowd at a Cheetah Girls concert.

Literal children, as it probably was in real life.

"14-year-olds in New York dancing whimsically as they reach for the stars and follow their dreams."

The fact that this chick's stage name is "Do Re Mi" is bad. The fact that her actual name is Dorinda is worse.

4. Galleria is apparently personal assistant to a dog named Toto.

Because her mom is all pissy about Galleria not walking Toto — a difficult task, I know.

Toto forgives her, because he's as merciful as he is powerful.

Yeah, no, that makes you sound weird and outdated.

So obscene, Cher Horowitz thinks you need to take it down a notch. Also she's not writing on anything.

7. "We call ourselves the cheetahs because they’re the fastest and fiercest animals in the jungle."

Fastest, yes, I took to Google to fact-check that part — but fiercest? That title definitely goes to the hippopotamus, hands down.

Everyone is so intent on this group huddle and she's thinking up ways to get out of her contract.

9. Their audition is whatever, until Toto takes the stage.

Injecting some fresh dance moves that really take their stage presence to the next level.

10. Then a guy named Jackal (...) shows up wanting to sign Toto onto his record label!

Oh, and the Cheetah Girls, too.

11. Obviously Toto records a sick demo to give Jackal the next day.

12. Jackal is casually flirting with these 14-year-olds.

13. The Cheetah Girls somehow get a huge crowd to listen to the story about how they talked to a moderately famous guy one and a half times.

Meanwhile nobody wants to listen to the story of how I once saw Ryan Gosling on the M train.

14. Jackal's entire marketing plan for the Cheetahs, which turns them into either...

D. The stuff nightmares are made of.

16. "They all came running when you sent up the Cheetah distress signal."

"No. They came running for Toto."

Aqua came by herself, so can we pump the breaks and wonder what the hell is happening here?

Actually, not so much of an incredulous thing given that this is 2003.

19. "We make up a big family/even though we don't look the same"

They said in matching track suits.

20. Finally, after a lot of drama, in-fighting and brushes with fame, Toto rejoins the Cheetah Girls.

21. And better yet, he wins the talent show, no contest.