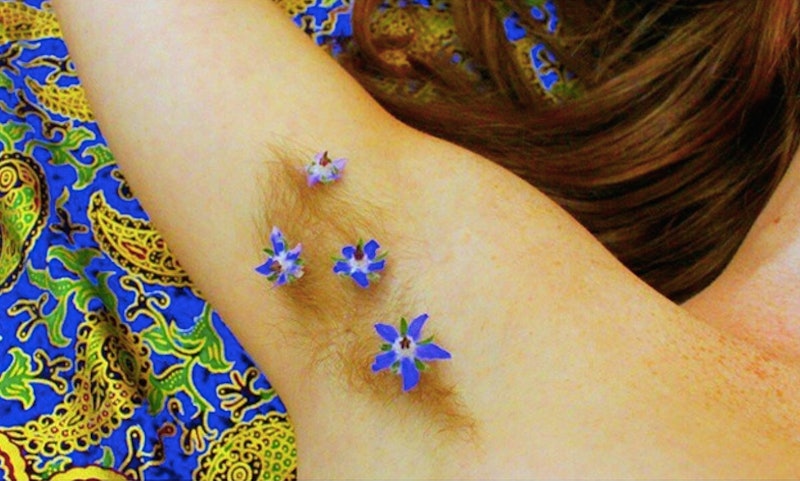 The body hair debate has been going on for a rather long time, and quite often it's paired with the seemingly simple question: Should women have to shave? Most people would likely argue that the conversation began in the 1970s, due to the rise of second-wave feminism, the hippie renaissance, and the consequent beauty trend of going au naturale. The Chicago Tribune even featured an article titled, "Shaving and Fashion: A Storied History," which reported how Jennifer Scanlon, professor of gender and women's studies at Bowdoin College, wrote in her book Inarticulate Longings: The Ladies' Home Journal, Gender, and the Promises of Consumer Culture that disengaging with practices such as shaving in the '70s and '80s was the "litmus test of feminism."

That said, there's quite a lot of evidence to suggest that women have shaved for centuries, going back as far as Ancient Egypt — when women "removed all of their body hair, including that on their heads, with tweezers (made from seashells)." (I am so glad I was born in the 1980s.) So it appears that the body hair debate goes back a lot further than we sometimes realize. At the moment, though, the general consensus is that most people hate female body hair. Like all things that aren't "mainstream," body hair on women is still seen as "gross," "unhygienic," or simply "unacceptable."

A few days ago, I was flicking through my new copy of the UK Vogue, and I came to the "More Dash Than Cash" supplement. I opened the front page, and was greeted by a model on a beach in a bikini and vest top. There was nothing out of the ordinary there, or so I thought ... I was looking at the models' sand-dappled legs and contemplating whether the sand had stuck to her organically, or if they had had to artificially stick it on (attending photo shoots has ruined the magic for me). Then I saw it.

On the leg furthest from the camera, there was an undeniable patch of hair. My first thought was that the editors must have left it in by accident, and that maybe someone on the team would be due a slap on the wrist. But then I contemplated, "What if they left it there on purpose?" The fashion industry is slowly changing to become more diverse and inclusive — what if this was a (tiny) step in the right direction to mainstreaming female body hair? I mean, people have started dyeing their armpit hair, so what's the problem with a little leg hair?

So I sat and I thought about why women shave in the first place. Which in turn got me asking myself: "Why do I shave?" I rewound my memories back to my days as a preteen. I remember it vividly — looking down one day and suddenly being presented with armpit hair. It was a bit of a shock, really. My mother was a dance teacher, and I had grown up tapping and pirouetting in shows. I looked around at the other girls, with their baby-smooth armpits, and I asked my mom to help me get rid of my armpit fuzz ASAP.

After embarking into armpit shaving, I suddenly became very aware of my leg hair. Every time I got changed for phys ed and sported my gym skirt, the teasing would begin. It wasn't malicious or truly hurtful — more like playful banter, since my friends knew where the boundaries of my patience and self-consciousness lay.

That being said, it must have had some effect on me, because it wasn't long afterwards that I asked my mom if I could shave my legs, to which she laughed and told me that I could do whatever I wanted. To this day, I am not quite sure why I asked permission to do something that was going to only affect my own body, but that's another issue in and of itself.

I concluded that I shaved due to societal pressures, and because I wanted to fit into the mainstream beauty expectation that women should not be hairy. After my thoughts on the reasons I shave/remove my body hair, I put the question to my friends and family, and the results were very interesting ...

Like Me, Many Women Shave Due To Societal And/Or Media Pressure

“I would prefer not to, because I think it's pretty stupid, the ideals of what a woman should be in society ... But then, I still do now and again, because of paranoia about being judged by society. Eugh, so stupid. I hate it!” — Anon, 25

“The media has led both men and women to believe that women shaving is the normal thing to do, and therefore we just do it! I feel as though I would be judged if I didn't do it! And seen to be unclean and slack by other women and men! I would still shave even if leaving hair was more socially acceptable, just because I prefer the way I look and feel! I maybe wouldn't feel as under pressure and worried if I had forgot, though!” — Martha, 21

“I have dark hair, so I need to. But I suppose it's because society tells me that I should. However, I do feel sexier / more feminine when I'm silky-smooth! I have issues with sensitive skin, though, and tend to only regularly shave more visible areas!” — Victoria, 25

“I shave my arms because I like the smoothness, but have done so from puberty. I shave my legs as they are dark haired and society dictates this. Pubic hair ... I did for a while, then stopped, as it was so uncomfortable and itchy. This was done for my hubby, not me. Although stray hairs in my bikini line are plucked to be tidy.” — Anon, 45

Or Simply Because It’s Seen As The Norm

“I was thinking, 'Why do I shave?' and it's because I want to be nice and soft and smooth, and hair isn't attractive! But why isn't it? It's like autopilot to shave! Thought-provoking question, ha! Who started all of this shaving malarkey?” — Anon, 23

“I keep my underarms done all the time because they prickle otherwise, and they're more likely to be seen by people. Leg-wise, I shave because it's 'normal.' It doesn't make me feel feminine, as usually my legs are spiky again within a few hours, and often shaving makes them feel super dry. Having said that, yesterday I booked my first-ever professional wax for next month, before I go on holiday — also due to laziness, as I just don't want to have to faff with razors while I'm on holiday.” — Amy, 25

Shaving Is Often Perceived As Being More Feminine, And Appealing To Men

“I shave so it's easier to clean. If you get what I mean. I also think men prefer shaven-clean bits. I think it looks cleaner and more feminine.” — Anon, 31

“I shave, and have to almost daily, as I am about as hairy as a man! Must be the dark hair, I think. I have been known in the past to take a razor to my arms, too. I get facial hair, too. If I don’t keep up to it, I'd have eyebrows that join in the middle, a nice handlebar stache, and one luscious, long strand of hair hanging down from my chin! I don’t mind doing it, as I don’t think the natural look would be in any way attractive on me at all! It's not that I am vain, but in the industries I work in, appearance does count, shallow as that may sound!” — Anon, 30

“I also think it is something imposed on women by women — it was my 'best friend' who ruined my 'Garden of Eden' bliss of hairy armpits in puberty! I was rather the exception to the rule when I was in my teens / early 20s. It appeared to disturb girlfriends that I didn't always shave — almost like I was letting down the side, rather than the reverse!?” — Julie, 51

But There's Some Sporadic Shaving, Too

“Personally ... I don't shave regularly, purely because I can't be arsed. If, however, I was going to a special event and I was wearing a short dress, I might shave my legs to make myself feel all nice and smooth. But other than that, I don't really bother. I asked my boyfriend if he preferred me to shave, and he said ‘Yes,’ and I said ‘Tough.’ I have really sensitive skin, and shaving irritates this. Also, the last time I shaved, I ripped a chunk of skin from my leg, and it didn't really feel like shaving my legs for one night was worth the few nights of pain and bloody bed sheets.” — Lucy W, 21

“When I think about the idea that people are denying their mammalian characteristics to fit in with social convention, it seems really weird. However, I guess it is down to personal preference on what you are comfortable with.” — Anon, 21

Some Women Shave For The Emotional Feeling It Gives Them

“Oh, but you just can't beat that amazing, silky-smooth feeling! Save the hair for your brows and barnet only! Haha.” — Lucy T, 27

“This whole body hair debate ... It annoys me when women make a big deal out of it! I like to shave, especially if I have my legs/armpits out, and when wearing a bikini in summer, etc. It's a bit of a faff, but when I can be bothered, I do feel much nicer for doing it. I don't blame anyone else for this. I don't blame the expectations of men or other women. I just feel nicer when I shave — but a lot of the time, I can't be bothered! And I bet it's the same for lots of women, in truth. My boyfriend doesn't mind either way. He loves me however I feel happiest.” — Anon, 24

And Others Shave Because It Makes Them Feel Cleaner

“Hair makes me feel unclean ... It's looked at as scruffy if it's not maintained.” — Stephanie, 27

“I come from a very dark and hairy family, and I feel more confident when I shave — and more hygienic. I have to shave every day, though; including my arms.” — Elizabeth, 29

“I shave because I feel cleaner that way. Also, I find that leg hair catches and itches my legs, and with already sensitive skin, this can lead to damage.” — Sarah, 25

What About Someone Who Doesn't Shave, Though?

“I personally stopped shaving last year, because I suddenly thought, 'Wait, WHY am I doing this?' I literally couldn't think of one reason, other than, 'Because it's what my mom does, and what my girlfriends do, and what Kate Middleton does, etc.' And that seemed stupid. Thinking about it, it's ridiculous that men can proudly parade their armpits and leg hair around, while women — who are naturally endowed with the same hair — feel ashamed and embarrassed. Although not shaving can specifically be about challenging these patriarchal ideals of what women should look like (which I completely agree with!), my reason for not shaving is much more simple: It's time-consuming, razors are expensive, and simply put, I am perfectly happy with the natural state of my body.” — Beth, 19

Moral of the story: Whatever you decide, do it for you.

More like this
Berriez Founder Emma Zack On Her Size Inclusive NYFW Show
By Dominique Norman
The Best Plus-Size Looks From New York Fashion Week
By Dominique Norman
Your No-B.S. Guide To Female Pattern Hair Loss Treatments
By Parizaad Khan Sethi
Lily Collins Got Shaggy Curtain Bangs For Emily In Paris Season 3
By Audrey Noble
Get Even More From Bustle — Sign Up For The Newsletter