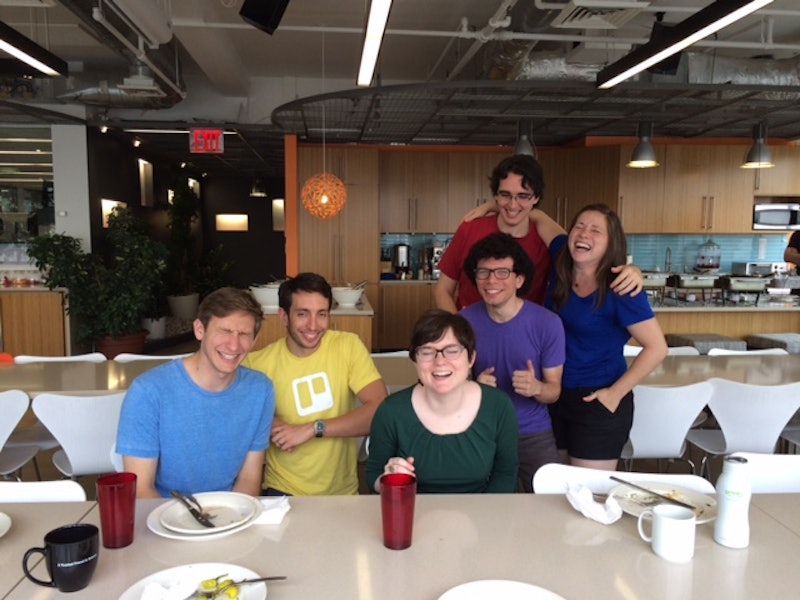 When I was eight, I begged my parents to get dial-up internet in our house. At nine, I subscribed to Yahoo! Internet Life magazine instead of Seventeen. Or, let’s be honest, in addition to Seventeen. When I was 13, I was running dual-boot Windows/Linux operating systems on the family computer and configuring our LAN (Local Area Network). At 15, I was playing my older brother's old MS-DOS games by running a Virtual Machine inside of the standard HP Windows desktop computer while wrapped in a binary-print blanket I bought from ThinkGeek. At 17, I was debugging network diagnostics in Japanese for my Tokyo "homestay" family's personal computer. And at 18, I took my first Computer Science class in college. And that's where my relationship with tech, as a field, ended.

Last summer, I attended the Flatiron School, which is a 3-month immersive web development program in New York. I was 27, and it had been nearly a decade after I "opted out" of a technical track. Like the Flatiron School's motto, I wanted to "make myself useful." According to my application from April 2014, "I want to be able to contribute to open source projects, have a fulfilling job, and provide substantial support for my current field — of moving image archiving and preservation." (Good news: I do all of these things now.) The school's target demographic is people that want to learn programming skills but have never before been a developer.

It had been nine years. So, what happened after those two Computer Science classes I took freshman year of college? Well, I went on to study design, film, and art history. Then I went on to study archives and information science. I worked as a book dealer, a development coordinator (the fund-raising kind of development), and a film cataloger. All of these jobs did not require tech skills, but they all benefited from my ability to use design programs, batch-process data, and write computer scripts.

It's important for me to emphasize that most girls don't have the resources I had access to when growing up. But despite all of these advantages and despite my interest in computing, I was still pushed out of studying computer science for all the same reasons you've heard about: receiving dismissive reactions to technical answers, being asked for a male voice to give authority, network administrators looking at my chest instead of my face, and the vast, empty sea of white male faces that reinforced the idea that this space was not a space for me.

Every time I put on eyeliner, I think about how I was told that girls "just weren't as good" at having developed strong hand-eye coordination, and that's why girls (me) aren't as good as boys (my brother) at video games. And who wants to do something they are told they are inherently bad at? So it goes, and so it went with my relationship to computer science. I bought a MacBook and I forgot about it.

I mention my childhood interests not to emphasize what a precocious teenager I was, but because those qualifiers are exactly the kind of markers that people think make someone naturally a good software engineer: That the best software engineers have been coding since they were nine and naturally move into the field because their talent. The only difference is that I was born a woman, not as a man. If someone like me didn't think a career in tech was a viable option at any point in her life up until one year ago, what about everyone else?

A few weeks before I graduated Flatiron, Michael Pryor and Joel Spolsky — the founders of Fog Creek Software, StackExchange, and Trello — were scheduled to speak to my Flatiron class. They announced a fellowship program for women in tech hosted by Fog Creek and its sister companies Stack Exchange and Trello. All graduating female Flatiron students would qualify, and could opt out of the program if they wished (the program has since been changed to an opt-in process).

After graduation, I attended. For me, the experience was a "fellowship" in the truest definition of the word: an opportunity to be “fellows,” to share a common space and share meals, with more senior software developers. It was an open desk at a very well-established software company (Trello), free catered lunch, and a mentor. In reality, it was like being adopted into a very big and very tech-savvy family. Basically, a great way to enter a field that for my entire life up until one year prior had seemed utterly out of reach.

Tech journalists love to talk about "the pipeline." If we just teach women how to code, everything will be great and our tech talent shortage will be over. But the opening of the pipeline doesn't matter if the entire pipe is constantly leaking.

Here's the thing: Women don't need to be better educated. Women aren't a problem that need to be solved. And this problem isn’t just about women. Women, and all traditionally disadvantaged people, just need to be treated with equal respect and given equal voice and opportunity to succeed in a creative, exciting, and flexible field that I am thrilled to be a part of.

Fog Creek's fellowship, and others like it, recognized that. "We wanted to do something that would give back to the community at large, help women in tech, and hopefully, through meaningful connections, create an ever-growing supportive network that could one day lead to an increase of women engineers on our own internal teams," says Liz Hall, VP of People at Trello and organizer of the program.

Like I said, it was like temporarily being adopted into a family. I was supposed to get one mentor, but I ended up with an entire support system, which is incredibly important for someone applying to junior developer roles for the first time.

All of the developer-mentors were eager to help explain all of the concepts they were taught during their traditional (primarily top-league university) Computer Science education and would talk us through popular algorithm-based job interview questions. (If you aren't familiar with The Technical Interview, it traditionally involves writing code on a whiteboard while people silently stare at you. I'm not kidding.)

They would explain concepts like how compilers work, cryptography, TCP, man-in-the-middle attacks, or NP-Completeness. Sometimes, we would just talk about time-travel, piazzas, or Taylor Swift. My first conversation I ever had with my mentor was about UTF-8 and mojibake.

All of the things 13-year-old me ever wanted to talk about.