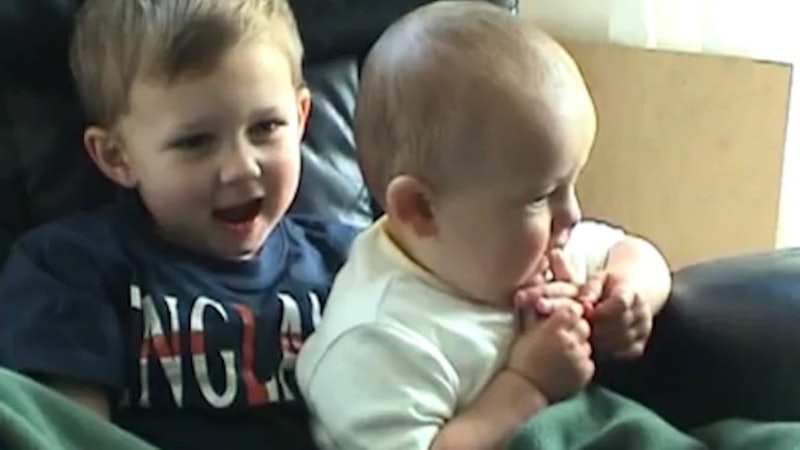 Remember, back in 2007, when the world was bright and the internet was young (well, younger), and we were all inexplicably obsessed with that video of adorable English siblings biting each other? Come on, you remember "Charlie Bit Me": The 55-second clip shows two young boys sitting on a chair together. One of them says those fateful words, and the rest is YouTube History. If you’ve ever wondered what the "Charlie Bit My Finger” kids look like now, then today is your best day.

“Charlie Bit My Finger” stars Charlie and Harry Davies-Carr, who were 1 and 3 years old when the video was shot. In the eight years since, the video has garnered over 816 million views, making it the most watched non-music YouTube video ever, and the eleventh most-watched video overall. (The most watched YouTube video ever is “Gangam Style” because of course.) In an interview with Ricky Boleto for CBBC, Charlie, now 9, explains that when his father posted the video online, he had no aspirations for viral stardom. The video file was simply too large to send over email so, Charlie recounts, “My dad put it on YouTube, so my godfather could watch it in America.”

Here is the original video:

And here are the boys eight years later (still biting, of course):

Charlie and Harry tell Boleto that they don’t mind their viral fame, although Charlie does say, “I think it’s a bit odd that loads of people have watched it.” The video has brought the family more than fame: The boys’ father, Howard Davies-Carr, says, “It brings a little bit of extra money in, so we’re more comfortable.” In 2012, ABC News estimated that “Charlie Bit Me” had earned the family close to $500 thousand, through licensing deals and advertising through YouTube. Not bad for a random home movie, right?

More like this
Here’s How To Find Your Apple Music Replay For 2022
By Melanie Mignucci
20 Christmas Movie Quotes That'll Get You In The Holiday Spirit
By Alexis Morillo
Here’s How To Find Your Spotify Wrapped
By Emma Lord and Emma Carey
What Does “The Rizz” Mean On TikTok? The Viral Slang Term, Explained
By Alexis Morillo
Get Even More From Bustle — Sign Up For The Newsletter