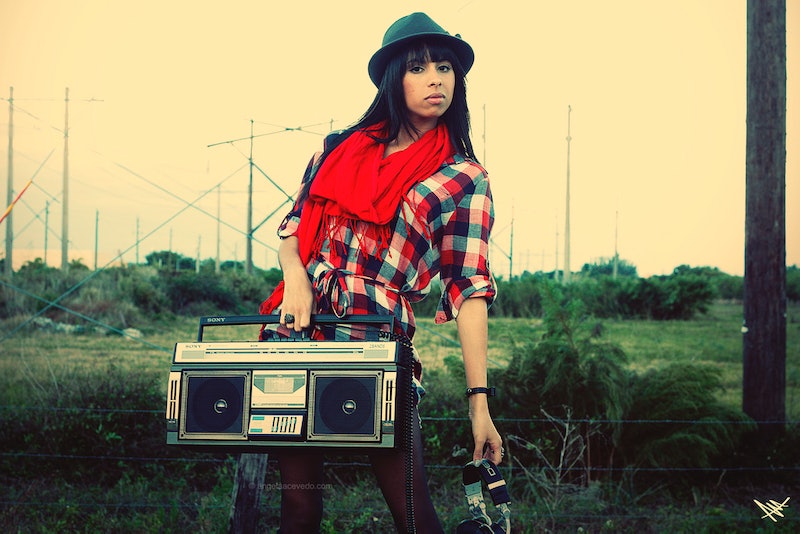 I once went out with a guy who, when I asked him what his favorite band was, stammered before replying, “Ummm… I mostly just listen to Pandora.” Enter the sound of screeching tires. Not literally of course. Just in my head. To a music lover, saying you're not that into music (or just as bad, that you listen to "everything") is like saying you have no soul. No passion. That you are dead inside. What do you listen to when trying to get through a breakup? Get jazzed up for a night out? When you really want to strangle your significant other? How do you get through life? OK fine you might not be dead inside, but it does leave a music lover wondering what's up. There are so many benefits of listening to music, and it’s not us music lovers expect you to have the same taste (well some of us maybe, but not all of us). You just need to have some taste. Any taste. Even a deep passion for country music would be preferable to not having a preference at all.

The guy ended up having no passion for anything except his new flat screen TV. You can imagine how that translated in many other ways as well. If you're interested in someone who loves music like vampires like blood, there are some things you ought to know.

1. We WILL judge your taste in music

Either you will find this totally superficial or it will make complete sense to you, like when God spoke to Moses and he was like I totes get it. Because as we music lovers have always known, you can tell a lot about a person by their musical tastes. So if your tastes reside solely in the Top 40 category or that one band your cousin told you about or even worse whatever comes on your Pandora, you may incur some eye rolls.

2. We will move mountains to see a show

Maybe it's a band who reminds them of high school, eating slices (aka pizza), and summers by the lake. Or maybe it's just a new crush that tickles their fancy and gets them excited to wake up in the morning and sing in the shower. Regardless, it's a band that makes them feel something. Music lovers live for live shows and the feeling of joy it gives them, (proof: I once flew to L.A. From NYC to see AC / DC). It's kind of like ecstasy but minus the sh*tty after effects and excessive hugging.

3. You will always be surrounded by music

As in morning til evening. Silence is excruciating. It sounds like an awkward space that need to be filled. That means you'll be listening to music while driving, cleaning, showering, cooking, peeing, and for some music aficionados even while you're sleeping. Think of the music as lullabies for grown ups.

4. Their mind will carry encyclopedia-like knowledge about music

Sure they may have failed algebra, but a true music lover will ingest facts about music with the same zeal as babies ingesting boobie milk. For example did you know Led Zeppelin named their song "Black Dog" after a Labrador who wandered around their studio grounds. #NowYouKnow

5. They will use songs to express themselves

It's actually quite romanticals. I’ve had everything from “You’ve Made Me So Very Happy” by Blood Sweat and Tears to “Stellar” by Incubus played as expression of love. And though I prefer to sing my own dittys, I’ve been known to play a song or two including “Fool in the Rain” by Led Zeppelin and my new (old) favorite I love you song, “Mint Car” by The Cure.