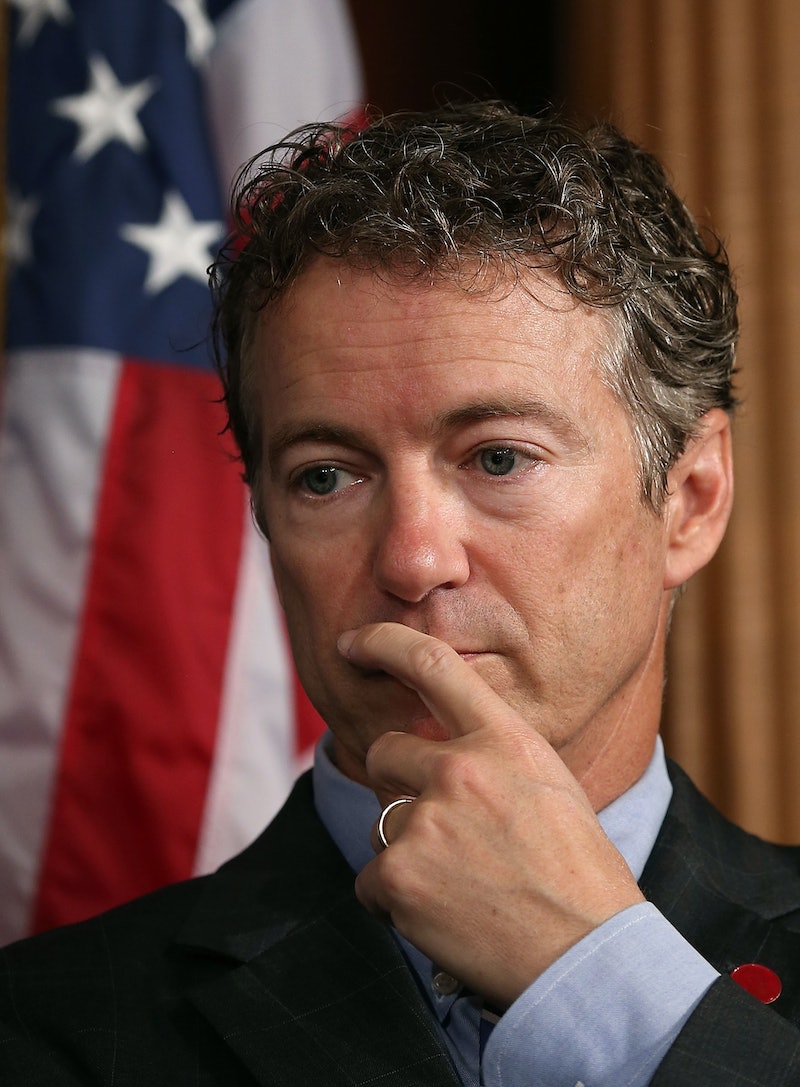 In a speech Monday, Senator Rand Paul attempted to show off his 90s movie savvy, drawing an extended comparison between liberal health care policy and “Gattaca,” the criminally-underrated 1996 eugenics thriller with Ethan Hawke and Uma Thurman. Paul’s speech ran into a number of problems: First, it was a ridiculous comparison, because nobody within miles of elected office, in either party, even remotely supports eugenics. Second, he ruined the ending of the movie. Thirdly and most amusingly, as Rachel Maddow pointed out on MSNBC Monday night, Paul apparently plagiarized his summary of the film from Wikipedia.

Paul made the comparison at a rally for doomed Virginian gubernatorial candidate Ken Cuccinelli yesterday. He described the plot of the film, which involves genetic discrimination and a young man’s lawless attempts to overcome it, and lamented that if Democrats have their way, the country “will eliminate people with cerebral palsy” and do all sorts of other evil eugenic things that generally fell out of favor after the collapse of the Third Reich.

So, that happened... and to boot, the words Paul used were almost exactly the same as those from the Wikipedia page for the film. For example:

And so on. BuzzFeed’s Andrew Kaczynski confirmed that the Wikipedia entry hadn’t been changed since Paul’s speech, meaning the only possible way Paul might not have plagiarized it is if he wrote the entry himself, which is certainly a charming thing to imagine.

Granted, stealing words from Wikipedia is a lot more innocuous than, say, stealing words from a sitting president of the opposite party. What’s perhaps most concerning is that Paul’s word-for-word recitation of the online encyclopedia entry suggests that he may not have even seen the film which, in addition to making the reference seem kind of cheap, would represent a serious deficit in Paul’s filmgoing repertoire.

Wikipedia has yet to respond to a request for comment.

More like this
Jodie Turner-Smith & Joshua Jackson's Relationship Timeline Includes Her Proposing
By Jake Viswanath
J.Lo Wants To Make A Sequel To This Movie With Ben Affleck
By Jake Viswanath
Hugh Jackman Shared The Sweetest Tribute To His “Extraordinary” Wife
By El Hunt
'Bridgerton' & 'Succession' Casts Join Forces For A New Dickens Adaptation
By Darshita Goyal
Get Even More From Bustle — Sign Up For The Newsletter