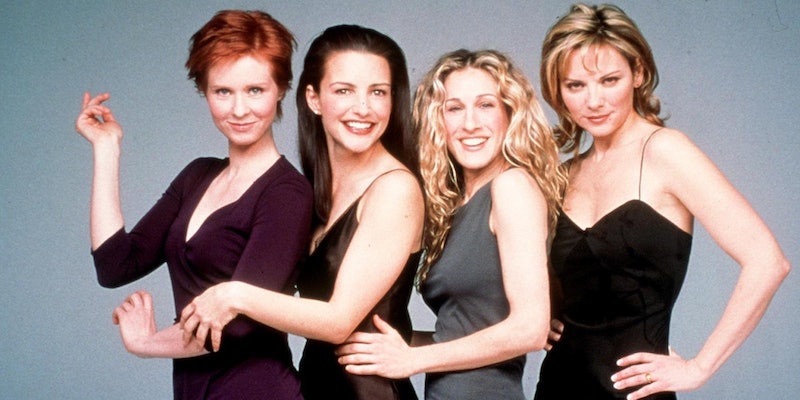 Sex and the City premiered on HBO on June 6, 1998. At the time, the only women over the age of 30 you saw regularly on television talking about their sex lives were most likely The Golden Girls or Roseanne. Now with the dawn of Girls, Broad City, Inside Amy Schumer, and Orange is the New Black, female sexuality and the complexity of female relationships are taking up more and more real estate on the airwaves. But the era of Sex and the City was as polarizing as it was revolutionary — you either loved it or hated it, and that still seems to be the case 17 years later. Despite all of Sex and the City's flaws, I will forever be a fan of the show. Sure, all of the Manolos and cosmos make the characters seem a little shallow and Carrie could be downright horrid, but I will always love how the show was a love story about four friends.

The pilot for Sex and the City is a trip down love/hate memory lane — it is full of all of the things that made the show great and terrible all at once. There as manyt annoyingly outdated ideas about women's roles in relationships as there are powerful statements about women taking control in all aspects of their lives. It's as baffling as it is refreshing to see just how much stronger the show became over its run and especially how much further we've come since 1998.

Here's what we forgot about the Sex and the City pilot, in all of its late 90's glory:

The Twin Towers Were Prominent In The Opening Credits

The World Trade Center was later removed from the title and from behind Sarah Jessica Parker's name — they were replaced with a post 9-11 New York City skyline and the Empire State Building respectively following the events of September 11, 2001.

Carrie Was A Cynic

Carrie at the end of Season 6 with the Russian was a far cry from single Carrie in the pilot. Her thoughts on love were far less idealistic and much more cynical (or realistic, depending on how you feel about the L-word). For example in the opening to the pilot she remarks, "Self protection and closing the deal are paramount," in terms of dating. She also concludes that in New York, "No one has Breakfast at Tiffany’s or Affairs to Remember."

Miranda Was The One You Would Most Identify With Today

Back in the day the, "Are you a Carrie or a Samantha?" question was a regular part of conversation and almost no one wanted to be a Miranda — because I guess she was once perceived as grating or un-sexy. But after re-watching the pilot I thought to myself, "Miranda all the way." Her thoughts on dating were acutely close to my own, "By the time you reach your mid 30s you think ‘why should I settle?’" And she tells Skipper to keep his hands where she can see them on their first meeting at a bar. I don't care how "nice" some guy is, I wouldn't want to let a pratical stranger touch my knee either. That doesn't make her a bitch, it makes her a GROWN WOMAN.

There Was No Real Nudity

For all of the talking they did about sex on the pilot, you don't actually see much. There was just a shadow of a boob in the pilot.

The series opens with the tale of Carrie's journalist friend from England who falls in love at first sight with a "well-liked investment banker"and then gets dumped weeks later. She never shows up again.

Skipper Was One of Carrie's Close Friends

The pilot positions Skipper as one of Carrie's closest friends. Maybe the writers were trying to see if she could gave a gay BFF and a straight BFF to prove women really CAN have it all! Ugh.

Dating In NYC Has Changed Immensely

The phrase, "They met in typical New York fashion...at a gallery opening," was used and I wondered if that was ever actually real or of online dating has made me believe real-life meet-cutes don't exist.

The Cast Talked To The Camera

It wasn't good for anyone.

It is just downright insulting. "Single" is better. Or even you know, "Human Person."

Charlotte Was A Feminist's Nightmare

She actually uttered the phrase, "If you want to get these guys you have to keep your mouth shut and play by the rules."

The Idea Of "Sex Like A man" Was Introduced by Samantha

Apparently that means having sex without emotions or commitment. The whole thing kind of makes me sad now.

Huge Collars Were A Thing

Worn by Miranda as well as Carrie's loathe of her life Kurt.

You Could Smoke Indoors At Bars And Restaurants

Big Is Insulting And Controlling Carrie From The Start

In the pilot he tells her, “but you’re not like that” when Carrie is talking about her article on women who have sex like men...because he knew her for all of 10 minutes so he's obviously an expert on who she is. Worst of all when Carrie says that in her career she's like a "Sexual anthropologist," he asks, "Like a hooker?" She could have saved herself a lot of time by just getting out of his car right then and there.

Samantha Tries To Hit On Mr. Big At Club Chaos While Carrie Watches

She also referred to him as a, "Young Donald Trump."

And that's all he was ever good for!