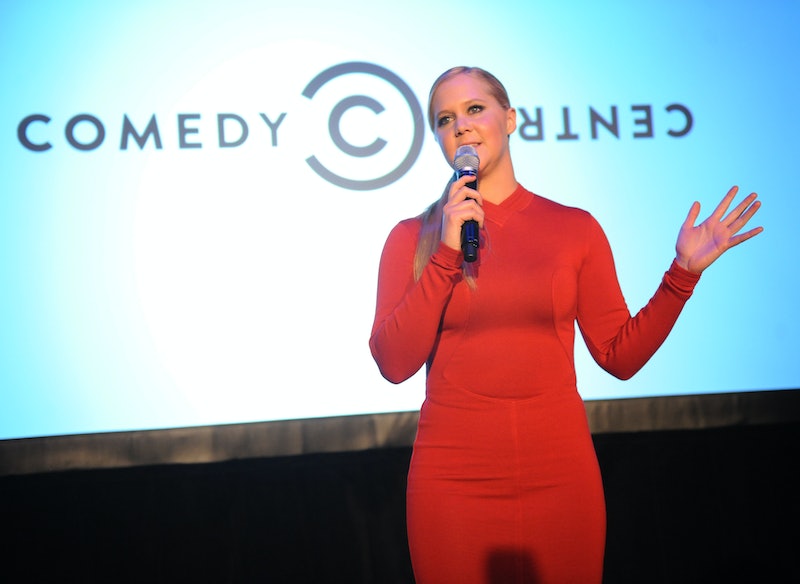 Comedy Central's Inside Amy Schumer returned this week for a third season. The first two seasons were heavily lauded for subtly and powerfully taking on a number of feminist issues while also managing to remain incredibly funny. Just one episode in, Schumer is already receiving heaps of praise for her take on rape culture, and the age bias against women in Hollywood. However, Schumer's interview with Bailey Jay, a transgender adult film actress, has resulted in some accusing her of being tone-deaf on trans issues. Interestingly, that criticism doesn't appear to be being leveled by the trans community. The interview, while perhaps a little more vulgar than some people may have liked, is actually a rather positive and humanizing moment for trans women.

Without a doubt, the interview is quite blunt and without much subtlety, but that's absolutely in-character for Schumer in her show, and it doesn't appear to phase Jay, who simply smiles and giggles through the whole interview. Schumer opens by boldly asking Jay "So, you have a cock?". The comment has drawn comparison to Katie Couric's invasive questions about the surgical status of Laverne Cox and Carmen Carrera. But the situations simply aren't that analogous. Cox and Carrera were appearing on a daytime talk show to discuss the very serious struggles of the lives of trans women; Jay was doing a two-minute interview on a comedy show that's takes place in a fictitious restaurant called "O'Nutters." Jay is a smart, savvy woman and almost certainly knew exactly the kinds of questions she'd be getting from Schumer when she agreed to the interview. The argument made by some is that by asking such a question, Schumer is somehow legitimizing asking those questions to any random trans person you'd happen to meet. Maybe instead we should be asking why people who would take clues about acceptable social behavior from a sketch comedy show.

The remainder of the interview included a number of very insightful, humanizing moments that touch on some very critical and common experiences of trans women. When asked to answer the most common questions she gets, Jay replies "I sit to pee, and I don't use the men's bathroom," echoing the near constant fascination that the larger cisgender world seems to have about how trans women relieve their bladders. When Schumer asks about her husband's sexual orientation, Jay is quick to correct her that her husbands still identifies as straight, poking holes in the constant assertions that men who date trans women must secretly be gay. When asked the inevitable questions about her genitals, Jay's open discussion of her penis is a surprisingly endearing and powerful reminder that not all trans women undergo or seek genital surgery. When asked about the most common misconceptions about her, Jay's first response is that we're "not out to trick men," a trope that remains one of the most pervasive and dangerous stereotypes about transgender women. Even with the dick jokes and masturbation humor, there's a lot to love and a lot of really important information shared in this interview, and it seems foolish to write it off for the sake of respectability.

Jay, for her part, responded to the critics in a blog post, saying:

"I think the more trans visibility there is in mainstream media; the more room we will allow for individuality. Like if the trans community were the Spice Girls I’d just be the funny, raunchy one instead of me having to lie about my personal boundaries in order to better represent a community that does its best to operate as a whole while we get our footing in the world. But it’s still early now, and some trans people are understandably scared that the flippant sex worker is going to screw up the rebranding process. We’ve watched some feminists call porn stars sluts and whores for years because of fear that they’d undo social progress for women. I understand the fear, I just don’t necessarily agree with it. So Amy got blamed first for not being well versed on the academic trans social political rule book before interviewing me and then I started getting blamed for not vetting the questions beforehand and basically for not being offended by the questions."

The fact of the matter is that trans issues remain quite a novelty for the vast majority of people in the United States, and our identities are only just now squeezing into the wider public consciousness. Many of us working in activist circles regularly invite far more invasive questions from the public than is generally socially acceptable in the name of awareness, spreading information, and saving other trans women from having to endure those questions in more private contexts. Answering questions like that has no tacit implication that the questions are somehow acceptable for social conversation, and it's just as absurd to shame Jay for openly discussing her body and experiences as it would be to shame activists for having similar conversations on panels. If anything, Jay's interview is probably going to prevent far more invasive questions than it will cause, simply because she's provided something that people seem to crave constantly about trans people: information. Instead of tearing up the interview as a mis-step on trans issues, we should celebrate it as a chance for a trans woman to be open about herself, her body, and her experiences.