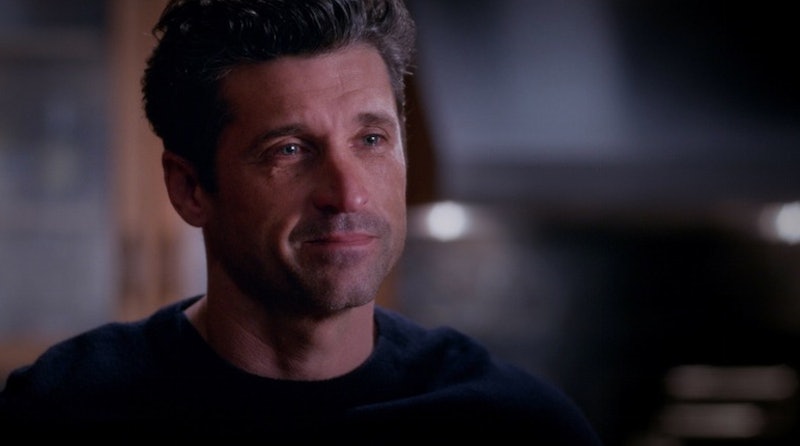 Well, Grey’s Anatomy fans, if you thought all was well in the land of Meredith and Derek, Shonda Rhimes is throwing you for a loop. In last week’s episode, Derek went back to Washington, D.C. to quit the job that had been a big source of conflict in his marriage, except he didn’t show up for the meeting he had scheduled. Is Derek Shepherd dead? Well, I sure hope so.

Before I get flamed, I just want to say that I am a total Grey’s Anatomy fan. I’ve watched Meredith and Derek’s drama from day one — I wanted him to pick her, choose her, love her — and I am totally on the good ‘ship MerDer. However, their relationship has been pretty rough as of late. He takes a job across the country for the freaking President of the United States, she hates him for it, and then she hates him for coming back, and he’s got this martyr thing going on, and then he sacrifices his job for the good of his family. For a couple that has been through a super storm, a plane crash, a near-drowning, a shooting, a bomb in a body cavity, Alzheimer’s disease, a bus accident, a ferry disaster, and the return of a rouge-haired ex-wife, is Derek’s job the thing that’s going to ram this relationship into the ground? That’s crazy ridiculous, and it must be stopped. Either let them be happy or let them be gone.

For this reason, I think Derek’s character should be killed off the show. According to Entertainment Weekly, both Patrick Dempsey and Ellen Pompeo have signed on for two more years of Grey's Anatomy, taking them through Season 12. But so what? Actors leave television shows all the time — just look at Sandra Oh. If Derek dies, it will stop the hamster wheel that is Derek and Meredith’s relationship and make for some very watchable, very intense acting moments for Pompeo. Derek’s death would throw the entire premise of the show off-kilter, which could be great. Meredith will be forced to reassess her life in a way she never has before, and I would absolutely love to see what Rhimes would write for that.

Now that I’ve laid out my reasons to off Derek Shepherd, what happens if he lives through the next few episodes? Where does the show go from there? Let’s say that Derek makes it through the rest of the season alive. How can Rhimes and company take that nugget of casting and make Grey’s Anatomy more interesting to watch?

Make it not so much about Meredith and Derek. Their relationship has been the gravity of the whole show — they are literally the first two people you see in the series — but let’s bring the focus away. I’d love to have a Maggie-centric episode. I want to know more about her and her life before she got to Seattle Grace. Karev’s maturation from “jerk that called Meredith a nurse” to “Meredith’s person” has been an amazing transformation for Justin Chambers. Give Karev the spotlight for an episode or two. Bring Debbie Allen’s legendary aura back to the show and let’s see if Chief and Catherine Avery can really make things work.

The fantastic thing about Grey’s Anatomy when it first started was that all of the characters were so rich and vibrant. Everyone had a backstory, and viewers were eating it up. Switching lanes to bring other characters to the forefront would be reminiscent of the show’s first seasons, and it’s sure to make those who fell off the Grey’s Anatomy train get back on again.