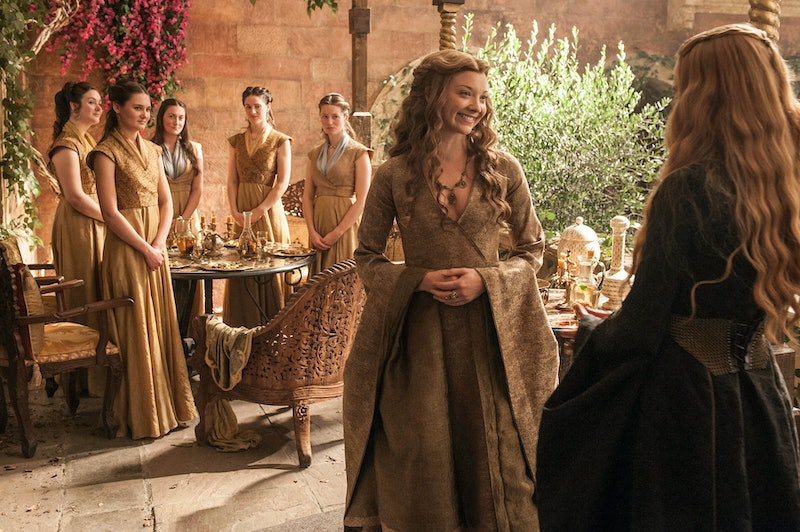 There's a ton happening in King's Landing right now. Even though we're now into a completely new season, King's Landing is still dealing with the fallout from Tywin's death, plus the continuing aftermath Joffrey's death at the Purple Wedding. Now, Joffrey's ex-wife is set to marry his brother, Tommen, and while there are a lot of people who aren't happy about this union, one person stands out the most: Cersei. Game of Thrones' Season 5 opener, "The Wars to Come" showed us the most shade we've ever seen Cersei throw at Margaery in the history of medieval gowns with sexy cutouts. That might not be all that she throws her way, though — could Cersei kill Margaery?

Taking into account the history that these two women have with one another, it's highly likely. Thinking about everything these two women have schemed over, it's still a very likely chance. Cersei downright hates Margaery for a variety of reasons, two of the most important ones having to do with the fact that she's married now two of her sons, and that many consider Margaery to be prettier than her. These are things that don't sit well with Cersei.

Then again, on the other hand, it's not like Margaery is singing Cersei's praise. Margaery even mentions to her brother, Loras, that she doesn't want to be under Cersei's control, and if she had her way, Cersei would be the next one to go. These women completely hate each other, yet are strikingly similar in so many ways. Mainly, the "death to the other!" way.

So, will one of them go the way of Joffrey/Ned/Robb/everyone else by the end of this season?

Now here's a big Game of Thrones SPOILER ALERT, because it's time to dive into the books. This storyline will more than likely be dealt with over the course of Game of Thrones Season 5, so proceed at your own risk.

In the books, of course Cersei actually tries to kill Margaery. It's like not killing her is a thought that never crosses Cersei's mind. She goes about it in quite a roundabout way, though. Not like she poisons her, or strangles her in the middle of the night. Instead, Cersei accuses Margaery of adultery in hopes of having her arrested, and eventually killed. She orchestrates this by having Osney Kettleblack (who Cersei has just seduced. Also, we won't see him in Game of Thrones Season 5) confess to the High Septon that he slept with Margery.

In true Cersei fashion, she puts on a whole show acting very concerned for Margaery's accusations, and then tries as hard as she can to make sure that Margaery is found guilty. Her plan almost works. But then, it all falls apart on her and instead Cersei is arrested for an assortment of crimes (like, the fact that she had a prior High Septon murdered).

So while Cersei doesn't outright try to kill Margaery, she does a darn good job of trying to make it happen — or at least having her, and her Tyrell influence taken out of King's Landing.

Nothing says this is what will happen on the show, though. Game of Thrones is playing with a lot of different storylines this year, and instead of showing Cersei trying to falsely imprison Margery, they could have her try to kill her instead. Without Osney on the show, they're going to have to tackle this entire plot a different way. Will Cersei accuse Margaery of sleeping with someone else? Are the writers just going to take a different path with this? The High Septon is being introduced, so we know that storyline will carry over. As for the beef between these two women, though, that's still anyone's guess.

Personally, I'd really love to see these two throw down. It would make for some pretty great girl-vs-girl espionage, and I kinda want to see Natalie Dormer kick someone's butt, you know?