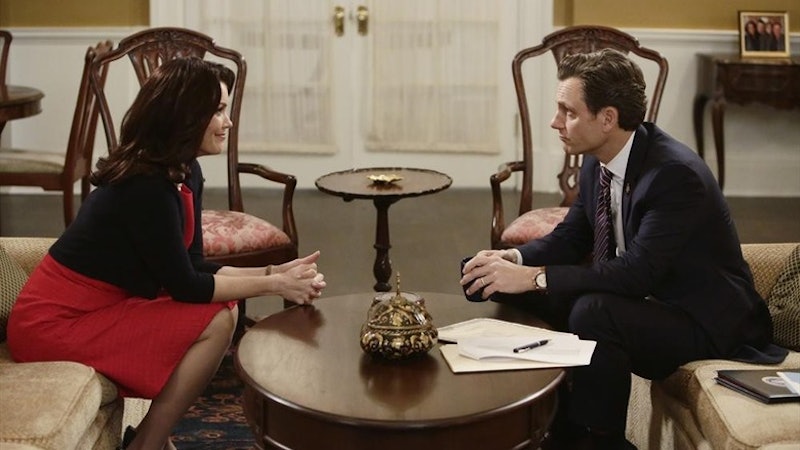 It's official: Mellie Grant on Scandal is running for president–I mean for senator of Virginia on. And it's already turning out to be exactly as awesome as we've all imagined it would be, including giving us all a showdown between Cyrus and Sally over misogyny and equal rights for women that was briliant.

Because we live in a sexist country, almost as soon as Mellie Grant announced that she was going to take some time off from being first lady to run for elected office, people began asking whether or not it was appropriate for a first lady to dare do such a thing — and whether or not she should be allowed to do so while literally in bed with the executive branch. As David Rosen helpfully explains, it isn't technically illegal, but only because misogyny prevented anyone from anticipating that such a situation would occur.

But because this is Scandal, a show with some serious feminist chops, we got to see Cyrus totally dismantle the arguments against it on national TV with Sally Langston. Sally, the living embodiment of Fox News even before she took a job as a talking head there, doesn't think that Mellie should be running. But Cyrus takes he points down one by one.

Sally tries to say that Mellie is forsaking her oath — Cyrus points out she didn't take any; first lady is not a job that requires an oath. Sally says she's forsaking her duty as a wife — Cyrus rightly calls her out for being sexist, saying that women shouldn't have jobs of our own.

Sally says that Mellie Grant should just be a mother, because that's the "hardest job of all." Cyrus, in one of the most interesting takes on that age old debate, changes the conversation by pointing out that being a mother isn't a job, it's who you are. You can quit jobs, or get fired, or find others. You never stop being a mother.

Plus, jobs are paid.

Besides, he adds, if Sally had been elected president, would anyone have tried to tell her husband, Daniel Douglas, that he didn't deserve to find something more to occupy his time than tending to the White House gardens? Of course not. So why is everyone upset about it when it comes to the first lady? Repeat after me: sexism.

We like to pretend that sexism and misogyny are things of the past, which really only allows those problems to flourish due to lack of attention. So getting to see a prime time drama not only show the issue again and again and again, but now actually have a character dismantle that on the show's own version of national TV is awesome to see.