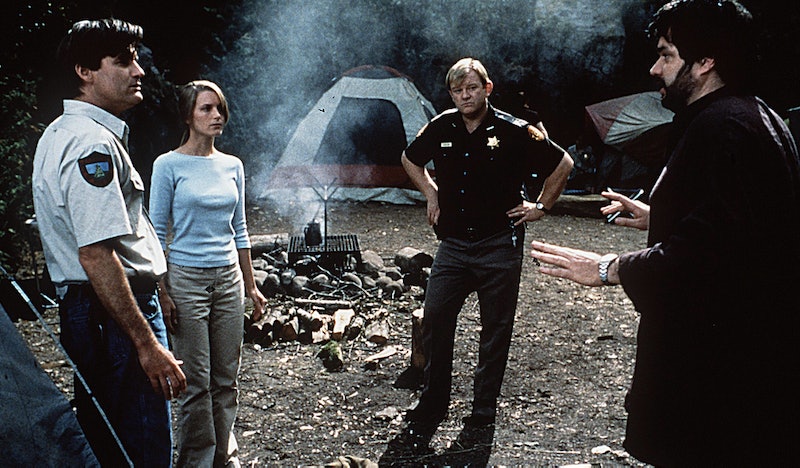 Sometime during Ally McBeal but before Boston Legal, exec producer and writer David E. Kelley wrote and produced a horror comedy feature film called Lake Placid, released in 1999. Yup, you read that right — a horror comedy, and no one's a lawyer. More than 15 years later, the film has spawned three SyFy sequel TV movies and earned one big campy crossover — Lake Placid Vs. Anaconda , premiering on Saturday night on SyFy. But before you watch worlds collide, get caught up on the strange world of Lake Placid.

The plot is simple: A giant crocodile with an appetite for humans terrorizes a town in Maine and hard-to-define-hilarity ensues. Entertainment Weekly called the very first Lake Placid a "quirky tale" that almost didn't make it to the big screen back in the 1990s, but stars Bill Pullman, Oliver Platt, and Bridget Fonda told the magazine they believed in Kelley's scripted and loved it. "Thanks to his writing, you have these phenomenal characters and this wild kind of humor that’s very hard to describe," Fonda said. "That strange mix is my favorite kind of movie to be in."

Strange and awesome. Before you pop your popcorn and get ready for Lake Placid Vs. Anaconda, let's go on the epic and wild journey of Lake Placid itself — there are crocs, cows, helicopters, and Betty White being sassy.

There's Something In the Water

The movie opens with a diver getting attacked by an unseen threat in the lake. And by "attacked," I mean the bottom half of his body was bitten off — someone pulls him back on the boat and it ain't pretty. You know who this is a job for — no, not the police. Former Independence Day president Bill Pullman, going by the name Jack Wells and now working as a Fish and Game officer. He's on the case! In tiny motorboat!

Meanwhile at a museum in New York, a paleontologist named Kelly (Fonda) — who is uptight and a total nerd and pretty much the female version of Ross Geller from Friends — gets sent to Maine to investigate a croc tooth. Jack mocks her for being a museum nerd, but eventually, the sheriff and Jack let her on their little investigation boat. They go to Betty White's house on the lake, where she confesses to killing her own husband. With a skillet. Um, off-topic much? (Not quite. Keep reading.)

Rich mythology professor/croc lover Hector (Platt) arrives via helicopter with a desire to swim with a croc, because Sea World just isn't enough for him anymore. Kelly, Jack, Hector, and Jack go out on tiny rowboats, where the sheriff wonders how a croc could be in Maine and survive winter. The croc flips over one tiny boat to distract us from thinking too hard about that one.

Then everyone stares down at a human toe. Just a toe, being eaten by worms. Gross.

Hector has a dance party to attract crocs and Kelly has a super emotional feelings talk with Jack (cue the soft music), where she admits she doesn't want to return to the museum because her boss ex-boyfriend dumped and cheated on her with her friend. Then, there's some more mischief and drama — Hector making traps, Jack and Hector going on a dive, the crocodile taking control of a tiny boat, and decapitating a dude.

This prompts another Jack and Kelly ~emotional moment~, where she's rendered speechless by the image of the headless body.

Hector and the sheriff argue as usual, but then IN THE MOST AWESOME SHOT OF THE ENTIRE MOVIE, a bear runs out of the bushes to attack Hector — and the croc comes out of the water and bites him. Just take in how awesome that GIF above is.

It causes Jack and Kelly to talk about their feelings some more. After that, they find a giant croc footprint in the mud, a head in the bushes (just the head), and Betty White feeding her cows to the crocodile. They're friends. One day, the crocodile just followed her hubby home and she kept feeding him. The croc ate her husband. Whoa! She's on the croc's side.

Now armed with this knowledge, naturally Hector wants to go swim in the crocodile's home and the croc doesn't like it one bit, attacking both Hector and the helicopter. Jack yells at him and then Hector declares, "I'm a human, not a trout. You have no authority over me whatsoever." You tell 'em.

Despite being almost eaten, Hector doesn't want to kill the croc and insists he can be contained with drugs. Jack isn't a fan of this, but goes along with it. The gang uses one of Betty White's cows as a lure dangling from a helicopter, prompting Betty White to call them very vulgar names. "I'm rooting for the crocodile," she says. "I hope she swallows your friends whole."

So the helicopter just flies around with the cow in the air, dips him in water for a little bit — look, I know they're doing this to be humane to the croc, but is anyone thinking about the cow? Because then day turns to night and that poor cow has been dangling for too long. To make matters worse for the cow, the crocodile finally shows up as Jack tranquilizes the croc, Hector loses control of the helicopter, and lands in the water, dropping the cow. So did the drugs work? Is the croc contained? Nope! The crocodile roars and scares Hector into the water.

NOPE! Another croc comes out of the water, bites Hector, and the sheriff blows up that croc.

Betty White feeds baby crocodiles in the lake to give us Lake Placid 2, Lake Placid 3, Lake Placid: The Final Chapter, and Lake Placid Vs. Anaconda. She's rooting for the crocs, after all.