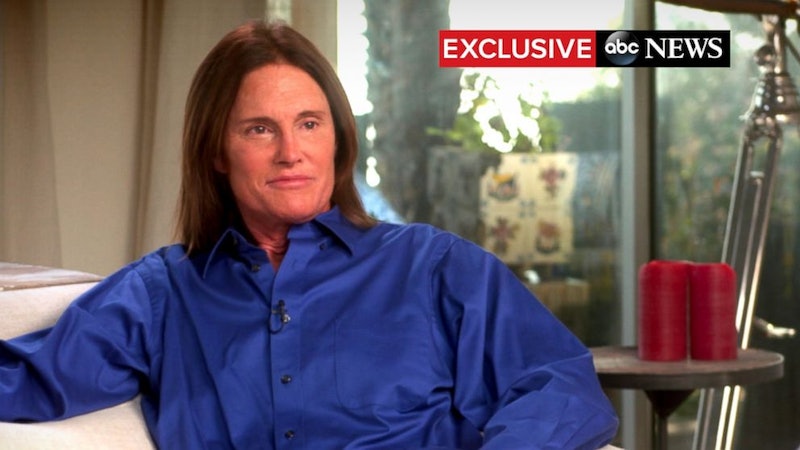 For months, media outlets have speculated about Bruce Jenner's life post-divorce from Kris Jenner, namely that Jenner was preparing to come out as transgender. When Jenner set a date for a two-hour interview with Diane Sawyer, the chatter grew louder, though Sawyer herself has been insistent that only Jenner should be the one to reveal the point of the special interview, telling George Stephanopoulos on Good Morning America, "Some stories should only be told by the person who lives them." And now, the Keeping Up With The Kardashians star has done just that: Jenner has officially said "I am a woman," and thanks to the interview, the former Olympian was able to tell the story in a personal and inspirational way.

"Yes, for all intents and purposes I am a woman," said Jenner during the interview, after explaining coming to the decision to come out publicly.

When explaining the method in which Jenner told the Kardashian and Jenner children, Jenner said this: "Let's give him the soul of a female, and let's see how he deals with that. Here I am stuck. And I hate the word 'girl stuck in a guy's body.' I hate that terminology. I'm me. I'm a person. This is who I am. I'm not stuck in anybody's body. It is who I am. My brain is much more female than it is male. It's hard for people to understand that. But that's what my soul is. I look at it this way. Bruce: always telling a lie. He's lived a lie his whole life about who he is. I can't do that any longer."

While the reports have bombarded Kardashian fans for what seems like eons, none of those reports allowed Jenner to be the one telling the story. Every soundbite was a bit or piece of Jenner's experience filtered through someone else's understanding of Jenner's life and decisions. And to put it bluntly, that's not how this story should go. It's incredibly important, and incredibly powerful, to get the story from Jenner: While we, as a society, have made great strides in understanding transgender issues, we have to remember that at the center of all of this are people simply living their lives. Jenner's interview allows Americans to better understand this and hopefully to stop speculating about someone's life and gender without their consent.

In the previews for the two-hour interview, we can see that coming out as transgender has not been easy for Jenner. The pull quote that is sent around most frequently is Jenner's blanket statement: "2015 is going to be quite the ride." And it certainly is: By coming out in such a bold, yet personal way, Jenner has opened the conversation about what it means to be transgender in a way that we've not yet seen.

While Jenner certainly can't speak for all transgender men and women, hopefully Jenner's interview can bring some better understanding to fans and viewers.

Editor's Note: Per Jenner's stated preference, Bustle will continue referring to Jenner using he/his pronouns for the time being. We will follow his lead and make any changes to this policy as needed in the future.