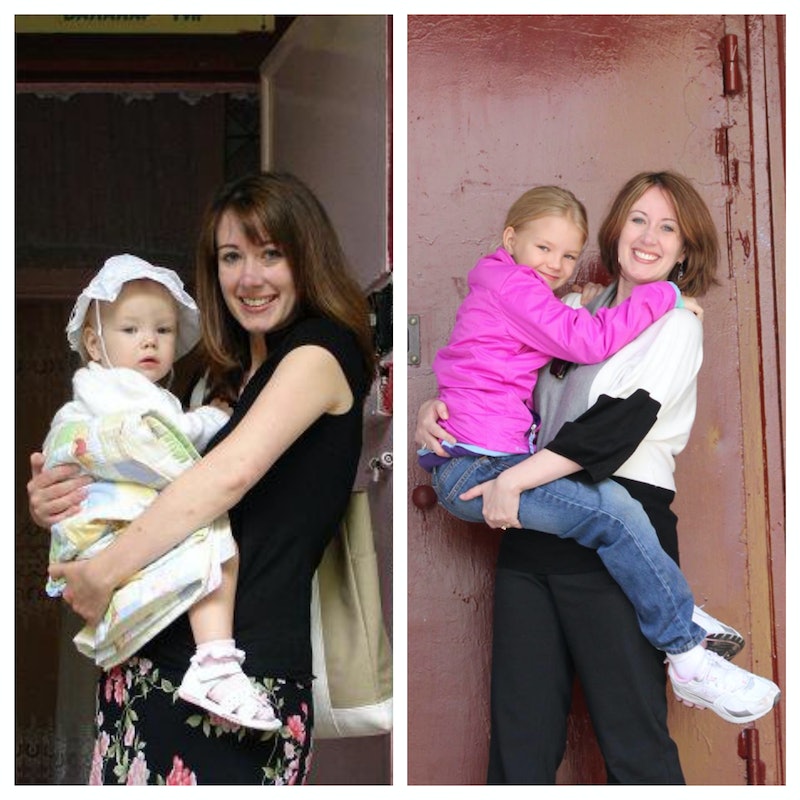 My decision to adopt was completely selfish. My grandfather was diagnosed with terminal cancer in Oct. 2005, and I knew the following year would be unbearable if the only thing that was different was my grandfather’s absence. I reasoned that there was nothing more joyful (and distracting) than a baby, so I decided that I would either get pregnant that month or adopt.

I was open to adoption largely due to the fact that I’m so close to one of my cousins who is adopted. I didn’t have a preference, other than the fact that pregnancy would have been easier (or so I thought) and cheaper. But, when that didn’t happen, I didn’t bat an eyelash at downloading an adoption application and filling out the paperwork.

When I first announced I was adopting internationally, I would have liked to hear “Congratulations!” Instead, I got: “What?! You can’t have your own?”; “Ack! What does your mother think?”; “What if the baby has fetal alcohol syndrome?”; “What if the baby has AIDS?”; and “Yes — I know they have doctors — but be careful, because they’ll lie to you over there.”

I put the comments out of my mind, as much as I could. We adopted Arina, my first child, from Kazakhstan in 2006, when she was a toddler.

As I fell, inexplicably, more and more in love with my daughter than the day I first met her, I found myself thinking more and more about the people who belonged to her — and so did my husband. “She’s just so funny,” he would say. And yes: she's always had a natural, engaging humor that captivates a crowd. Scott speculated that someone in her biological line (maybe a parent or a grandparent?) was the reason. We began to wish for an open (rather than closed) adoption, one in which the birth and adoptive families are able to contact one another.

That wish became more defined when the second round of inappropriate comments began. Most of them took some form of “So sad. How could her mother give her up?” I talked about poverty and desperation, and said that we can’t know what we would do under those circumstances.

Scott and I had thought that arriving home with our lovely, healthy, and hilarious daughter would dispel adoption myths and phobia of “over there” in one fell swoop. But I was still fighting to dispel myths; the target had only switched from my daughter to her birth mother.

After four years of wondering, I decided to find Oksana myself, and hired an investigator. Find her I did, though not in the way I’d hoped.

The problem when defending my daughter's birth mother was this: I was only speculating about this woman named Oksana, the maternal name on Arina's birth certificate. Still, as an only child, I began to think of Oksana as a sort of sister. I dreamed of exchanging letters and phone calls with her, of finding someone as invested in Arina as I am; being able to get advice, even occasional commiseration. After four years of wondering, I decided to find Oksana myself, and hired an investigator.

Find her I did, though not in the way I’d hoped. I never imagined that she would have passed away (likely, a victim of domestic violence), and I cried like a baby when I read the following email:

I made my way up to Arina’s room, because I felt that the information was hers to know. I crawled into her bed and woke her up to tell her.

“We’ve found your grandmother and your aunt and your sister,” I said, starting with the good news. I followed up with the bad, telling her that her birth mother had passed away. Arina yawned, said “Oh no! That’s so sad!” and then announced that she was “very happy” to have another Nana, aunt, and (most of all) a sister before falling asleep again. Just like that.

I don’t know what I expected from a six-year-old, but I kissed her cheek, whispered that I loved her, and slunk away to grieve in private.

Learning Oksana had died both saddened me and struck me with an odd feeling of terror. I imagined that she, as spirit and a type of guardian angel for her lost child, had seen all those moments that I’m not proud of; all those times I lost my patience and my temper with Arina. I realized then that I’ve always wanted, above all, her approval; her confirmation that I’m doing a good job.The biggest salve for my grief was this letter from Oksana's mother, which arrived several weeks after I'd learned of Oksana's death. Our investigator had translated it for us, along with his full report, which included family history, maps, photographs, and even telephone numbers.

Although I’m unable to get Oksana's approval, I am able to get it from her mother (Granny Valentina, pictured below), her sisters (Aunts Elena and Nadya), and her eldest daughter (Ira). Instead of exchanging letters with Oksana, I now exchange letters with her mother, and I'm "friends" with both Ira and Aunt Nadya on odnoklassniki (the Russian version of Facebook).

I am now able to answer the ignorant question “How could her mother give her up?” fully, and in a way that honors Oksansa.

Valentina tells me that Oksana tore out the knees in her pants too, and sends letters like these to her granddaughter.

After three years of correspondence, we had saved and planned enough for a return trip to celebrate Arina's sister's sixteenth birthday. So much about the visit was amazing: we had borsch and cake; we went bowling; we had long conversations while the children played. As a result of those conversations, I am now able to answer the ignorant question “How could her mother give her up?” fully, and in a way that honors Oksansa.

According to our Kazakh family, Oksana’s father had recently died — unexpectedly — of a heart attack. Her entire family was struggling financially, so much so that her 16-year-old brother, the new head of the house, had to quit school and go to work at a furniture factory. Oksana was entangled in an abusive relationship, had already placed her 8-year-old daughter for safekeeping with her family, and just couldn’t bring herself to ask them to care for an infant to boot. So, unbeknownst to them, she took her to the local baby house — because she knew that sometimes you need more family, more backup, more of a support staff. And she loved Arina enough to find that for all of us.

When we get letters from Granny Valentina, they’re always addressed to “My children, Nicole and Scott, and my grandchildren, Arina and Jack.” Arina is ours, and they are hers, so they are ours, and we are theirs. We have all adopted one another.

I’ve always been drawn to Anne Lamott’s “Why I Hate Mother’s Day,” and have posted it on my Facebook page every year since she first penned it in 2010. Lamott insists that her “main gripe about Mother’s Day is that it feels incomplete and imprecise,” because the “main thing that ever helped mothers was other people mothering them; a chain of mothering that keeps the whole shebang afloat.”

She lists the mothers in her life, “many of whom were not women at all but gay men,” and concludes, “I don’t want something special [for Mother’s Day]. I want something beautifully plain. Like everything else, it can fill me only if it is ordinary and available to all.”

So, in that spirit, I will share this Mother’s Day and every Mother’s Day with a Kazakh babuska, and Kazakh teti, and — most of all — with the memory of a joyful, free spirit named Oksana who brought us all together in an act of incredible love and sacrifice.

And I wouldn't want it any other way.