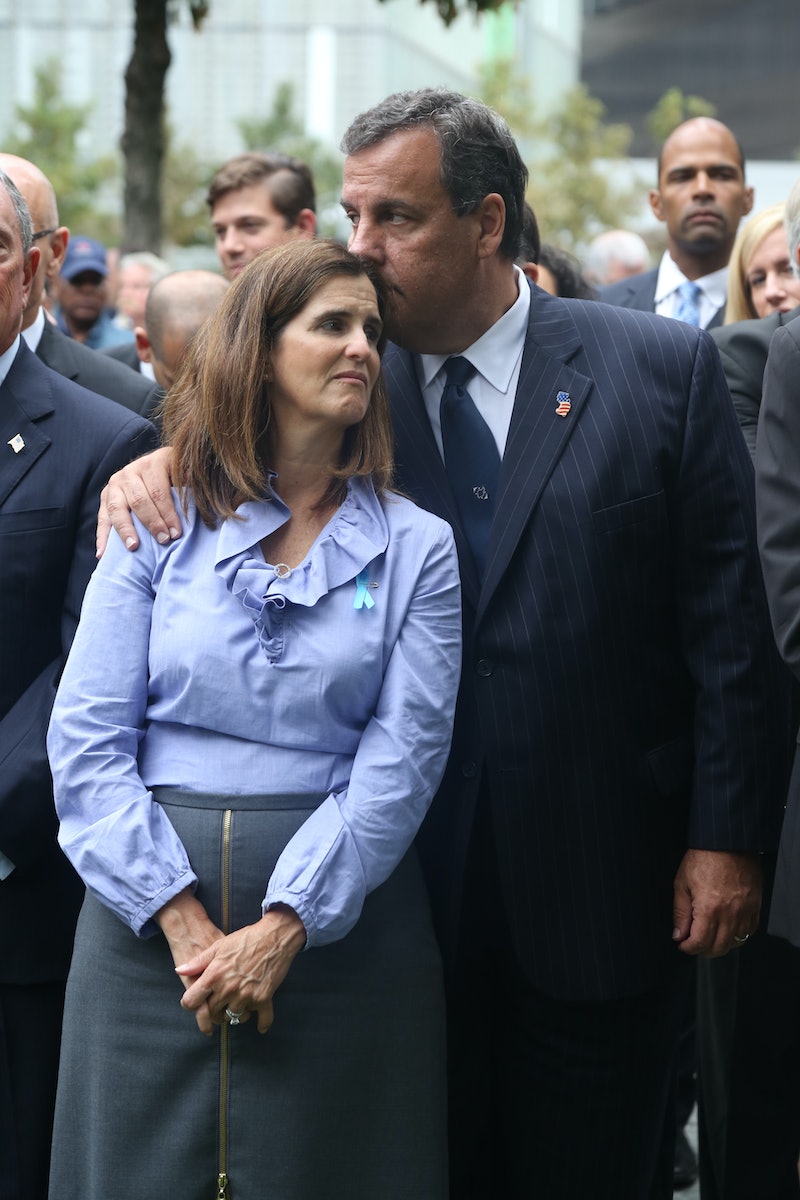 As May beckons, expect the presidential field to gradually become more crowded. More 2016 hopefuls are preparing to officially jump into the race, and another Republican presidential bid may be formally announced soon, after it was revealed on Friday that Chris Christie's wife Mary Pat quit her lucrative job at an investment firm.

It was not explicitly indicated that Mary Pat had quit to accompany Christie on the grueling presidential primary campaign trial. The New Jersey governor's spokesman Kevin Roberts said, vaguely:

Mrs. Christie has decided to take a hiatus from her work in the finance world to spend more time with her family and young children. She recently resigned her position as a managing director at Angelo Gordon.

Mary Pat's resignation at the firm is a considerable financial sacrifice for the family, as the matriarch reportedly earned as much as $500,000 at her job — a figure far higher than Christie's salary, according to The New York Times. Assuming rumors about her quitting to prepare for the campaign trail are true, it speaks volumes as to how big the presidential candidate's spouse's role is in the campaign.

For one, there's the practicality behind it: spouses can help candidates stump in cities or towns that a jam-packed campaign schedule will not allow. Even more than that, spouses are often seen as "extensions of the candidate and as evidence of his[/her] character and image," according to a Purdue University study, and they play surrogate by speaking to the candidate's "authenticity as a human being and as a candidate."

Spouses play an important role in building a candidate's image, and, fortuitously, if people don't like the candidate, a charming spouse could help up the candidate's appeal (if you've ever seen House Of Cards, you'd especially know what I'm talking about here).

It's an opportunity, I think, to humanize a candidate, to show there is more than just a candidate and to have some fun on a campaign, as well.

But the role of a candidate's spouse has evolved since Jackie Kennedy was lauded in the media for her poise and frocks. Spouses these days play an increasingly important part in a candidate's campaign, from deeper involvement in the campaign strategy and active media engagement, like Elizabeth Edwards did for her husband John, to Michelle Obama chastising the discussion as to whether her husband Barack was "black enough" as "silly." According to the Purdue University study, candidates' spouses today are less restricted to merely being seen; they give more speeches and interviews and voice their opinions on a wider breadth of issues.

Then, of course, there's Bill Clinton, former POTUS himself and husband of current presidential frontrunner Hillary. He might make history as America's first ever First Husband. While his role within her campaign remains unclear, with a formidable political record of his own, Clinton's team will have to tread carefully to make sure voters see her as her own candidate, yet use his broad appeal to her advantage. For now, at least, Bill has the luxury of time to ponder on what he would like to be called — First Gentleman? Adam, of Adam and Eve? — should Clinton make history as the first American female president.

More like this
Here’s How Lizzo Is Supporting Abortion Rights After The Roe v. Wade Reversal
By Brad Witter
How To Fight For Reproductive Rights, Based On How Much Time You Have
By Courtney Young
How 5 People Upended Their Lives To Fight For Abortion Rights
By Hannah Smothers
Boris Johnson’s Leadership Is In Question – Again
By Bustle UK
Get Even More From Bustle — Sign Up For The Newsletter