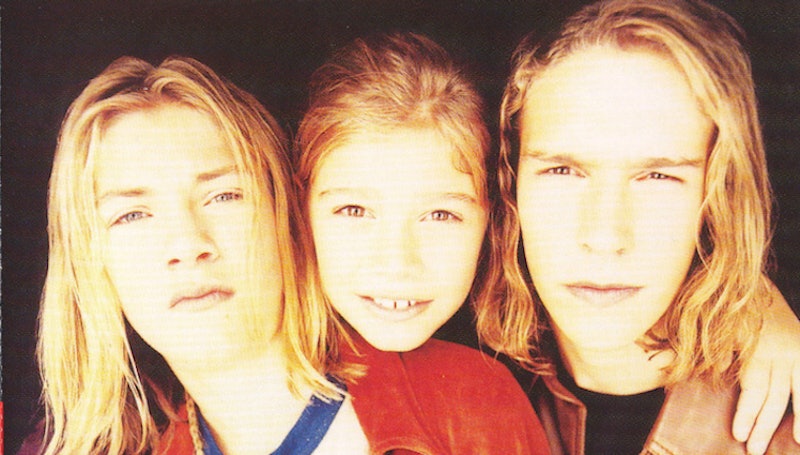 Most of us have waxed nostalgic about the 1990s at some point. Never mind that the fashion was terrible (grunge was not the look) and the internet wasn't nearly as awesome as it is now. One thing that was awesome during that decade, however, was the music. The industry gave birth to some of the best pop artists pretty much ever — hello, Britney? N*Sync? I rest my case! — and genres like rock and hip hop undergoing their own rebirths. Music was basically the bomb during the '90s, but there were also a few songs that were absolutely cringeworthy in their bad-ness. I hated so many tracks back then, but hindsight is 20/20, and though it's taken until 2015 for me to fully grasp their genius, I finally get it. And boy, am I glad I do.

Every generation of music has its own "one hit wonders" — artists that churn out one or two major hits and then fade into oblivion forevermore. The world wouldn't be the same without them. And hey, we've always got the music. If you want to relive some '90s glory and perhaps gain a new appreciation for some of the songs you hated back then, you're in for a treat. I've got the 10 best worst songs from last millennium, and it's about to go down.

Alright, hands down, this is THE best song from the '90s. I don't want to hear otherwise, because any other opinion is not only false, but irrelevant. I couldn't have fully appreciated 'Kiss From A Rose' as a kid — I was only 10 when it came out and couldn't really feel the emotion in Seal's voice, but oh man. This one's an absolute killer. Listen to it now as an adult and tell me if it doesn't move you.

I was all of 11 when 'Breakfast At Tiffany's' came out, so I definitely hadn't seen the movie and probably hadn't even heard of it at that point. It was constantly on the radio back in the day and it used to get on my nerves, particularly because it was always stuck in my head. And yet... that's precisely why it's so genius. Plus, a song that chronicles a man trying to save his relationship by relating to his ex over the Audrey Hepburn movie since they "both kinda liked it"? Come on.

Rock wasn't really my thing as a kid, and Blink 182 were kind of inherently obnoxious, so this song was a complete fail during my adolescence. Of course, it's only now that I'm older that I realize they just don't make rock music like this anymore. Have you ever heard anything more... of its time? I don't think so. It's like a relic of our old culture, and I love it.

Sure, Ace of Base was great — we all accepted 'The Sign' as immediate genius, but 'All That She Wants' was a bit harder to swallow, probably largely because it went over my head. Why would she want another baby? Why would she be gone tomorrow? None of it made sense. Thankfully, now that I'm older and wiser, I've discovered the joy of this early '90s gem, and my life is better for it.

Frankly, this one was automatically disqualified upon its original release back in '99 because, I mean, the dude likes girls who wear Abercrombie and Fitch? What was this, 1996? I don't think so. Of course, in 2015, I can 100% appreciated just how dated and ludicrous this gem is. You've gotta love it.

I think 'It Wasn't Me' is probably Shaggy's best song, but 'Boombastic' is an oft-overlooked work of genius. At the time, I'd never seen an artist who thought the sun shined out of his own butt he way Shaggy did. He really DID think he was smooth — and because of that, the ladies probably agreed. I think we can learn an important lesson from Shaggy even now. You've got to believe in yourself.

Look, I'm not saying I hated 'I'm Too Sexy' back in the day, I'm just saying it was a really crappy song and that sing-speaking is not singing at all, so I wasn't feeling it. Of course, a song like this would never get put out in 2015, so the fact that Right Said Fred managed to get as far as they did with this one is actually pretty impressive. Newsflash, though: Fred was not all that right said in calling himself sexy, but I suppose beauty is in the eye of the beholder.

Admittedly, 'Mambo No. 5' was on my crap list mostly because my name wasn't included in the endless list of names Bega mentioned in the track, and also because it was really annoying and the whole weird swing phase that hit the US during the late '90s really confounded me. But I actually saw Bega on a TV show a couple of weeks ago and he performed this song (yes, seriously) and I realized something important: it's really, really good. Fun fact: This was actually a cover! The original was recorded by Dámaso Pérez Prado all the way back in 1949.

OMC came and they went quicker than I could blink, but not before they left 'How Bizarre' in their wake. That plinky guitar in the melody, everybody in the group singing over each other... it was just an assault on my eardrums. Obviously I've come to my senses now.

Why is there so much shouting? If you want to know who let the dogs out, why don't you ask whoever was around at the time? Screaming isn't going to get you an answer. I love the song now, but that's probably only because my grandma dances on top of my Aunt Debbie's bar to this when she has too many glasses of wine.

Okay, look — full disclosure is that I've always loved, but I know I was in the minority on that one. People just were not seeing the genius of Hanson back in the '90s the way they should have been. However, I've seen a ton of people getting all nostalgic. Too little, too late, people. Taylor was mine, first!

To be honest, the reason this song sucked so much to me back then was because it was by the Backstreet Boys. I was an N*Sync girl through and through, and I just didn't "get" the whole weird zombie thing they were trying to go for. It ain't Halloween, guys. Now that I'm older and wiser, I'm able to be more impartial, however, and enjoy this dose of camp for what it is: amazing.