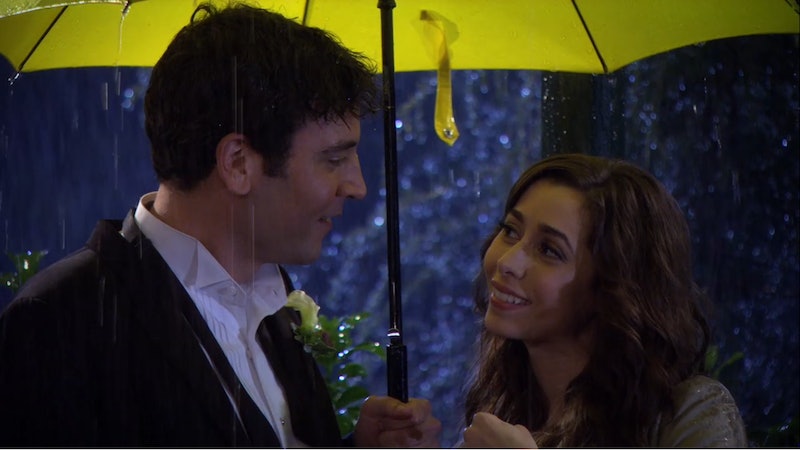 I wouldn't say that I'm a cynic when it comes to love, but my views are decidedly more jaded today than when I entered the dating scene over a decade ago. As a single lady and avid fan of How I Met Your Mother , the glorious optimism Ted Mosby bequeathed to me during each episode was the perfect antidote to even the worst of dating experiences — including a time where a potential date wanted to meet me at his apartment because he "had a bottle of wine that was about to expire." Yes, that is a thing that actually happened and yes, I cancelled the date immediately. Whatever pitfalls Ted experienced in his quest to find his future wife and mother of his children, his belief in true love never waned.

I wouldn't recommend all of Ted's strategies when it came to dealing with romantic interests, particularly when it comes to things like dropping the L-bomb on the first date (please, please, PLEASE don't do that), but his resolve in continuing his journey despite so many obstacles is something that I always admired. While Barney Stinson and Robin Scherbatsky spent much of their time fleeing from the idea of romance (no hate, of course — I think both of them are "legendary"), Ted was steadfast in his search, teaching audiences that it's OK to try again, even after the most heartbreaking of breakups. Let's take a look at the reasons Ted Mosby is the ultimate romantic.

He Accepts People For Their Faults

Nobody's perfect, and although Ted often waxed poetic about finding the "perfect woman," he tended to be pretty accepting of his ladyloves' neuroses.

I wasn't a big Robin/Ted shipper (sorry, guys), but there is much to be said for Ted's intuition when it came to Robin's self-admitted guardedness.

Ted's grand gestures may not have always gone over so well, but the sentiment was always appreciated.

You couldn't ask for a better supporter of nuptials, an anniversary, or even a first date than Ted Mosby.

Some would argue that Ted took too many chances when it came to love, but what would a true romantic be without a little risk?

He's Also In Love With Bacon

To be honest, I felt borderline romantic about the breakfast sandwich I had this morning — the egg-to-cheddar ratio was on point #noms.

His Romantic Inclinations Never Get Stale

In HIMYM's series finale, the show finally lived up to its title by having Ted meet The Mother, otherwise known as Tracy McConnell. As time jumped forward, we witnessed Ted's commitment to romance and the idea of finding a true love remain unshakable.

I know that a lot of people took issue with the final episode of HIMYM, and — as a staunch Barney/Robin shipper — I was more than a little heartbroken to see Barney and Robin's marriage end in divorce, and to see Ted's marriage end when illness claimed Tracy's life. That being said, the final seconds of the finale also epitomized what a true romantic Ted is, as he performed one last grand gesture for Robin. With permission from his children, Ted moved forward with the woman considered the first of his two true loves. I don't think it gets much more romantic than that. Hey, Ted...