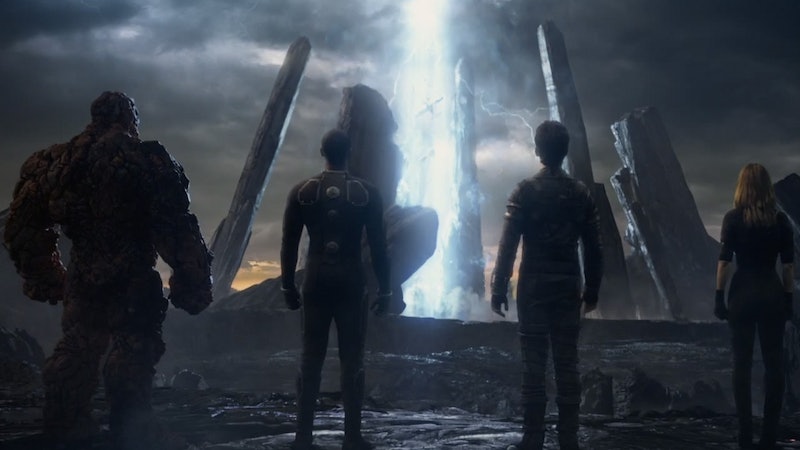 Summer means superhero movies, and the 2015 blockbuster season is no different. We have The Avengers: Age of Ultron coming on May 1, and Ant-Man on July 17 — but the superhero movie it is time for you to get psyched for is the Fantastic Four reboot (hitting theaters August 7). That's right, superhero fans — I said Fantastic Four, and I don't mean the one that starred Jessica Alba back in 2005.

Despite very little information about the plot being known (aside from director Josh Tank and one of three credited writers Simon Kinberg confirming that the movie is not based on any single issue of the beloved Marvel comic book series The Fantastic Four) the movie has been surrounded by its share of controversy. Comic book fans have (ridiculously) bemoaned the casting of Michael B. Jordan — a person of color — as Johnny Flash, due to the character always being drawn as white. This is unfortunate for a few, obvious reasons — the biggest, of course, being that a character's race should never define their talent or how perfect they are for any specific role. Additionally, the film did suffer several delays while the script passed through the hands of three different writers

What is most worrying, however, is that with so many big franchise projects on the horizon this summer, the incredibly intriguing new Fantastic Four film could get lost in the shuffle. Yes, people were talking when the casting news broke, but the buzz is more of a low murmur at this point — and that needs to change. If the latest trailer is any indication, Fantastic Four may be the best superhero movie to come out of 20th Century Fox so far.

The Fantastic Four Deserve Better Than the 2005 Movie

It was well past time for the Fantastic Four to get themselves a reboot and distance the franchise from the undeniably cheesy film that 20th Century Fox unleashed on the world in 2005. Over the past decade, superhero movies have matured — and the joke-y, no stakes world created in the original film franchise has no place in theaters today. Tank is clearly taking the superhero family in a new direction, and that direction is the future.

The tone of the trailer is serious without being humorless. It's an origin story that draws from the best parts of the comics without being beholden to any single arc. By taking us back to the beginning and putting a new twist on the classic story of Reed Richards, Sue and Johnny Storm, and Ben Grimm, Tank has opened up endless possibilities for the new franchise and made it a perfect way to introduce a new generation to the heroes.

The Young Cast Is Comprised of Promising Actors

Michael B. Jordan first came to our attention in Jason Katims' small screen productions Friday Night Lights and in Parenthood where he stole many hearts. Since then, Jordan has become one of the most sought after young actors in Hollywood, and his performance in Fruitvale Station was unparalleled. He brings an easy confidence to Johnny that you just cannot look away from in the trailer. Meanwhile, Kate Mara is doing something completely new with Johnny's sister Sue, who has a rich personality in the few glimpses we see of her. She possesses the same confidence her brother does, but with a darker edge and sardonic wit.

Then we have Miles Teller as super-genius Reed Richards. His character benefits the most from being aged down: As a younger Reed, Teller is less cocky than his predecessor Ioan Gruffudd, but still incredibly intelligent. Teller adds a bit of quirkiness and social awkwardness to the young Reed that makes the character more accessible.

Finally, there's Jaime Bell as Ben. Bell arguably has the toughest role thanks to The Thing's transformation, but, according to The Huffington Post, the actor sought out the help of motion-capture actor legend Andy Serkis to help keep Ben's humanity at the forefront even when he is a lumbering pile of rocks.

The Trailers Are Mindblowingly Good

Fantastic Four does not just look like a good superhero movie, it looks like a good movie period. Even if I had never heard of The Fantastic Four before, I would still want to see the movie based on the trailer. The acting is strong, the mood is tantalizing, the sci-fi touches are incredible (seriously, those space scenes have to make you geek out), and the characters feel fully formed. Yes, Tank is taking liberties with the characters and stories instead of sticking to a straight adaptation, but that is one of the best reasons to be excited. This is one of the few franchise movies where there is a surprise factor in play. Isn't the goal of any movie to entertain and shock the audience? Fantastic Four is well on its way to doing both.

Even though it won't make its theatrical debut until the end of summer, don't forget about Fantastic Four. As much as I love The Avengers, there is a new team in town and they look every bit as exciting as Iron Man, Thor, and the rest of the gang.