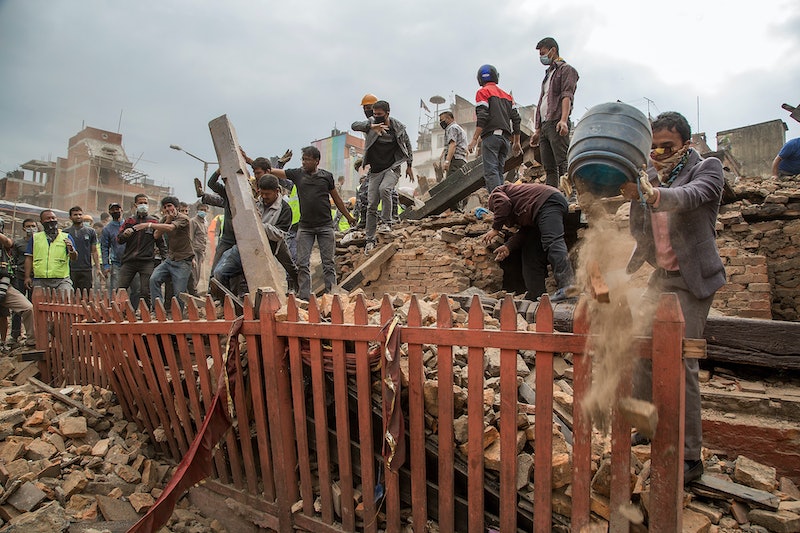 Only hours after a 7.8 magnitude earthquake claimed an estimated nearly 1,000 lives in Nepal on Saturday morning, requests for donations are making the rounds on Twitter. Aid groups such as American Red Cross, CARE, and Save the Children are deploying on the ground assistance to help the Nepal earthquake victims. But it’s been five years since chaotic relief efforts in the wake of the Haiti earthquake drew worldwide controversy. If texting your $10 to help the victims of Nepal did nothing to eliminate that pit of worry in your stomach, it’s hard to blame you. (Update: The death toll has now risen to over 3,800, and more than 6,000 people are thought to be injured.)

According to The New York Times, the earthquake in Nepal was about 16 times more powerful than the 2010 Haiti earthquake. Lack of communication from the country further amplifies concerns over the exact scale of the earthquake’s destruction. While nothing should discourage you from contributing to such badly needed relief efforts, it’s normal to question whether aid groups have improved their disaster response since the last incident of such a massive scale.

Many organizations such as the United Nations, aid groups and experts in the field have weighed in on what went wrong in Haiti and what needs to change in the light of another natural disaster. Now is a timely opportunity to review the problems that first cropped up and what nations, aid workers and the general public can do to make sure the mistakes that happened with Haiti don’t repeat in Nepal.

If you were one of Wyclef Jean’s many Twitter followers who donated to Yéle in Haiti’s aftermath, you probably learned this lesson the hard way. Financial mismanagement riddled most of Yéle’s efforts in Haiti, with had raked in more than $16 million from the musician’s fans concerned about the earthquake. Following the Yéle’ fiasco, the Better Business Bureau came out with a list of mistakes to avoid when donating to disaster relef campaigns. First off, it’s best to stick with well-known organizations such as American Red Cross and Oxfam. If a charity’s name includes the name of the disaster, make sure it’s affiliated with an older, reputable organization and didn’t crop up overnight. Be sure the charity details the exact efforts your money is going towards. Will your dollars go to purchasing food and water for the victims or to paying staff? BBB warns against shipping unsolicited donations such as food and clothing. Relief organizations prefer to buy such items near the site of the disaster in order to eliminate the time and costs associated with delivery.

If you’re unsure of whether the charity you’re considering donating to is legit, BBB’s Wisegiving Alliance can give you a comprehensive report on how the organization measures up.

Engage with the local community

A big criticism of the international community’s response with Haiti was its lack of involvement with locals in vital decisions.

Francois Grünewald of Groupe URD noted that many aid workers arrived in Haiti with no knowledge of the local language. Many NGOs bypassed working with local municipal governments entirely.

“In the future, the aid system won't be able to function as an 'occupying alien' as it largely did in Port-au- Prince, and instead will have to engage with local people, local authorities and local realities.”

That being said, engaging with the local community is easier said than done, especially during times of turmoil and confusion in politically turbulent nations, as was the case with Haiti. United Nations Emergency Relief Coordinator John Holmes writes candidly of the first few months of his time in Haiti and details how frustratingly impossible a balancing act this can be, such as when the Haitian president refused food aid after the first few weeks of the earthquake. Especially during times of turmoil and confusion, the needs of a host country and the missions of a aid organization can conflict more often than one would think.

“One of the most common criticisms of the response is that we failed to engage enough with local actors, even when they had begun to recover from the devastation of the earthquake, and failed to understand well enough the local political, economic and social dynamics. The early problems of access to the Minustah base, and of too many meetings in English, have been well-documented. These are certainly valid points. Many mistakes were made.”

Because 99 percent of the aid provided to Haiti came from the way of outside nations and organizations, Haiti is often referred to as “The Republic of NGOs”. A weak, national government and a bevy of NGOs with no one entity to reign them all in was a recipe for disaster. The Nation reported that NGO’s in Haiti used a meager one percent of the money that poured in after the disaster on actually recovery assistance.

As Vijaya Ramachandra of the the Center for Global Development notes, “A system for registration of NGOs would be a good start, especially as the government still has limited capacity. Eventually, the government might be able to monitor NGO activities and ensure coordination.”

It’s likely the international community’s response to Nepal will be an indication of whether the status quo has changed for international aid. But aid workers and other experts often point out that what went wrong with Haiti has gone wrong during natural disasters in the past, and will continue to do so in the future. Lessons learned or not, the unplanned nature of natural disasters, the sheer scale of their destruction and the differing geographical, political and societal factors of the regions affected can make each recovery effort an entirely different challenge.

Dr. Mirta Roses Periago of the United Nations sums up the problem with Haiti, and other natural disasters in a nutshell:

“If the impact was unprecedented, the organization of the response was not. It followed the same chaotic pattern as past disasters. Information was scarce, decisions were not evidence-based, and overall sectoral coordination presented serious shortcomings. Management gaps noted in past crises were repeated and amplified in Haiti. The humanitarian community failed to put into practice the lessons learned”.