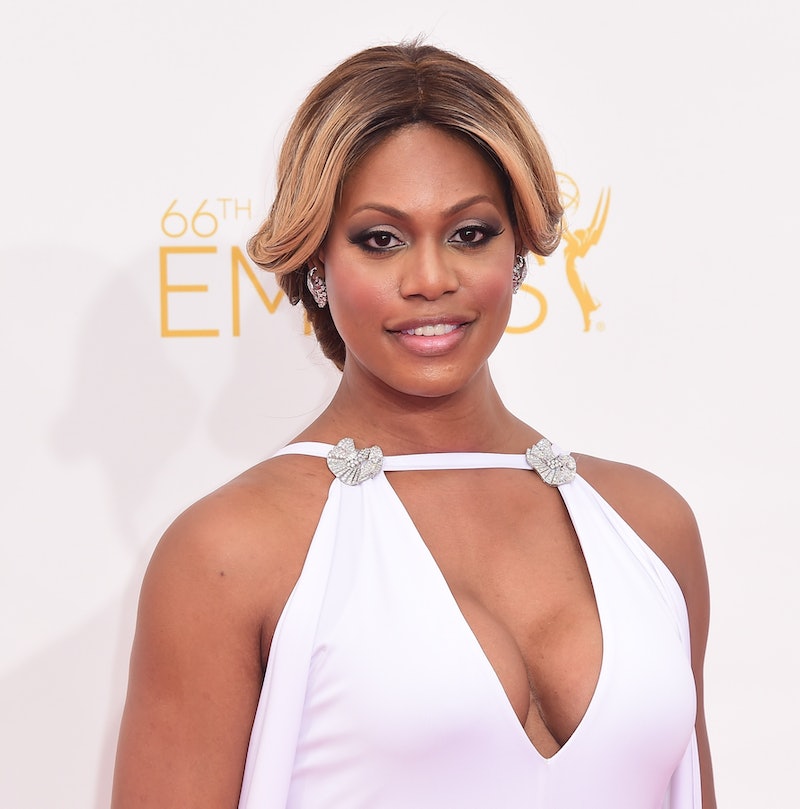 The White House Correspondents Dinner (affectionately known as Nerd Prom) is officially under way and we've already seen stunning dresses, listened to both press and celebrities talk while rubbing elbows, and heard some wonderfully inspiring sentiments. Most notably, we heard from the flawless and fierce Orange is the New Black star Laverne Cox who spoke with CBSN about Bruce Jenner, his big interview and the importance of his coming out during the highly publicized interview with Diane Sawyer.

"I think a lot of people tuned in expecting to see a spectacle and they saw a beautiful human being — a person who’s a parent who cares deeply about their family and what my visibility over the past year has taught me is that visibility does matter, it can save lives," she said.

Cox would know, as she is one of the most prominent transgender stars and activists around. She's seen how her high visibility can help other young trans men and women, but ultimately, visibility is not the only thing the trans community needs.

"I’ve heard from so many people that have been saved because of my visibility, but visibility still doesn’t save a lot of trans lives a lot of those who are still committing suicide, still being murdered at disproportionate levels, still experiencing job discrimination, housing discrimination, healthcare discrimination," she said. "There is so much more work that needs to be done to policy and structural changes."

Hopefully, we can all agree there is plenty more work to protect the entire LGBTQ community both in the United States and around the world, and Cox has some excellent ideas on where to start. First step, Washington D.C., where Cox hopes that legislation can address the issue of widespread violence against transgender women.

"There’s so many segments of transgender life where we’re just not counted … we need a bill on a federal level that would protect all LGBT people from job discrimination," she said, adding "Then [we need to deal] with the issue of violence against trans women particularly ... when you look at the violence its also about intersectionality. So that we understand that the people who are at most at risk are also people of color and people who are poor. So we have to be able to deal with those issues as well if we want to end the violence against trans women."

When she was asked if all trans people have obligation to be as informed and vocal as she is, Cox had some great advice about respect and privacy.

"I’ve always said that for any trans person to come forward and claim that identity in a world that tells us we should not exist is revolutionary, and it is very difficult, it is not easy being as visible as I am," she said. "If you go to my Instagram feed you’ll see what kind of comments I get. So it’s not always, it’s not easy and it’s not for everyone and I believe that everyone has to decide in what ways they can get involved in their community. Not everyone can do this, this is a lot. I think we have to meet people where they’re at and respect people’s privacy when they need it."

I know that we have a lot further to go in the quest for total equality, but it is inspiring to see this issue being discussed so openly and with such compassion. Hopefully there will be many more conversations like this, and many more role models as wonderful as Laverne Cox.