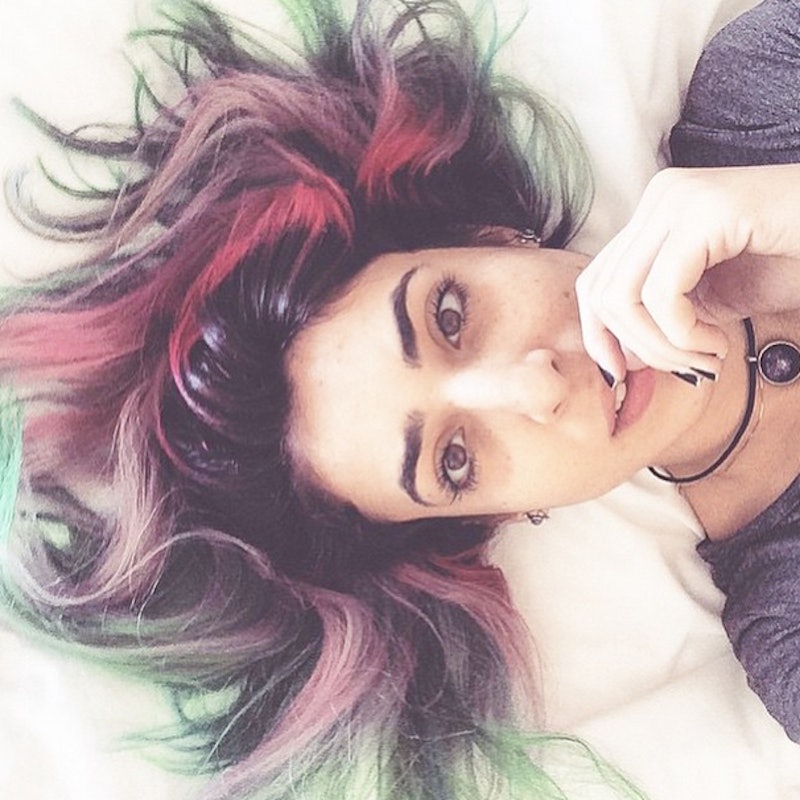 Last weekend, I made a friend while waiting in line at a club; we bonded over '90s choker necklaces. I’m not the type of person who typically waits in lines outside of clubs — not because I’m a clubber who bypasses lines but because I’m an introvert who bypasses clubs for less light-strobing milieus. But there I was, wearing enough eye makeup to induce conjunctivitis and synthetic leather to catch on fire should the person next to me light up a cigarette.

A girl walked past me (she was a clubber bypassing the line), pointed to my neck, then pointed to hers, and gave a cryptic hand gesture that resembled a thumbs up. We were both wearing chokers, that '90s punk trend slowly making its way to mainstream accessories-wear in 2015. We had enough time before she jumped the velvet rope for me to find out that she got hers, a metal chain style, from Forever21. I told her mine was from Claire’s but we didn’t have enough time for me to really get into the passionate discourse on chokers that’s been going on inside my head for the past year.

I revisited the choker for the first time since 1998 exactly one year prior to my night out at the club. I know this because both nights were to celebrate the same friend’s birthday, and last year, in a, “It’s 3 p.m. on a Saturday afternoon and I have no idea what to wear for a party in four hours,” moment, I took the subway to the type of city block where Zara, Urban Outfitters, and H&M find themselves. I hurriedly went through each store like I was a contestant on the The Look for Less, minus Elisabeth Hasselbeck popping up behind clothing racks to check on my progress. At home an hour later, I surveyed my provisions: I had an off-the-shoulder dress that was actually a shirt, a pair of faux leather pants, and a beaded necklace. It took me too long to realize that the beaded necklace was in fact a headband, and trying to return it would be futile since it was final sale.

I didn’t want a headband, I wanted a necklace, and that’s how I fell upon my first choker. I put the headband around my neck but it was too loose to pass as a necklace so I cut it and tied it in the back. It was tight but not strangling tight, so I rolled with it for the night. Since then, I’ve bought numerous headbands ranging in prints and fabrics from leopard and calf-skin to braided mesh and gold beads. The reason I keep coming back for more? Bang for your buck, baby. I’ve mostly bought on-sale Anthropologie headbands that run for no more than $20, with the occasional $10 steal. If that’s not cheap jewelry, I don’t know what is.

The choker I wore the other night wasn’t a headband but a classic, mid-90s style taken right from the Spice Girls Movie: the stretch tattoo. I got it for a cool $7, which I thought was a bargain until a second ago, when I saw similar ones going for $2 on eBay. Like most of my fashion inspiration, I first saw the trend on the street. More specifically, I was walking home from work and almost tripped over two nine-year-old girls running down the street. I was too fascinated by their stretch tattoos to be annoyed. I confirmed with a teacher friend that yes, stretch tattoos are coming back in a big way in elementary schools. That’s all I needed to know, so I went to the only place guaranteed to stock them: Claire’s.

It was during my first foray into Claire’s in the last 10 years that I bought a third, and most addicting, choker style: the flash tattoo. Flash tattoos, for the uninitiated, are the best thing since sliced bread. They’re jewelry-inspired temporary tattoos that usually come in black and metallic colors. I’m no pioneer in the world of flash tats — Beyoncé wears them on yachts, and Vanessa Hudgens and Alessandra Ambrosio have donned them at Coachella. They’re an alternative to permanent tattoos and a non-committal way to look as though you’re wearing tribal jewelry. They have a badass look about them, especially when worn around your upper arm. I’m partial to the flash tat in its choker form, though a warning that it takes some heavy duty scrubbing to come off.

If you needed further, official fashion industry validation that chokers are a jewelry trend worth trying, then look no further than Dior’s Spring 2015 ready-to-wear show. And also, Kate Moss is an original fan of the choker. If that’s not a draw, I don’t know what is.

More like this
42 Black Owned Fashion & Beauty Brands To Support Today & Always
By Mekita Rivas, Shea Simmons, Kui Mwai and Dominique Norman
’90s-Inspired Goth Glam Is This Summer’s Sultriest Makeup Trend
By Danielle Sinay
This Blurring Balm Is The Ultimate Mattifier For My Oily Skin
By Danielle Sinay
Hailey Bieber's "Glazed Donut" Nails Are So Minimalist Chic
By Danielle Sinay
Get Even More From Bustle — Sign Up For The Newsletter