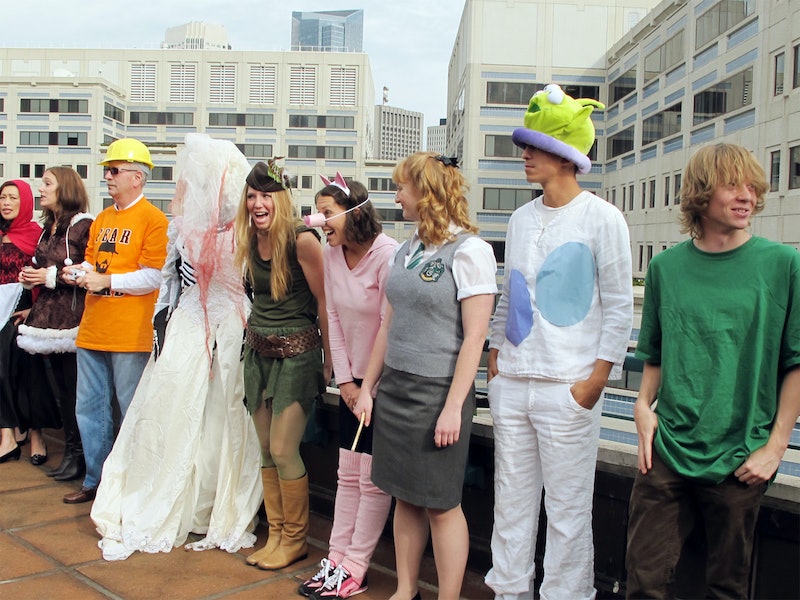 Yeah, yeah, you didn't think anyone remembered your existence this Halloween and then this morning you woke up to 25 panicked text messages, insisting that you attend all these fabulous parties. It's practically a Cinderella story!

Unfortunately, you have nothing to wear and no budget because it's so late in the month. Also, you aren't really a Halloween person. These costumes are legitimately one-step; they require only one additional accessory, besides, for the most part, your normal clothes. You won't win any best costume awards, but you'll look just clever and blasé enough to be mysteriously appealing to all the hipsters.

Fake ears: You're an animal. Cow, bear, don't care. This is your song. Or this, if you're that bro.

Those mustache-nose-glasses things, otherwise known as "Groucho Glasses": You're a person in disguise. Or a hilarious prankster.

Piece of cardboard: Someone protesting or on strike. What are you mad about? Write it on the sign, honey. Let it all out.

Flowered underwear: You're the geek from Sixteen Candles.

Frame: You're your own self portrait. Surely you can come up with some pretentious commentary to accompany this statement.

Trickle of blood down mouth: Super-subtle vampire who never gets caught. Or the cover of True Blood.

Black eyeliner: Margot Tenenbaum. Johnny Depp circa Pirates of the Caribbean on a set break.

Camera: Paparazzi, fashion blogger, food blogger. This is a great excuse to take pictures of your crush.

Sunglasses: Unknown Hollywood actor. NEVER REVEAL YOUR NAME. Keep your hand partially over your face as you slip through the party.

Spoonful of cinnamon: Some poor soul about to take the cinnamon challenge.

One piece of fancy jewelry: Runaway princess. Wear plain clothes and act like you forgot to remove that last diamond earring as you scrambled over the castle moat.

And for those who aren't afraid of punning, here's a terrible idea. Wear your iPod around your neck. When someone asks you what that's for, tell them you're the Titanic, and you're synching.