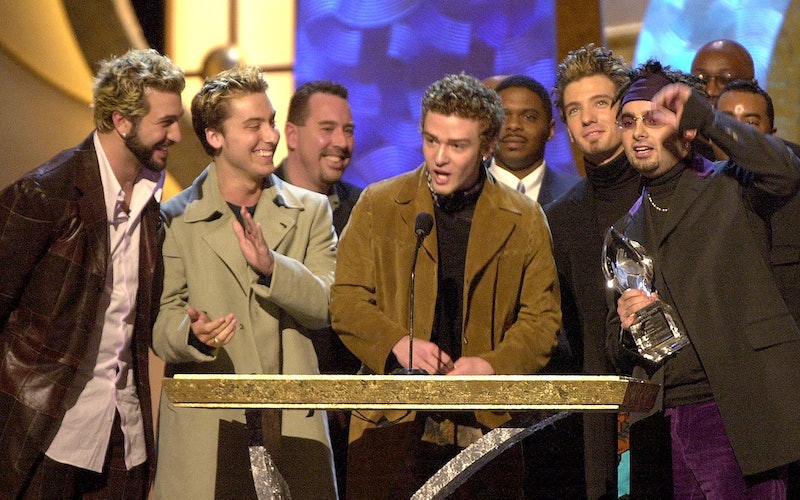 The early '00s were a strange time for music. The TRL era was going strong and that meant pop and boy bands reigned supreme. If you lived in the south like I did, it also meant Lonestar was a big deal. The Christian school I attended was so small, I started attending homecoming dances at other schools around the age of 13, and by the time I reached my senior year I had danced to enough questionable songs to make the world's worst mixtape. (Sidenote: why did The Chicken Dance make such a strong comeback during this era? Did it only happen at my school? I have so many questions.)

Since I didn't date in high school, none of the melodramatic slow songs I awkwardly swayed to have much trauma attached to them for me. No, my embarrassment is reserved for my questionable taste in tunes. And as part of the student council, I'm sure I was responsible for some of the worst offenders getting so much play, especially the Backstreet Boys' ballads. As the lone Backstreet girl at a school full of 'N Sync lovers, I had to represent my boys. (And if the list seem to mostly include songs by dudes, let me just point out the music by Destiny's Child and Spice Girls holds up so much better than anything that came out of the '00s boy band obsessed culture.)

I know I'm not alone in dancing to any of the nine songs below. Even if you didn't go to a tiny private school, these nine "classics" were unavoidable at high school dances.

Why was "Truly, Madly, Deeply" so enduring? It was released way back in 1997, but it was played at every dance I ever went to in the '00s. Back then, I distinctly remember the song making me feel terrible about not having a boyfriend. However as I listen to it now, I realize it is super creepy. What is up with all the mountain and ocean imagery? Are those sex metaphors? Because if they are, my former principal would be so pissed.

Oh, Justin Timberlake, this song is just the absolute worst. It is also a perfect example of why we all loved the '00s boy bands. Yes, lyrics like "I promise you, never will you hurt anymore" sound absurdly over-dramatic now, but when I was a teenager, it sounded like the kind of promise a girl could hang her heart on. It is the most simplistic possible rendering of teen love. It also uses way too many bells.

Looking back, I'm beginning to realize how out of touch my friends and I were. This song came out in '94, but it was played at every single dance. Again, it's crazy over the top. The music is very soft jazz, like something that might show up in an old Tom Hanks romcom. The sincerity is so over the top, I almost believe these guys, but I have been so jaded by adulthood I just cannot allow myself to trust them when they say "they will always be there," especially since this band fell off the face of the planet.

So. Much. Twang. You know what is awkward? Dancing to this song with your totally platonic friend who you only sort of tolerate because he is the only guy left without a dance partner. This is a song for wedding receptions not school dances.

5. "Shape of My Heart" by Backstreet Boys

Forget homecoming, I can't believe how many times I slow danced to this song alone in my bedroom. At least "Shape of My Heart" has a bit of a bite to it. That's because Backstreet Boys were way more mature than 'N Sync. Seriously though, this song has such a bizarre beat it was hard to get your slow jam moves on and keep up with the changing speeds. Are we fast dancing? Slow dancing? Shuffling around like idiots?

There are two problems with this song. One, it's by Creed. Two, it's about a dude finding out he is about to become a parent. The inappropriateness is so blatant, I don't know how we slipped it past the chaperones. I also don't know why we were all so fascinated by Creed. It was a much simpler time, guys.

This song reminds me so much of Lolita now. I know the girl in question is 18, but it's still so stalkery. He stands outside her window everyday in the pouring rain? This is not a message we should have been sending to teens caught up in the post-game elation of a homecoming dance.

This song was serious business. When it came on, you had to have a partner, even if it was just you and five other girls dancing in a huddle. Faith Hill was our everything and her soaring ballad was a homecoming staple...now, well, let's just say "Breathe" has not aged well since it equates love with "breathing." This was way before Warm Bodies, kids.

I'm going to leave you with this emo rock ballad. This song is insanely depressing, and the only reason why I can imagine it was played at homecoming is so we could all fantasize about dancing with JTT instead of our sweaty guy friends.