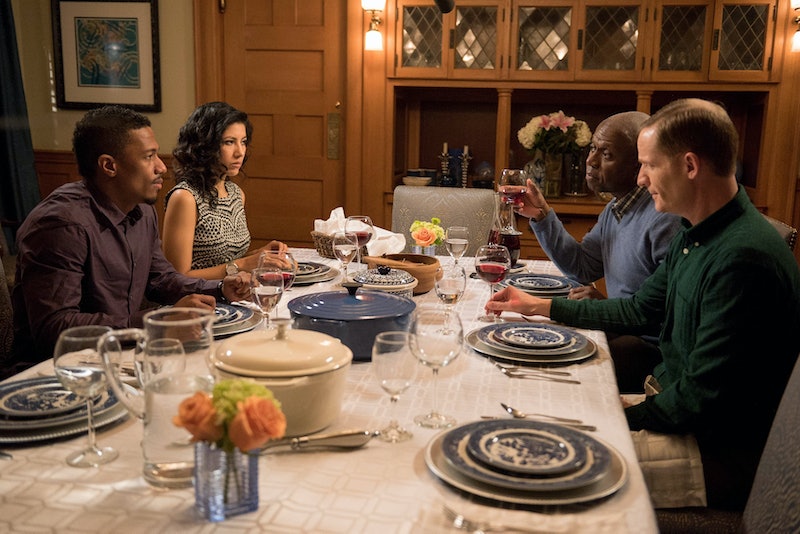 It's been a while since we last went to work with the Brooklyn Nine-Nine gang, and a lot has happened in these past few weeks. You expect hilarious situations from Brooklyn Nine-Nine every week. However, what you don't expect is to see any sort of vulnerability from the always tough, stoic, and private Rosa Diaz, but that's exactly what happened during Sunday night's episode, and it was actually lovely to experience.

The episode kicked off with Jake suffering a rough face plant while tracking down a perp, leaving him with some nasty injuries that were supposed to leave him out of commission for a week. After I saw this, I had some worries about the episode. How many times have we seen episode story lines that were variations on this exact plot where Jake is ordered to not work for some reason and when he just can't pull himself away from the force, it has disastrous, albeit hilarious, results? Please tell me Brooklyn Nine-Nine hasn't become formulaic in only its second season.

It took a bit of time, but by the time half of the episode was over, Brooklyn Nine-Nine showed that this was thankfully not the case. When Rosa finally gave in and accepted Kevin's invitation to come over to have dinner with him and his husband Captain Holt with her boyfriend Marcus in tow, she had hoped that inviting Amy and Gina would be effective enough "intimacy buffers" to prevent anything weird from happening. Remember, Marcus, who is played by guest star Nick Cannon, is Captain Holt's nephew, so the fact that he has been dating Rosa has made things all kinds of uncomfortable between them.

But as we've seen time and time again on Brooklyn Nine-Nine, nothing ever goes as planned, and we're thankful for that fact since the show is more hilarious and entertaining for it. Amy and Gina show up late because of a subway delay. The two couples go ahead and sit down to dinner anyway, and when Rosa is reminded of her sister, who is pregnant, she rushes out of the room. When Captain Holt checked up on her, she dropped a bombshell: She thought she was pregnant.

Whoa, whoa, whoa. I don't think we know the date of Rosa's birthday, let alone a huge and important personal detail like this. And the fact that Captain Holt was the first person she told, the man she wanted more than anything to maintain a professional relationship with was just too good.

While it was shocking that Rosa would be so open with Captain Holt, if you think about it, it actually made more sense than most outcomes on this show. Captain Holt is not only the leader of the 99th Precinct, but he is also the honorary father of all of his subordinate police detectives. Not too long ago, we saw him comfort and laud Jake when his deadbeat dad let him down. Amy is constantly seeking his approval. So it's not surprising that Rosa would also choose to confide in him, even if his nephew was responsible for this possible accidental pregnancy. We all could have done without him asking if her breasts were tender though. No one needed to hear that.

In the end, Rosa's presumed pregnancy was a false alarm, but we still got a really touching moment when she thanked Captain Holt for being there for her in the end. It was so refreshing to see the most no-nonsense characters of Brooklyn Nine-Nine let their guard down for once. I wouldn't want that to happen every week, but it's nice to know that they're real people underneath all of that badassery.