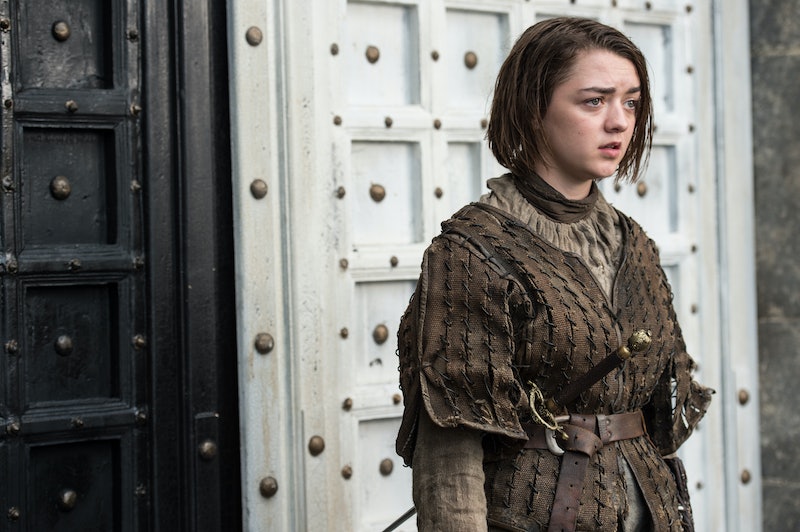 Now that we've seen almost everyone's true colors on Game of Thrones , I think it's safe to say that Arya Stark is the only person left to root for blindly. Sure, I still want Sansa to wind up happy or victorious, but she's being led around like a lamb by Peyter Baelish. Yes, I still back Daenerys, but she's reaching a tough spot that's causing her to make some dark decisions. Jon Snow has just beheaded a man who was begging desperately for his life with a coldness in his eyes that we've not yet seen. The only person left who we can support blindly and wholeheartedly without an ounce of reservation is Arya.

Think about it: Even when Arya killed a man for the first time, the moment wasn't about Arya breaking bad, it was about Arya shirking the necessity to grow up to be a lady. It was about Arya taking her dangerous life into her own hands and building up her attitude to match that new life. She's not running off to find a husband to give her power as Sansa and Margaery did (in their defense, not many women can actually throw the power of a marriage to the wind in the patriarchal world of Westeros). Arya takes her journey into her own hands, ventures to Braavos, and finds the House of Black and White.

But all this isn't necessarily a complaint. Arya is filling a very important role in a cast of men and women who fill us with complicated emotions. While we can root for Tyrion, Jon, and Dany to our hearts' content, they challenge us in that no one person is wholly good or wholly worth rooting for. We need Arya to keep us drawn in, to keep our faith going. We need to believe that there is someone left — and a Stark at that — who has a chance of emerging triumphant from this entire, sprawling ordeal.

In fact, while I'm not one to shy away from book spoilers, Arya's storyline is one that I've willed myself to forget. It's simply too much fun to watch her succeed and struggle to succeed. And while she's got her faults too, I don't think this complex world would be quite as much fun to explore without her as our anchor.