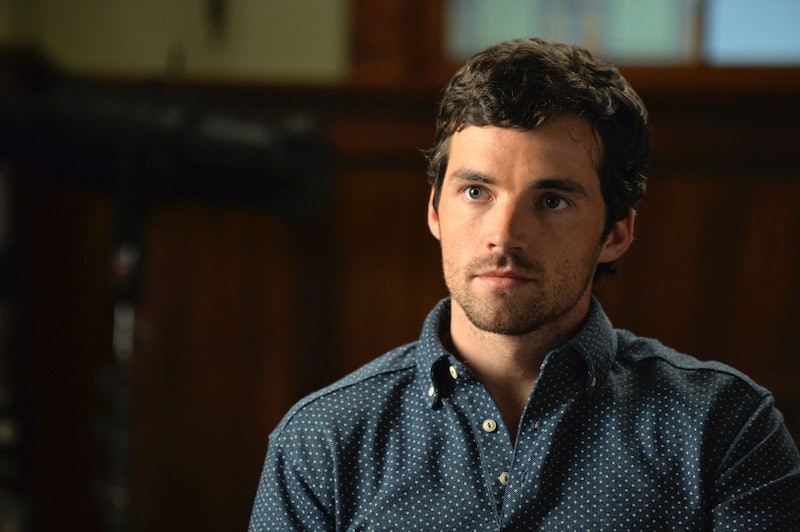 It seems to me that Pretty Little Liars builds its hot guys up just to tear them down and make us doubt their intentions (the only one safe from this is Caleb, because he is a perfect holy angel). Remember when we all though Toby was A? And let’s face it — Ezra is no angel, either. From day one, he was painted as this hot teacher type, and it was just a shame that he and Aria couldn’t be together. So young! So attractive! So lost!

Frankly, I don’t buy into this whole “star-crossed lovers” vibe that Aria and Ezra have going on. Why? Well, the first reason is that I am old enough to recognize that Ezra is abusing his power by having a romantic and sexual relationship with a student. How old is Aria when the show starts? 15? 16? That’s actually techinically statutory rape, guys. That is an illegal relationship right there, OK? I’ll always maintain that grown men who habitually date teenage girls are stuck in a state of arrested development themselves, so you know, do the math.

The second reason is that it’s very easy to forget just how much Ezra knew about Aria and her friends before they started seeing each other. If you’re up to date on PLL, go and re-watch Ezra and Aria’ relationship and tell me that you don’t see Ezra’s face popping into your dreams at night. Thanks to Netflix and a lack of a social life, I have recently completely a fairly lengthy reprisal of Pretty Little Liars, and I’m now pretty grossed out by Ezra. Think about these facts below and tell me you don’t agree.

Ezra Dated Ali Before She Disappeared

Um, Ezra got involved with a 15-year-old girl when he was still a senior in college, and I’m not talking about Aria — Ezra had a little do-to-do going on with the one, the only, Alison DiLaurentis the summer before she disappeared. He drank beers and ate pie, she lied about her age: It was the stuff that true romances were made of. Ezra wasn’t really pleased that Ali lied about her age, and their summer dreams ripped at the seams, you know what I’m saying? Except then Ali disappeared and Ezra became obsessed with her, leading to…

Ezra Was Writing A Book About Ali & Her Friends

Like a great many writers currently pursuing graduate degrees in writing (as I blow my nose into my diploma, sob), Ezra thought he was the next insert-author-name-here. In Ezra’s case, he went all Truman Capote and decided to write a true crime story about Ali’s disappearance. In order to conduct research on Ali and her gang, well, he went…um, way deep undercover. The fact of the matter is that Ezra knew who Aria was when he picked her up in that bar, and that makes his following actions for the next um, whole series, totally disgusting. Using a 16-year-old girl so you can write a novel that will most likely be used to line birdcages? Real classy, Ezra. (Seriously though, read In Cold Blood if you have the time — Capote changed a whole genre.)

After they started dating, Ezra gently cajoled (and sometimes not that gently) all of Aria’s secrets out of her under the guise of being a good boyfriend. “What a nice guy,” we all thought. “He’s so there for her!” Well, we were all hornswaggled, because Ezra was just using all of these naughty bits to pad his book. That’s the ultimate betrayal, don’t you think?

Ezra Is A Lying Liar

Look, the book and Aria aren’t the only things that Ezra has lied about. He wasn’t exactly forthcoming about the circumstances surrounding Malcolm (and then he let his 16-year-old girlfriend babysit his illegitimate son), and he lied about his real name, as if someone would care that he was a member of some moneyed dynasty. Ezra, you doth protest too much.

If Ezra knows everything about everyone, I’m willing to bet that he already knew that Charles DiLaurentis existed. After all, he’s spent like four years researching everything there is to know about Ali — a trip to Radley to visit her deranged brother (speculation, but still) is certainly in the cards. Why didn’t he tell anyone about? He’s probably writing another book.

So, there you have it, folks. In my mind, Ezra is the third most despicable (behind Charles and Detective Wilden) character on Pretty Little Liars. Now I need to take a shower to wash the skeeze off of me.