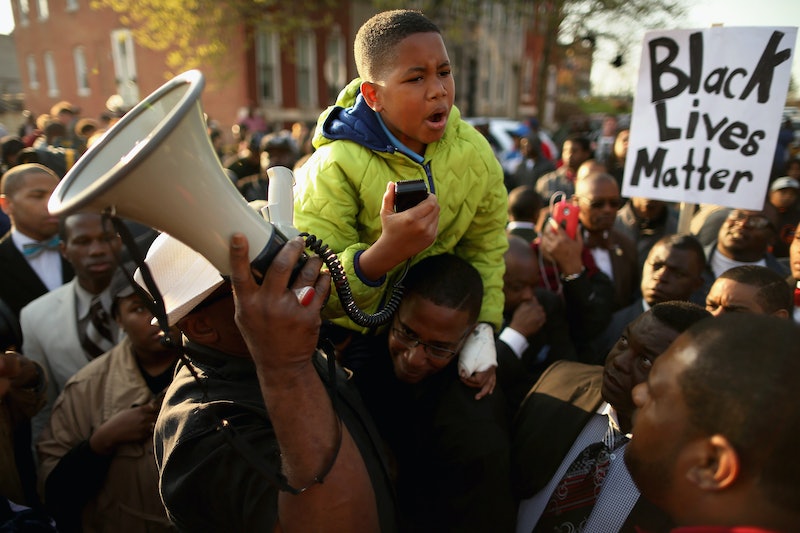 Though the city has captured the public imagination in recent years due to crime shows like The Wire and Homicide: Life On The Street and even the podcast Serial, many of us have a lot of misconceptions about Baltimore: misconceptions that were only furthered this week, when protests over the death of Freddie Gray, who died on April 19 from injuries sustained while in police custody, boiled over into violence. If you're only familiar with Baltimore from its fictional (or sensationalized) representations, it's easy to think of the city as a place where violent crimes "just happen," a modern Wild West where any mass gathering would inevitably turn violent. This kind of thinking is harmful and reductive — and it's also not true.

Baltimore isn't a cartoon city composed solely of drug dealers and sundry other villains. It's a place full of hopeful families, a place full of people trying to live normal lives, a place where economic devastation and ongoing issues with the police have broken down the fabric of many communities. These issues have made Baltimore citizens more vulnerable both to violence from other citizens and violence from police.

The protests in Baltimore this week regarding the death of Freddie Gray didn't come out of nowhere. They didn't happen because Baltimore is a place where violence "just happens." Rather, the Freddie Gray protests express the city's long-standing problems with racism, income inequality, and police brutality.

No matter what you think about the protests, how they escalated, and the police response to them, here are five things that you can't deny the citizens of Baltimore have a right to be dissatisfied about.

Sixty-three percent of Baltimore's population is African-American, and many of the top-ranking city government officials, including Mayor Stephanie Rawlings-Blake and Police Commissioner Anthony Batts, are also African-American.

And it's not just African-American individuals who often find themselves more vulnerable in Baltimore — their very neighborhoods are often at risk. The same Johns Hopkins University study found that primarily African-American neighborhoods in Baltimore were more likely to be disrupted by public work projects like highway construction — forcing residents to find new homes, disrupting neighborhoods, relationships, destabilizing the communities that lived there.

Baltimore has been experiencing a steady population loss for the past 60 years, with a city population of 906,244 in 1970 that dropped to 622,793 in 2014. Though the city saw its first population gains in years in 2013, the overall picture remains fairly bleak: the city lost almost five percent of its entire population between 2000 and 2010, which analysts attribute primarily to poor economic conditions in Baltimore, positing that most of those people moved elsewhere in order to find work.

This population loss gives the city fewer tax dollars to work with, lessening its ability to fund crucial public programs that might help citizens find work or complete their education (only 26.8 percent of Baltimore citizens have a bachelor's degree).

Over 23 percent of Baltimore city residents live below the poverty level, compared to 9.8 percent of the population of Maryland at large, and 15.4 percent of America overall. According to a report by CBS Moneywatch, Baltimore is the sixth poorest city in the nation, with a 10 percent unemployment rate that barely budged during the summer of 2014.

In terms of city budgeting, a shocking amount of Baltimore's money goes into lawsuits related to the city's police force — between 2011 and 2014, the city paid out over $5.7 million in settlements to victims of excessive force from police officers, and spent another $5.8 million defending against these claims in court — bringing the total amount of city money spent dealing with the aftermath of police brutality to more than $11 million over those four years.

Baltimore has long had a reputation as a crime-heavy city, and it is not unwarranted. In 2013, the FBI found Baltimore to have the fifth highest murder rate of any city in the country, despite being the 26th most populous city in the country, with a murder rate of 37.4 per 100,000 people. There were 235 reported murders in Baltimore in 2013, a year when violent crime was down 4.4 percent nationally.

This represents a drop from 1999, when Baltimore had the highest violent crime rate in the country. Yet the city's increased policing has not yielded across the board quality of life improvements for the citizens of Baltimore: in 2005, 108,447 people were arrested. Baltimore only had a population of around 600,000 people that year, meaning that more than 16 percent of the population was arrested. And a 2010 report by the Justice Policy Institute found that two-thirds of the people in Baltimore's jails were there for non-violent offenses.

5. A History of Police Violence

Of course, while all these factors played a role in the public reaction to the death of Freddie Gray, the most relevant factor is likely Baltimore's long history of police officers being charged with utilizing unnecessary force and violently injuring people during arrests.

Since 2011, the city of Baltimore's police department has paid out over $5.7 million to more than 100 people who were arrested in the city. These people claimed that their arrests were marked by police brutality and undue force, and many of those who sued the city said they were violently assaulted by police while being arrested for questionable reasons — including 87-year-old grandmother and foster parent Venus Green, who was injured by police after calling 911 because her grandson had been shot.

A 2014 Baltimore Sun investigation into the city's ongoing problem with police violence found that the nature of the city's settlement agreements prevent the victims from discussing their cases in public — in fact, if those who receive settlements publicly discuss them, they can be forced to return half or more of their settlement to the city.

Because of this, in public meetings where the issue of the city's many, many police violence settlements come up, police reports are used for reference, rather than the eye-witness accounts by the victims. Which means that the city government, rather than the victims of police brutality, get to control the public narrative about what was really happening in Baltimore — even though The Baltimore Sun found that police violence was one of the topics most-mentioned by Baltimore residents during city government public forums in 2014.