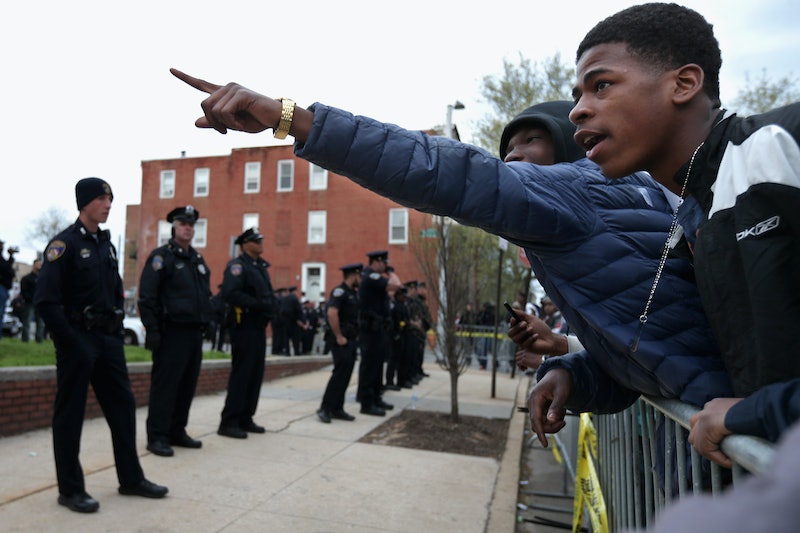 On Monday, what began as peaceful protests devolved into riots in Baltimore after the funeral for Freddie Gray, the 25-year-old man who died after sustaining spinal injuries while in police custody. The violence has the world in both confusion and disappointment: Gray’s own family has spoken out against the riots; and David Simon, creator of the Baltimore-set crime show The Wire (which was based on his book Homicide: A Year on the Killing Streets) decried the riots as “an affront” to Gray’s memory.

Gray’s death, and the violence now occurring in his wake, is indicative of several larger issues like public outrage against police brutality; the "unemployment, poverty and frustration" rampant in cities like Baltimore; and, as Toni Morrison recently commented on, discrimination within the criminal justice system.

And while these issues will never be solved by books alone, there is a collection of literature that can provide background information and insight into what’s going on in Baltimore, and in our country at large. Jill Nelson’s anthology, for example, provides several perspectives on the history of police brutality in America. Antero Pietila’s Not in My Neighborhood recounts Baltimore’s discriminatory practices throughout its history, while Wes Moore and Ta-Nehisi Coates’ memoirs offer personal recollections on growing up black in Charm City.

The violence occurring in Baltimore harkens to incredibly complex, deeply-rooted social and political issues. Hopefully these reads can shed a little bit of light on an unendingly tangled issue.

Although this anthology was published back in 2001, the 12 essays included here offer a dimensional approach to the history, politics, and cultural repercussions of police brutality in the U.S. Among the perspectives provided include a journalist's personal experience with police brutality; a law professor's insights on how black youths are considered differently than white youths in mainstream consciousness; and a history professor's depiction of the Nation of Islam's rocky relationship with the Chicago police.

Kiese Laymon's powerful essay collection manages to do what few autobiographical collections can: it's at once searingly truthful but completely non-indulgent; intensely personal but resonant with a much wider audience; really, horribly sad, but wry and funny and joyful, too. While the topics Laymon touches on vary from overt reflections on being black in this country to analyzing Kanye West, each of these essays are totally brilliant and uniquely American. You can read the title essay over on Gawker, which was initially published during deliberations on the George Zimmerman case.

The Other Wes Moore: One Name, Two Fates by Wes Moore

Wes Moore grew up in Baltimore, just across town from another boy named Wes Moore. But the similarities stopped there: the author is also a Rhodes Scholar, an Army vet, and a White House Fellow; while the other Wes Moore is serving a life sentence in prison for murder. Freakonomics fans will love Moore's memoir/investigation, which recounts how the seemingly simple choices you make result in totally divergent paths — and how, for two disadvantaged men growing up in a disadvantaged city, those choices mean the difference between a life of success and a life in prison.

Not in My Neighborhood: How Bigotry Shaped a Great American City by Antero Pietila

In this social history, Pietila traces Baltimore's roots back to the late 19th century, examining how its deep-seated discriminatory practices toward minorities has indelibly shaped the city's modern terrain. It doesn't claim to answer for Baltimore's troubled history (or present), but it illuminates on how a city's closed-minded foundation begets future tensions.

The Beautiful Struggle by Ta-Nehisi Coates

Coates' memoir is both an ode to his father, Paul — a Vietnam vet, a friend to the Black Panthers, an entrepreneur, and his children's most powerful advocate — as well as a reflection on growing up in the face of adversity. Doesn't matter whether you can personally relate to Coates' childhood in Baltimore or not: the writer's graceful recollections of his difficult formative years will resonate with everyone who has ever navigated those years; and, above all, with anyone who has ever loved a parent with the same fierceness as does Coates.

Cop in the Hood: My Year Policing Baltimore's Eastern District by Peter Moskos

Peter Moskos, a Harvard-educated sociologist, took on a dangerous project: to become a cop in Baltimore's crime-ridden Eastern District. Here, Moskos recounts what he learned in the police academy and on the streets; which is, essentially, that what's learned in the classroom doesn't always prepare a new cop for the harsh realities of the midnight shift.

The New Jim Crow: Mass Incarceration in the Age of Color Blindness by Michelle Alexander

This #1 Amazon Best Seller secured that spot for a reason. In this thoroughly researched, cleanly conveyed book, Alexander, a legal scholar, argues that "we have not ended racial caste in America; we have merely redesigned it." The writer targets the judicial system as the arbiter of this "New Jim Crow" era, laying bare its rabid mistreatment of minorities, especially black men. The New Jim Crow offers a profoundly candid look at our country's fatal shortcomings. It's relevant reading, now more than ever.