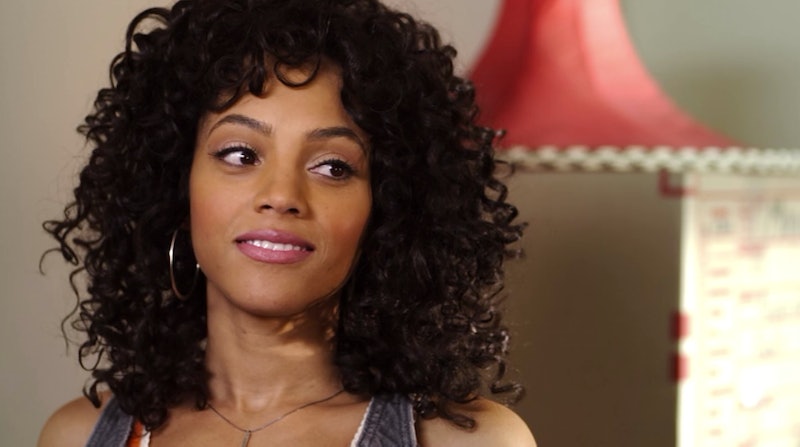 There are absolutely no shortage of theories when it comes to Pretty Little Liars Season 6. So whenever a new addition to the Rosewood crew gets brought in, one can't help but instantly sit up and take notice. Such is the case for Titus Makin Jr., who is the latest to join the PLL cast, which show writer Jonell Lennon made public in a tweet just last week. And while Lennon has done nothing more than describe Makin's character as being "a handsome new face around Rosewood," speculation has already begun regarding what part he'll play in the upcoming season. Like the fact that his presence could lead to further proof that Maya is actually alive and well. But let's back up for a minute here, so I can allow myself to explain my method to all this madness.

According to Wet Paint, who recently got their hands on Makin's audition tape, the actor tried out for the role of Lorenzo — a character who will spend quite a bit of time getting cozy with Alison. And you'll never guess where their first initial run-in will be: at church! (Not really the first place you'd expect to find Alison, but color me intrigued.) It's unclear what exactly their relationship will entail, though, Alison will apparently make her new acquaintance promise to not let anyone else know that he saw her there. So, you know, typical Liar behavior.

However, in not one, but two surprise twists, Lorenzo also appears to be a cop assigned to watching over Alison and persuades her to become a fellow youth group leader at church. (Say what?!?!) Basically, this guy has multiple jobs and all roads seem to lead to Miss DiLaurentis. But why? Clearly, there's more to this character than meets the eye. And I've learned to never trust a new face in Rosewood. (Or really any face in Rosewood, actually.) Which brings me back to Maya.

Rumors and theories have spread like wildfire this year in regards to Maya's alleged death. The fact that we did not actually see a body makes the possibility of her potential resurrection seem all the more likely. And now that this new character is being brought into the mix, I can't help but wonder if he shares significant ties to Emily's former flame.

Granted, Lorenzo isn't a name I've heard on the PLL radar before, but on a show where people have multiple identities (looking at you Charles!), I'd say it's safe to assume that this guy could pretty much be anyone. Perhaps he's an actual relative of Maya's (and not the super-stalky Lyndon James fake-out kind), who is either helping her to remain in hiding while she plots her revenge Amanda Clarke-style, or he truly believes she is dead and has vowed to get to the bottom of what happened to her as well as who's really responsible.

Initially, I was inclined to think that maybe he could be her original boyfriend, Justin, who we heard her make reference to with Emily back in the PLL pilot. But after going back and re-watching that scene, it appears that the two guys look nothing alike, even at a far off distance in a picture frame. So maybe the whole relative thing is more likely.

Of course, that's not to say that Justin and Lyndon are the only former beaus in Maya's life. Truth be told, we still know very little about her life outside of her romance with Emily. Who knows what other kind of characters she could have consorted with over at True North. She and Lorenzo might have met and concocted a plan to bring Alison down from the inside out, thus explaining why he's placing himself at the forefront of Alison's life.

I mean, it's not like this show hasn't had its fair share of dirty cops already. He could be using it as a cover to infiltrate the town and to help bring Maya's killer (or even attempted killer) to justice. Because even though Lyndon was the one supposedly responsible, it'd be naive to think that Alison didn't have a hand in all of this as well. (When doesn't she, really?) Maya was living in her house, after all. Who knows what she discovered while residing there.

Mind you, it's still hard to say how much of Makin's audition script will make it into the final cut. (Things tend to change as the writing progresses.) But given what we know thus far, I'd say his character will definitely be someone worth keeping an eye on and could lead us down the path of an Emily/Maya reunion. Prepare your 'shipping freak-outs accordingly. (*fingers crossed*)