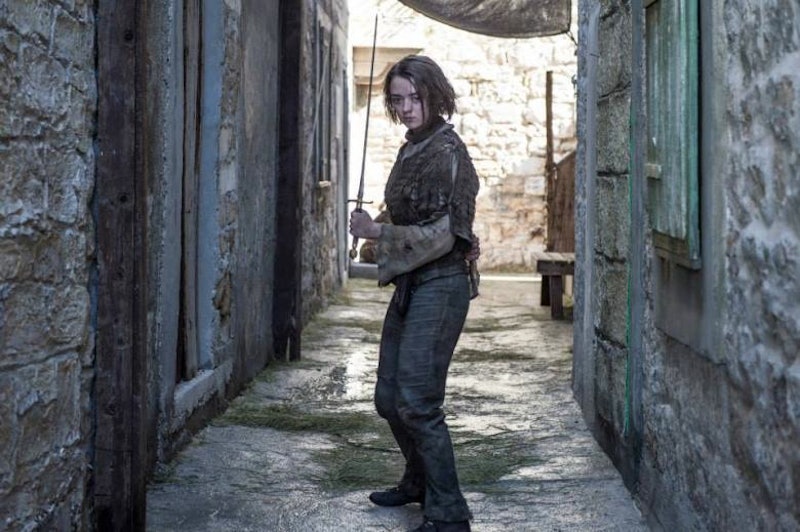 It's hard out here for an Arya. Obviously there's clamor to declare who Westeros' ultimate feminist hero is, and usually Daenerys comes out on top — but I would a make strong case for our good friend Arya Stark, who has really been dealt a terrible set of cards and is making more than the best of it. You know what they say: When life gives you lemons, make Mike's Hard Lemonade. Over the course of the past four seasons — and in the beginning of Season 5 — Arya has proved time and again that no matter where you're coming from, you always have some place to go — so you better get going.

(Before we move forward, it's worth noting that this post will do kindly not to spoil the most recent episode of Game Of Thrones, "The High Sparrow," which was an Arya-extravaganza, so don't worry if you're not up to date just yet.)

Beyond her incomparable quick wit that she wields to intimidate men and brutes nearly four times her size (looking at you, Hound), Arya's impressive for her tenacity and her ability to endure an endless slog of terribleness that comes her way. It goes without saying that "childhood" in Westeros is far from idyllic, unless you're Robin Arryn or, like, Joffrey "The Nitwit" Baratheon.

Arya's path is certainly forging itself onward in a unique way — we last left her at the House of Black and White in Braavos. But should she want to pursue some other career path in years to come, she should throw 'life coach' into the mix, because we've all got A LOT to learn from her.

You can go your own way

We now know we must cherish the few moments we got to see between the late Lord Eddard Stark and his youngest daughter Arya. When discussing what she wants to be when she grows up, she asks old dad Ned, "Can I be a lord?"

As fans know, Ned responds with, "you will marry a lord," and Arya claps back with "No, that's not me." And good on her! Especially considering she lives in a kingdom where it really seems there are only a handful of options for women to succeed, and most of them are bad, boring, or dangerous.

Let 'em think what they want

Don't keep sweatin' what I do, cause I'm gonna be just fine.

Stick 'em with the pointy end

The best advice from Arya's broski, Jon Snow, when he gifted her with Needle — stick 'em with the pointy end! Literally! Figuratively! Do not play nice because that means you're gonna make a victim of yourself — always come correct with your offense and your defense.

If you don't fear death, you can do anything

This day, or any day.

Keep that philosophy on point

It's hard enough being a woman in your twenties, and especially in this economy. There are options, though: you can succumb to how damn exhausting life is, or you can arm yourself with some Arya edge. When a dying man tells her that "Nothing can be worse than this," she says "Nothing is just nothing." Sounds bleak, but isn't it freeing?

It's OK to laugh

Life truly is chaotic, absurd, and often times with no justice. So when the Hound and Arya finally roll up to the Vale just to find out Aunt Lysa is really most sincerely dead, Arya can't help but laugh. Because laughing is MUCH better than crying — and isn't life funny, even when it's the pits?

Much like a burn book, or Harriet the Spy's diary, Arya knows the importance of kicking ass, taking names, and later killing those asses. We shouldn't murder — that's a given, I hope — but Arya teaches us that sometimes forgiving and forgetting is the more dangerous route. Keep receipts of the people who have burned you so you can reference them later.

Trust your gut, and show them who's boss

All men must die

Truuuuuuu. (But we're not men, right?)

More like this
The 'PLL: Original Sin' Season Finale Finally Revealed A’s Identity
By Alyssa Lapid and Kadin Burnett
‘The Simpsons’ Will *Finally* Address How They “Predict The Future”
By Sam Ramsden
'The Sandman’s Ending Is A Departure From Neil Gaiman’s Comic Book Series
By Kadin Burnett
The Bestselling Novel 'The Doll Factory' Will Be Adapted Into Thrilling TV Series
By Catharina Cheung
Get Even More From Bustle — Sign Up For The Newsletter