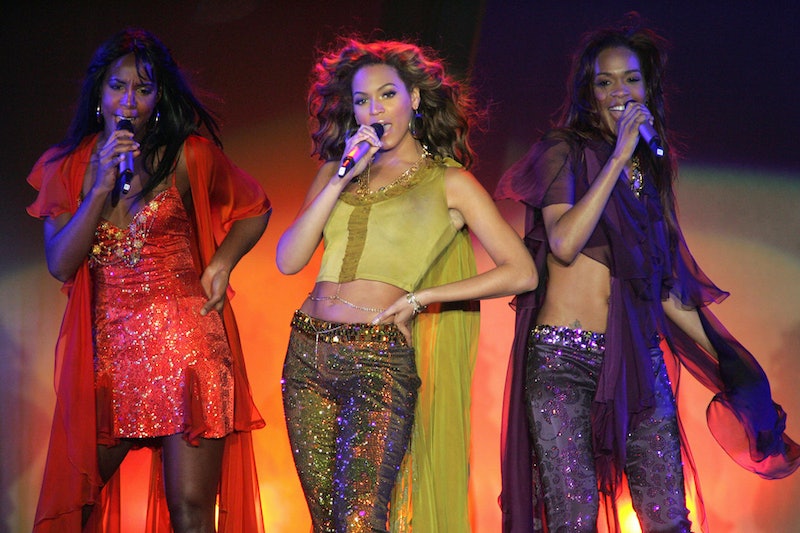 As I've grown up, I’ve realized that one of the most beautiful parts of aging is the nostalgia that comes with it. Though the bittersweet pain of looking back on something you loved and knowing that you’ll never experience it in that same way again can be tough, nostalgia has its benefits — and one such benefit is understanding the complexity of things you loved but didn’t fully comprehend as a kid. For example, I’ve recently realized that many of the songs I loved as a kid are pretty inspiring for women — in fact, there are quite a few empowering songs from the ‘90s and early ‘00s.

When I was a kid, I remember making fun of my parents for listening almost exclusively to the music they liked when they were younger rather than getting to know current music. I now regret those jabs at my parents, because I have come to accept the fact that when I'm in my forties, I will force my kids to listen to Nelly and Britney Spears on road trips — because a childhood without Britney is not a childhood worth living, in my opinion. But I digress.

The ‘90s and early ‘00s were a great time to be alive and, especially after realizing how many of my favorite songs as a kid were actually boasting powerful messages of female empowerment, I now see no need to expand my musical tastes much past the songs of my childhood. Check out these songs of female empowerment from the ‘90s and ‘00s and perhaps you’ll agree with me.

I remember loving this song as a kid but I didn't realize how much of a girl power jam this was until I listened to it again recently. If you can get past Christina's horrifying eyebrows, you will almost certainly be empowered by her lyrics which expose the double standards of gender that have long plagued society, with lines like, "If you look back in history/It's a common double standard of society/The guy gets all the glory the more he can score/While the girl can do the same and yet you call her a whore." "Can't Hold Us Down" never fails to get me pumped up about being a woman and fighting against gender inequality, and I bet it will have a similar effect on you.

"None Of Your Business" was all about sexual liberation and the right for women to do what they want without being criticized. This was the proverbial "haters gonna hate" song of the '90s, and it encouraged women to flip the bird to gender double standards.

"Just A Girl" was all about taking gender stereotypes to task. The song was full of lyrics that pointed out the absurdity of stereotyping women and limiting what they could do simply because of their gender. For example:

I'm just a girl in the world... That's all that you'll let me be! I'm just a girl, living in captivity Your rule of thumb Makes me worry some

"Just A Girl" is the perfect girl power anthem and will make you remember why you love Gwen Stefani (as if you could forget).

"Bitch" is one of those words that women have been trying to reclaim and reappropriate for ages. We want to make it our own, and take the power away from those who try to use it against us as an insult. Meredith Brooks' "Bitch" is one such example of a woman making 'bitch' her own, as the song embraced and celebrated the multi-faceted, complex nature of what it means to be a woman.

"Unpretty" was the first song I was exposed to as a child that reminded me that inner beauty is far more important than outer beauty. Though this was a message my parents taught me from an early age, this song was the first time I remember hearing such a positive message in popular music. The song reminds women that your happiness with yourself and your body starts within you, not with the opinions of others.

"Stronger" tells the tale of a post-breakup Britney who realizes she's better off on her own than with the jerk she was dating. With lyrics like, "I've had enough/I'm not your property as from today, baby/You might think that I won't make it on my own/ But now I'm stronger," Britney is reminding girls everywhere that you don't need a man to be happy with yourself and the struggles you go through only make you tougher in the end.

Before Beyoncé was our feminist queen, she was a part of Destiny's Child. And thankfully, even back in her Destiny's Child days, Beyoncé and co. were pretty consistently giving us images of strong, independent females to look up to. "Independent Women, Part I" highlighted the importance of independence for women both in and out of relationships. "Independent Women, Part I" encourages ladies to be fiscally independent and not put up with men who try to control them.