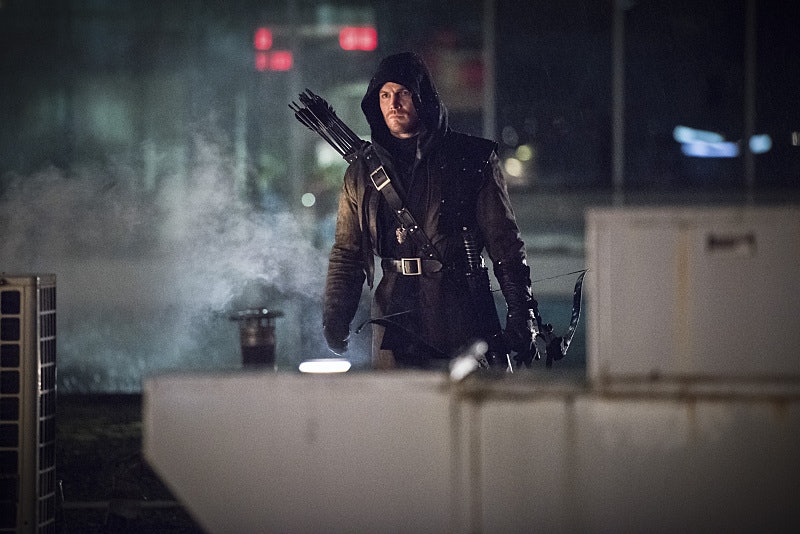 A week ago if you had asked me what I thought about Oliver Queen joining the League of Assassins on Arrow, I would have been like, "nah, that's crazy talk, Ollie would never do that." Well, I was wrong. Oliver did just that. In a bid to save Thea, and to save his city, he assumes the role as the next head of the League. It might seem like it's a permanent spot for Oliver, but he can't stay there forever, can he? He has to go back to Starling City eventually. Exactly how long will Oliver stay with the League?

The answer to that lies with just how long Oliver will stay away from Starling City. Arrow has always been about Oliver trying to make his city a better place, and even though he's got a scary new job title, he still cares deeply about his home. The focus of Arrow can't suddenly shift to Oliver hanging out in Nanda Parbat, doing League-related things. Honestly, that doesn't sound too exciting. Also, there would be no Felicity Smoak, so it'd be really boring.

The problem is, Oliver has now sworn his allegiance to the League, so it won't be an easy thing to wiggle away from. He has duties and responsibilities to the League now, and if he wavers from them, it's likely that Ra's will go after everyone Oliver loves and we can't deal with Thea being stabbed again. Oliver must show his allegiance to the League, so at least for right now, he can't go rushing back to Starling City. But a transformation is slowly happening to Oliver, and when he does return home, he won't be the same anymore. Arrow might not focus on saving Starling City for these last few episodes, it might focus on saving Oliver.

While Oliver finds himself back in Starling City in Wednesday's "Al Sah-Him," as shown in the preview above, he won't be back in the city for good, or for good reasons. Nyssa al Ghul is still in Starling City, and Oliver has a bone to pick with her. He returns, but instead of showing up in the city to help Felicity, Diggle, and Laurel, as executive producer Mark Guggenheim told TVLine, Oliver's now "the villain of the week.” That doesn't bode so well for him leaving the League anytime soon.

Following Wednesday's episode, there are only two more before the Arrow season finale. The folks behind Arrow are building towards something, but just what we don't know yet. "Usually [the finale] puts Starling City in the crosshairs in some way, shape or form,” as Guggenheim explained to Entertainment Weekly. But this season finale might be a little bit different, considering earlier this season, they, as Guggenheim put it, "blew up the show, so it just stands to reason that episodes 21-23 [will] be very unconventional, certainly in regards to Diggle, Oliver and Felicity.”

This all points to Oliver's decision about whether to stay in or leave the League. That's been the big story throughout this season, and we'll probably finally get a true will-he-won't-he resolution in the finale. This time around, it isn't so much Starling City that will need to be saved in the finale, but rather Oliver. He might see it as a good decision to stick with the League — to protect everyone else, of course — but they all see it as bad. Now instead of saving a bunch of people, it might end up being Felicity, Diggle, and Laurel just trying to save one: Oliver.

More like this
Does 'Locke & Key’s Ending Mean There Could Be A Season 4?
By Sophia Moore
Here’s When 'She-Hulk' Takes Place In The MCU
By Brad Witter
How Marvel’s 'She-Hulk' Changes Her Comic Book Origin Story
By Brad Witter
The 'PLL: Original Sin' Season Finale Finally Revealed A’s Identity
By Alyssa Lapid and Kadin Burnett
Get Even More From Bustle — Sign Up For The Newsletter