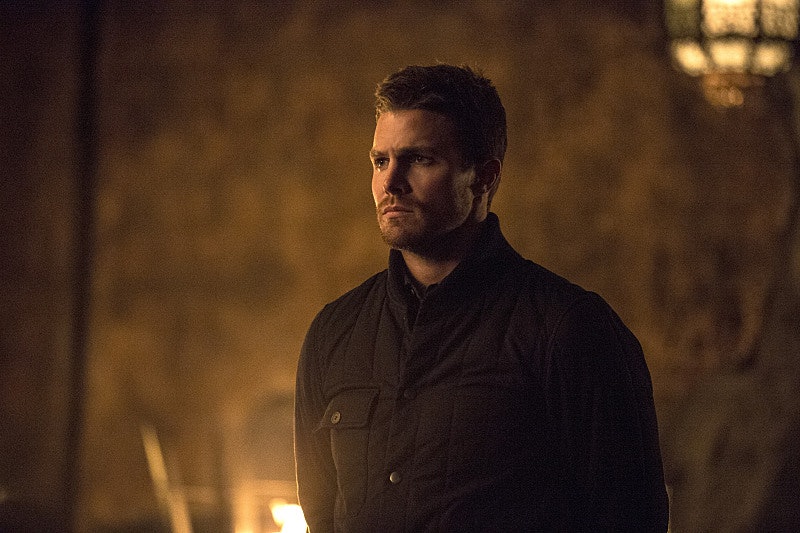 If you were hoping for a phenomenal episode from Arrow this week, then there's no doubt that "The Fallen" did not leave you disappointed. As if that Olicity sex scene alone wasn't enough to satisfy your expectations, Stephen Amell also delivered what has to be one of the strongest performances of his acting career to date and provided a whole new depth to Oliver's normally stoic personality. And that's, in large part, what made the ending such a bittersweet pill to swallow. Because Oliver has officially joined the League of Assassins. That's right, folks. In exchange for access to the Lazarus Pit in order to save Thea's life, Oliver agreed to become Al Sah-him, Heir to the Demon.

So what exactly does that mean? Well, according to Ra's al Ghul, it means that the Oliver Queen we've come to know and love, is dead. Not physically dead like he (almost) was during his wintery mountain top visit to Nanda Parbat. But more in the figurative sense. That part of his identity is now gone and in it's place will be… what, exactly? We know that Ra's is gearing up to train him to be his predecessor. However, it remains unclear how this will end up altering Oliver's personality and place among this Arrow ensemble. Will he really become a lethal killer like Ra's or is he simply biding his time and has a bigger end game up his sleeve?

Personally, I have to believe in the latter. There's just no way this show can continue with Oliver in one place and Team Arrow in another. It just doesn't work like that. There has to be a way for Oliver to return to Starling City without fearing Ra's wrath. The only other outcome I can see other than an escape plan would be to make Oliver the new big bad villain of the series. I mean, being called anything that has the word "demon" in the title isn't exactly the most positive form of PR in the world. Is it possible that Oliver will be transformed into a bad guy that his friends will have to take down?

It certainly would make for an interesting plot twist, though I hate the thought of Diggle and Oliver fighting on opposing sides. (Think of the bromance, writers!) There has to be a way out of this and to get our Emerald Archer back into that green garb we've come to love. I guess we'll just have to wait and see how it all unfolds.

In the meantime though, I hope he thought to pack the salmon ladder. After all, just because he went and got a new job doesn't mean he should start slacking on his exercise regime. That six-pack isn't going to just sculpt itself.