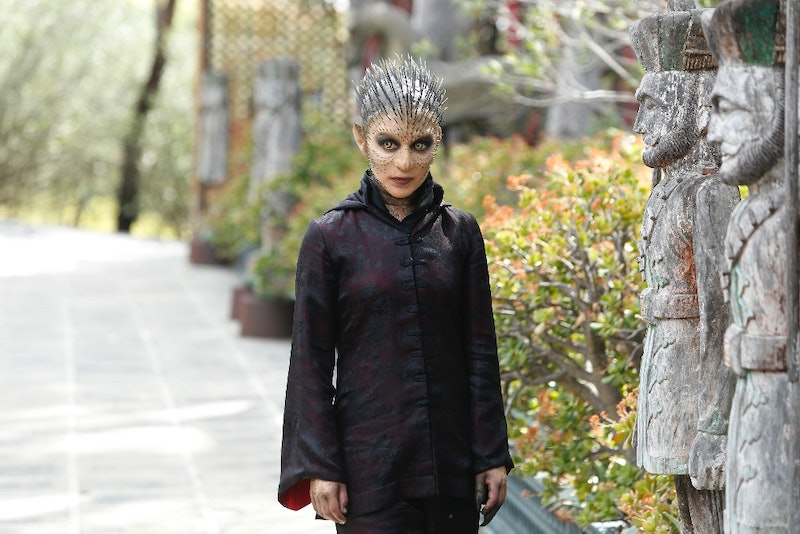 The early reviews are in for the latest Marvel movie, and I know one fictional character who is not amused. At the end of Agents of S.H.I.E.L.D. Raina saw images from Avengers: Age Of Ultron of Loki's scepter, terrible destruction, "metal men" and "consequences" that seemed to really frighten her. I'm not joking! We recently learned that Raina, formerly known as The Girl In The Flower Dress, has the Inhuman ability to see the immediate future. Since this episode of Agents of S.H.I.E.L.D. leads into the events of Age of Ultron , it's as if she watched the movie before us.

I think it's also important that what started as dreams for Raina became visions. The episode opened with one of her dreams, foreshadowing Gordon's injury and Skye using her power to bring Lincoln back to life (possibly with some help from his electrical powers). However, the next visions came to Raina while she was wide awake. She talked about metal men taking over cities, immediately calling to mind Ultron's attack in the Avengers' trailer. This scene overtook her, like a seizure. Does this mean that Raina will ultimately be able to control and guide her own visions?

It's a good thing she got that vision at that time, in a way. Raina looked like she was just about to attack Jiaying and take over the Inhuman compound. I get that Raina is jealous of Skye and her parents, but that's a little much! The way Raina was walking around Afterlife and telling stories to the potentials was a little bit inspiring after all she has suffered, but slightly threatening at the same time. Even Cal said that she needed to be watched. The gift of foresight is very powerful, and in the hands of someone as manipulative as Raina could lead to a coup d'etat before the season is over.

Next week's episode is titled "Scars." It's no surprise that a movie with superheroes will leave a lot of destruction. However, I'm curious to see what specifically scared Raina so much, and with Avengers: Age of Ultron opening in theaters on Friday, we won't even have to wait a week to find out!