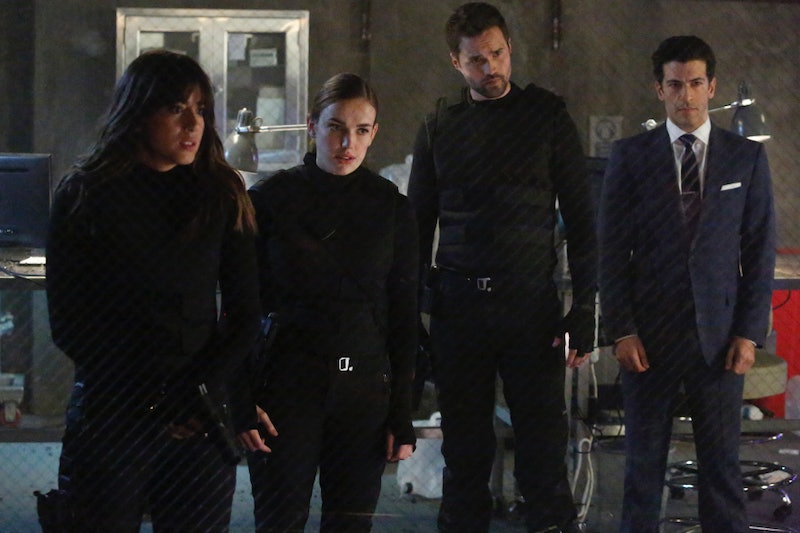 One of the most anticipated premieres of the 2013-'14 television season, Marvel's Agents Of S.H.I.E.L.D. arrived on ABC as the first small-screen extension of the Marvel Cinematic Universe. After a whiz-bang pilot written and directed by Joss Whedon, the series coasted for most of its first season on good will, slowly dwindling from a must-see TV event to an entertaining diversion for only the most hardcore of Marvel fans. That all changed with the theatrical release of Captain America: The Winter Soldier, which dramatically shook up the MCU by dismantling S.H.I.E.L.D. itself. This twist revitalized the ABC show, causing an uptick in ratings and critical acclaim alike... so surely showrunners Jed Whedon and Maurissa Tancharoen won't be ignoring the much-hyped release of the upcoming Avengers sequel, in theaters this Friday. The only question that remains is: Will this week's Agents of S.H.I.E.L.D. foreshadow the events of Avengers: Age Of Ultron ?

The three episodes that follow Ultron — next week's "Scars" and the May 12 two-hour Season 2 finale — will undoubtedly deal with the ramifications of the Avengers' second team-up, the same way S.H.I.E.L.D. wove the events of Winter Soldier into its Season 1 tapestry. But will this Tuesday's episode, titled "The Dirty Half Dozen," continue to kill time until Ultron hits theaters, or will it somehow herald the events of that film?

The hour, which borrows its name from the famous 1967 WWII movie, will find Coulson's S.H.I.E.L.D. and the "real" S.H.I.E.L.D. joining forces for the first time. The episode synopsis states, "Gonzales and Coulson must find a way to put their differences aside and work together against Hydra, even if it means teaming up with someone they don't trust." Anytime you see the word "Hydra" in a press release, you know that episode is going to be directly tied to the greater MCU mythology... seeing as how that nefarious Nazi organization is what caused the downfall of S.H.I.E.L.D. in the first place.

Keen-eared viewers will have heard a name mentioned several times throughout the season that suggests an impending connection to Ultron. In last week's episode, "The Frenemy Of My Enemy," Coulson and Ward teamed up to use a brainwashed Sunil Bakshi to locate the news heads of Hydra, Dr. List... and Baron Von Strucker. Wolfgang Von Strucker was introduced to the MCU during Winter Soldier 's mid-credits scene, played by Thomas Kretschmann. In that brief teaser, he was seen in possession of Loki's scepter and referencing experiments that only yielded two survivors: "The Twins," Pietro and Wanda Maximoff.

The Maximoff siblings, also known as Quicksilver and Scarlet Witch, along with Von Strucker, will all have roles in Ultron. So S.H.I.E.L.D.'s repeated references to the Hydra baddie certainly imply a connection of some sort. But just what is that connection? (Spoiler alert for those who want to know absolutely nothing about Age Of Ultron!) According to Joss Whedon's interview with Empire Magazine, the film opens with what he calls "a pre-credit [James] Bondian blow-out" featuring "the Italian alps," a "castle," and "soldiers in winter camo." That appears to be the sequence that can be glimpsed in the trailer with the heroes battling through a snowy forest.

Advance reports claim this sequence is an assault on Von Strucker's base; the same place where he's holding the Maximoff twins. These reports seem to be confirmed by this clip featuring Hawkeye encountering Quicksilver during the attack. (End Ultron spoilers!) With Coulson & Co. continuing on their quest to find Von Strucker this week, could they be the ones who hand his location over to the Avengers, neatly setting up the opening of the film? It certainly seems like that's how events are shaping up — especially since Cobie Smulders will be reprising her cameo as Agent Maria Hill in the episode. Coulson will likely pass the intel along to her, who will bring it to Fury and his team of superpowered misfits.

Oh — and who are the half dozen the title refers to? Why, none other than the show's original team of six: Coulson, Skye, May, Ward, Fitz, and Simmons. Watch the hyper-dysfunctional group meet up for the first time since Season 1 in this clip from the episode.