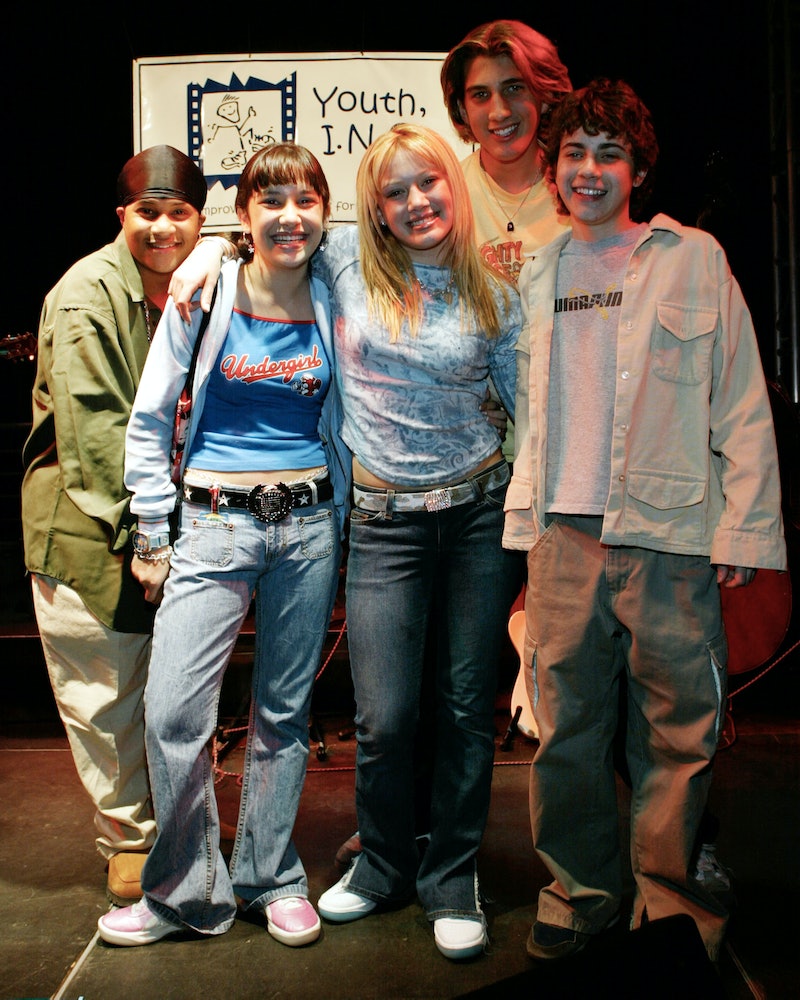 For many preteens and some teenagers growing up in the early 2000s, the show Lizzie McGuire was an absolute staple to watch. Young 20-something women today might still feel secondhand embarrassment about Lizzie demanding that her mom buy her a bra. They might still not be over the wrath of mean girl Kate. And they might still have all the feelings when Lizzie and her best guy friend Gordo finally kissed in the movie. So maybe that's why everyone freaked out when some of the show's main stars Hilary Duff, Jake Thomas, and LaLaine had a mini reunion on April 28.Of course, some themes explored in Lizzie McGuire, such as the importance of friendship and family, falling in and out of love for the first time, and navigating the cliques of middle school, are still relevant today. After all, those topics are timeless and any preteen at any time could relate. But it cannot be denied that some references would probably be lost on the younger generation watching today, or maybe just laughable. (After all, what young person asks their peers for their email address anymore?)

So it's fitting that those of us who grew up with the show can have a look back and a laugh at some of the most typically early '00s moments. Check out the round up below! And let's hope this potential full-on Lizzie McGuire reunion that Hilary Duff has been talking about will actually be a thing!

Mean girl Kate was actually the worst. But you can't say that she wasn't up to date on the latest technology trends — and the insults that accompanied them.

And subsequently broke countless teenage girls' hearts. By the way, who wants to bet that Aaron Carter still watches this GIF on repeat?

The Outfit Debate That Puts #TheDress To Shame

There was no debating over what color this outfit was. It was all too clear — bright orange tank, zebra striped skirt. You won't see an outfit like this anymore. But of course, there was a debate. After all, it was Picture Day at school, for crying out loud. Understandably, it wasn't pretty.

The sunglasses shape, the jacket, and the HEADBAND are the things of early '00s girls dreams when they're on a mission.

Honestly, how could you say no to this not-so-rhetorical question, though? Especially in the early aughts. Spears was the it girl. And now she's a legend.

Singing Into A Hairbrush

Remember when this was an essential montage for teen movies?

It's almost like they knew denim on denim would be big years later! They might have been considered uncool at school, but they were actually just ahead of the curve. But we fans knew that already.