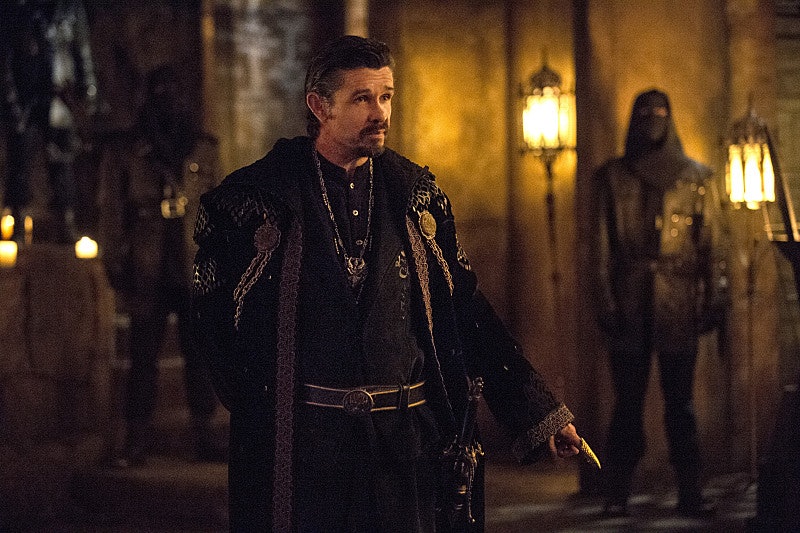 We knew that it would be difficult adjusting to Oliver's new identity as Al Sah-Him. What we didn't expect was that, in the process, we'd learn about a new Arrow villain known as Damian Dark. Who is this brand new foe, you may ask? Well, according to Wednesday night's episode "Al Sah-Him," he has a long-standing history with Ra's al Ghul. Apparently, back before Ra's became… well… Ra's, Damian thought he was the true Heir to the Demon. But given that it's not allowed for there to be two warriors vying for the honor, Ra's was supposed to eliminate the competition.

But Ra's hesitated, and as a result Damian was able to escape. Since then, he's continued to carry out the League's ways, but with using his own agenda as a beacon. Apparently he even had a hand in Malcolm's whole earthquake device debacle and countless of other tragic events. (Basically, he's bad news, is what I'm trying to say.) And he continues to haunt Ra's even to this very day. We didn't catch a glimpse of this Damian character since the description went no further than just words… at least for now. But I doubt that's the last time he'll be mentioned. In fact, Damian could very well be the driving force that Oliver faces throughout Season 4.

In the meantime, though, he remains a bit of mystery. However, those of you who are familiar with the D.C. Comics know of Damian's existence, though there the spelling is a bit different since he goes by Damien Darhk. In the books, he possesses genius-level intellect and is a member of the evil organization H.I.V.E., which we know will play a bigger role in Arrow's future, making this little twist tie in quite nicely. If you recall, the group was responsible for the death of Diggle's brother, along with thousands of other villainous acts, so it's sure to present a challenge for Team Arrow to take on. (Though we know they can totally do it.)

Of course, it's always hard to know how similar Arrow characters will be to their D.C. counterparts, but rest assured that Damian and H.I.V.E. are linked in a very big way. If I were you, I'd expect him to be dropping by Starling City in the very near future.