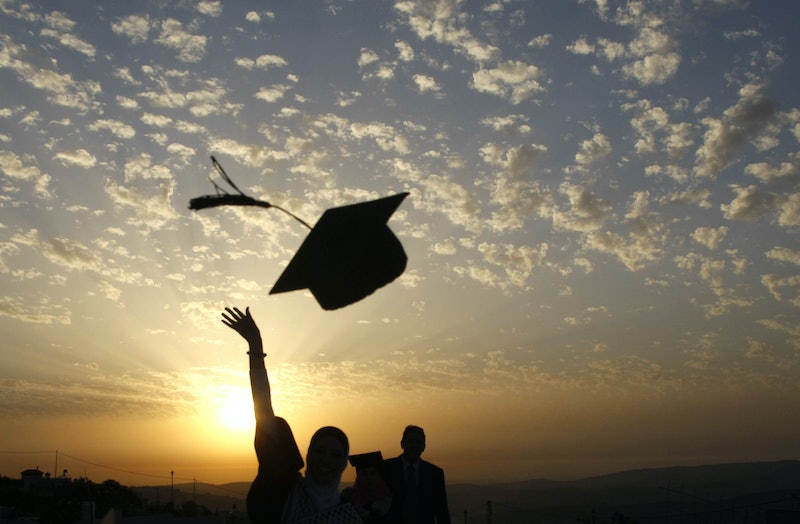 If you're about to walk across a stage and flip a tassel, your reading list just got longer... because trust me, you need these 11 books for graduates. Graduation is exciting, of course, but it can be completely terrifying, too. You're leaving the campus you've called home for four years, the friends you've made into family, and you've going to be off on your own — in the dreaded Real World — way sooner than you're comfortable with.

You might be looking for your first job, or taking on any number of exciting projects of your own. The possibilities are vast and intimidating, but you're never alone when you graduate. In The Opposite of Loneliness, Marina Keegan puts these feelings into words: “What we have to remember is that we can still do anything. We can change our minds. We can start over.” From graduation to far later in life, what you do now is just the beginning.

So, whether you have a five-year plan laid out like a map in front of you, or you're just going with the flow until you find something that works, the possibilities are there. But, don't be afraid to get a little lost along the way. If you do, here are 11 books for graduates that will help you find your way back, or at the very least, help you feel just a little less alone. Oh, and congratulations, by the way.

If there's one person who can inspire you to live your best life after graduation and beyond, it's J.K. Rowling. This magical speech was originally delivered to the Harvard Class of 2008, but since we can't all go to Harvard, Little, Brown released it in book form. With inspiring quotes, and images to accompany them, this is one small book with a big message, and it deserves a spot on any graduate's shelf.

Amy Poehler is probably one of the funniest and most down to earth celebrities we have. She's also majorly inspiring, feminist, and motivational in her memoir, Yes Please. From post-college jobs, to making it big in comedy, to being a woman, Amy has a word of advice for all of us, and will make you laugh along the way.

Don't Worry, It Gets Worse by Alida Nugent

Alida Nugent didn't know what to expect from her post-grad life, but she definitely wasn't prepared for what was waiting for her. If you have no idea what you're doing after graduation, it's okay, you're in the same boat with countless other floundering twenty-somethings. Nugent documented her own tentative steps, so you won't have to feel alone while you figure things out!

The Opposite of Loneliness

Easily the most heartbreaking book on this list, The Opposite of Loneliness is the title of the viral article made famous by the death of its author, 22-year-old Marina Keegan. Keegan was killed in a car accident just after her graduation from Yale in 2012. Before that, though, she wrote some of the most beautifully worded essays and stories on graduation, life, and everything in between. A book I wish I could hand to every graduate and young woman out there, The Opposite of Loneliness is a must-read.

Congratulations, By the Way by George Saunders

Much like Rowling's Very Good Lives, Congratulations, by the Way was originally written as a speech. It was the graduation George Saunders gave to Syracuse University, and was so well received that it was published in book form. Since it was given, the speech has been shared millions of times, and is the perfect token of wisdom to read as a graduate yourself, or give to someone as a graduation gift.

Creator and founder of the now famous retailer Nasty Gal, Sophia Amoruso knows a thing or two about going after your goals and making things happen for yourself. That's not to say that her road to success was well-paved, however; she worked the same tedious, boring jobs we all find ourselves in while we pursue our dreams. Amoruso will inspire you to not just do what you love, but to become your own #Girlboss.

What Do You Do With An Idea? by Kobi Yamada

I know what you might be thinking: A children's book? But this isn't just any kids' book. What Do You Do With An Idea is the perfect reminder for children and graduates alike that your ideas and thoughts can change the world. You just have to have the courage to see them through!

The Myth of Happiness by Sonja Lyubomirsky

Growing up, you'll probably realize pretty quickly that you don't always find happiness or enjoyment in the exact same things everyone else does. That's a good thing. Sonja Lyubomirsky give you the science of exactly why that is in her book The Myth of Happiness. Your life is going to take all kinds of turns after your graduate, learn to follow your happiness where it leads you!

Headstrong: 52 Women Who Changed Science and the World by Rachel Swaby

If you ever feel like what you're doing doesn't matter, take a look through Rachel Swaby's compilation of amazing women changing the world: Headstrong: 52 Women Who Changed Science — and the World. It's full of some of the biggest and best minds science has ever seen, and they weren't always sure of themselves, either.

Our lives are full to bursting with things that have the potential to distract us. I mean, we need a Do Not Disturb setting to stop us from compulsively grabbing for our phones the minute they light up! Ed Catmull looks at all of the forces that have the potential to stand between you and the inspiration you might need to do something incredible. This one will have you itching to get out and get creative the minute you close the back cover.

This one has likely followed you from kindergarten graduation through high school, and now here I am again, arm outstretched, offering up our favorite Doctor. But Oh, the Places You'll Go! carries the same weight — if not more so — as it did when you were a kid: "You're off to Great Places! Today is your day! Your mountain is waiting, so... get on your way!”