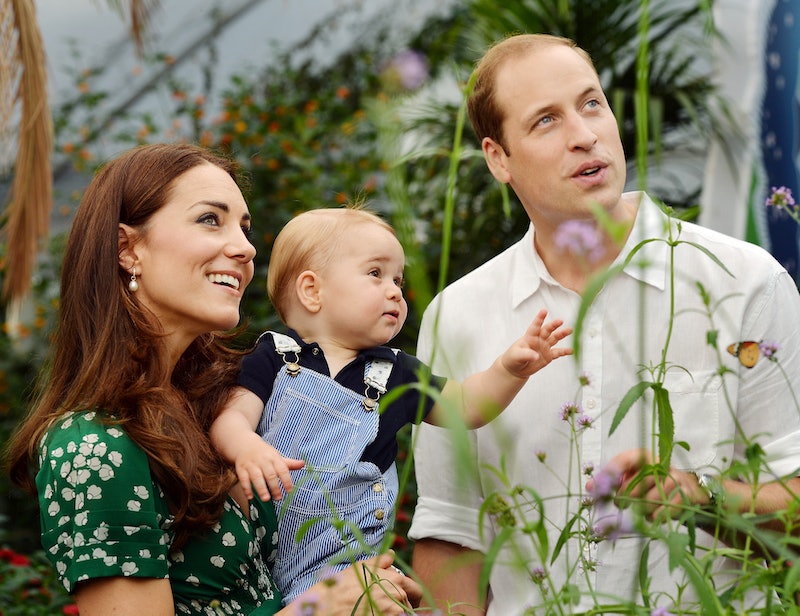 While all eyes are the Royal Family again now that Kate Middleton has given birth to her second child with Prince William. Reportedly, the Duchess of Cambridge had a baby girl on Saturday, May 2 at 8:34 a.m. British Summer Time. As all toddlers do when they have a new sibling born, Prince George of Cambridge is probably sitting at home wondering how to become a good big brother. (OK, he is probably at home settling down for nap time, but even royal toddlers can get stressed.) Adjusting to having a sibling is tough enough for any child, but factor in a royal throne and your family being watched by the entire world, and that is what little George is now taking on... at not even two years old.

Getting a younger sister means sharing many things the first time: your toys, your home, and even your parents. Even if you are a future king with an entire country to share, the adjustment period can be tough. You don't understand why you're not getting the attention, you wonder why your new sister can't play the games you want to play, and above all, you want to know why-oh-why they keep making that awful shrieking noise.

And although Prince George probably took the news of his future sibling with grace and dignity, like any royal would, could you blame him for worrying? Brotherhood doesn't end when the diapers come off — it's for life. And take it from the Hemsworths and the Kardashians — being an older sibling is a lot of fun, but it is also a lot of hard work. Luckily, Prince George isn't the first to take on that role. Here are 11 books about other brothers to help teach him the ropes:

Every child has one (or in my case a dozen) Berenstain Bears books. If George wants to prepare his household for a new baby, this book is a great starting point. The adorable and loving family welcomes a new child with open arms while maintaining their love and affection for big brother. It's a sweet and reassuring tale of new siblings.

What Brothers Do Best by Laura Numeroff

If Prince George has any questions about what siblings do together, this book has all the answers. From pushes on the tire swings to swimming to puzzles, the adorable animal brothers in this book do it all together. But What Brothers Do Best will ultimately teach George that being there for each other is the greatest things siblings do together.

When George wants a partner for the seesaw, it might be hard for him to understand why his new sister can't sit on the other side. Hilarious and charming, Dianne Danzig's Babies Don't Eat Pizza can teach George all about what happens before and more importantly after your baby sister is born, because pizza is just one of the many things that babies can't eat.

With a new baby on the scene, it might seem easy for Prince George to feel like he's losing something. One Special Day can show him all of the things he will gain from being a big brother. Big brothers get stronger, braver, gentler and this book proves there is so much more to gain than there is to lose.

Tales of a Fourth Grade Nothing by Judy Blume

When George gets older and his baby sister goes from being a bouncing bundle of joy to a the Terrible Twos, he might start thinking about putting his sibling up for adoption. No one can empathize better than Judy Blume's hilarious hero, Peter Hatcher, who has a devious little brother himself. More than 40 years old, the Fudge series is as relatable as ever.

Harry Potter and the Chamber of Secrets by J.K. Rowling

When it comes to brotherly love, the Weasleys take it to the next level. All seven siblings are fiercely loyal and protective of one another, which comes in handy considering the amount of danger they find themselves in. In this second installment of the classic series, Ron Weasley risks his life and the life of his friends to save his younger sister, Ginny. What better example of a big brother is there?

The Clay Lion by Amalie Jahn

What would you sacrifice for your younger sibling? In Amalie Jahn's tale about destiny and sibling love, older sister Brooke risks everything and everyone she loves to try and save the life of her younger brother. An early lesson in loyalty, protection, and unbreakable faith among siblings.

The Outsiders by S. E. Hinton

If George wants to learn about strong sibling relationships through the good times and more importantly the bad, then he should look no further than S. E. Hinton's The Outsiders . You'd be hard-pressed to find more supportive and committed siblings than Ponyboy, Darry, and Sodapop, who would do anything — even risk their own lives — for one another.

The best kind of siblings are the ones who you can also call your friend. Jem and Scout could teach Prince George a lesson or two in comradely (and mischief) among siblings. Not to mention that the pair are always willing to help each other out. Whether it be a rabid dog or a neighborhood bullies, they have each other's backs.

Watership Down by Richard Adams

Big brothers come in all shapes and sizes... and in this case, species. When little brother Fiver predicts a threatening future, it is up to his older brother Hazel to lead them to safety and ensure the survival of their clan. Considering Prince George's future job, this might be a good book for him to read on more than one level.

Relationships between siblings are complicated, and that only becomes more and more accurate as they get older. William Faulkner has a thing or two to say about that. Despite their tragic and complicated relationships, the Compson siblings are forever connected by the unbreakable bond of family.

More like this
Nicola Coughlan Shared A Lady Whistledown Excerpt From ‘Bridgerton’ Season 3
By Grace Wehniainen, Alyssa Lapid and Sam Ramsden
Viserys’ Fate On 'House Of The Dragon' Could Differ From The Book In This Surprising Way
By Grace Wehniainen
Ling Ma Is Back — This Time, With Yetis
By Kate Dwyer
Romance Authors Are Mobilizing For Reproductive Rights
By Natalia Perez-Gonzalez
Get Even More From Bustle — Sign Up For The Newsletter