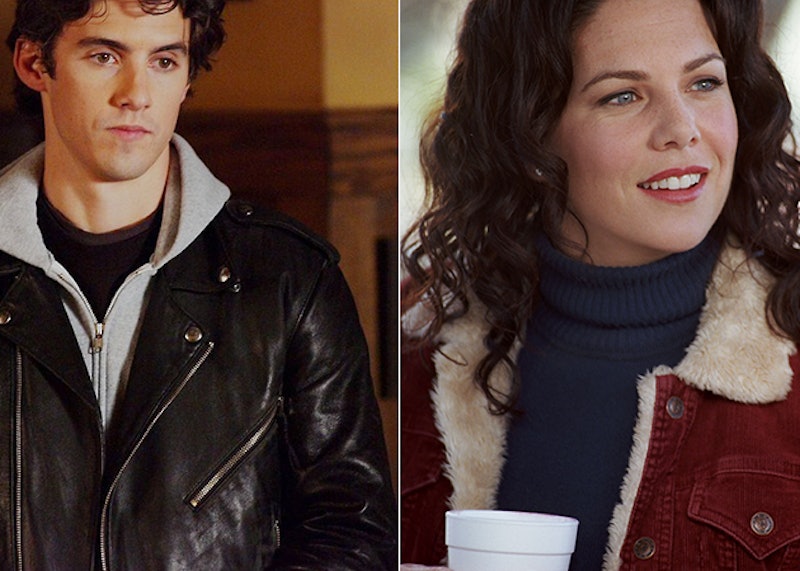 Lorelai and Jess were never each other's biggest fan on Gilmore Girls. Lorelai didn't think Jess was good enough for Rory, and Jess thought Lorelai — yes, Lorelai! — was everything that was wrong with adults. Their antagonistic behavior made life difficult for Rory throughout Gilmore Girls Seasons 2 and 3. The thing that added an extra layer of poignancy to the whole situation was Lorelai and Jess were basically the same person. Stay with me here.

In another life, these two rebels without a cause would have been friends. The real problem was that, when Lorelai met Jess, she was already an adult, and he was threatening to take Rory way out of her comfort zone. Teenaged Lorelai would have loved to bond with someone like Jess. His anti-authoritarian attitude, his constant sarcasm, and his desire to put as much distance between himself and his messed up family as possible are all sentiments Lorelai echoed not only in her youth, but in her adulthood as well.

Rory was always Lorelai's opposite in many ways. As much as the mother and daughter had in common, Lorelai made sure Rory grew up feeling safe and loved. When Jess came along, Lorelai had visions of Rory's future slipping away — but if Jess had never shown any interest in Rory, Lorelai would have made the perfect mentor for Luke's nephew.

They Were Both Runners

Jess and Lorelai came from very different backgrounds, but they both raised themselves. Their home lives made them feel limited and stifled. As a result, they became runners. Liz was never there for Jess, and he didn't meet his father until it was way too late to matter. He ended up with some pretty hefty emotional baggage as a result, so he ran whenever anyone showed the slightest hint that he might be worth the effort.

Lorelai walked out on her old life and barely looked back. Not long after Rory was born, she took her daughter and left Hartford behind. Notice that after she had Rory, she never brought a single man she was romantically involved with home until Max. She said it was for her daughter's sake, and I'm sure that was partly true, but the biggest issue was her own fear of getting close to people who could leave her. She bailed on Max the weekend they were supposed to get married in a manner not so dissimilar from how Jess took off to California without a word to Rory.

They Made Their Own Way in the World

It is not just that Lorelai and Jess both knew they wanted to escape from their lives; it's that they both went out and made their lives exactly what they wanted them to be. There were a lot of bumps in the road on the way to Lorelai opening The Dragonfly Inn and Jess writing a book/opening an independent bookstore. He worked at Walmart and slept on dirty floors, while Lorelai worked as a maid and turned a shed into a home.

The odds were against them both, but Jess and Lorelai are fighters, and no amount of disapproval could stop them from starting fresh. They even dropped out of school, a decision known to lead most people down a difficult road in the future. But they kept working until they put themselves on a path that made sense to them.

It Took Them a Long Time to Appreciate Their Families

Both Jess and Lorelai had to leave their families behind before they could fully appreciate what it meant to have them as part of their support system. Lorelai grew up resenting Richard and Emily, and her feelings were only compounded by her shame over asking them for money to pay for Chilton. While she continued to argue with her parents right up until the series ended, she grew closer to both of them and came to enjoy having them in her life for the big moments (Rory's graduation) and the small (when she taught Emily the wonders of owning a DVD player).

By comparison, it did not take Jess nearly as long to come back to Stars Hollow and thank Luke for everything he did for him. Jess spent a few years being ungrateful and angry, but he ultimately came to realize that, even though Luke and Liz were not perfect, they both loved him and wanted the best for him.

They Turned Sarcasm Into an Art

Maybe it was a defense mechanism or maybe they were born snarky, but no one tossed out witty comebacks quite like Lorelai and Jess. (Well, aside from Emily.) Even if these two never learned to appreciate each other for their deeper similarities, I like to believe they both harbored admiration for each other's witty, biting verbal stylings.